An influence line is a graph showing, for any given beam frame or truss, the variation of any force or displacement quantity (such as shear force, bending moment, tension, deflection) for all positions of a moving unit load as it crosses the structure from one end to the other.

An influence line is a graph showing, for any given beam frame or truss, the variation of any force or displacement quantity (such as shear force, bending moment, tension, deflection) for all positions of a moving unit load as it crosses the structure from one end to the other.

(i)                Influence lines are very useful in the quick determination of reactions, shear force, bending moment or similar functions at a given section under any given system of moving loads and

(ii)             Influence lines are useful in determining the load position to cause maximum value of a given function in a structure on which load positions can vary.

1.A simply supported beam of span 10m carries a udl of 20 kN/m over its central 4m length. With the help of influence line diagram, find the shear force at 3m from the left support.

Muller -Bresalu principle states that, if we want to sketch the influence line for any force quantity (like thrust, shear, reaction, support moment or bending moment) in a structure,

(ii)             we apply on the remaining structure a unit displacement corresponding to that forces quantity.

For the two member determine bent in fig. sketch the influence line for VA.

If we deftly apply Muller -Breslau to the problem, we can first remove support A and push A up by unit distance. Since the angle at B will remain unchanged, our unit displacement will result in a rigid body rotation of ?(=1/4 radian) about C. So the column CB will also have a horizontal displacement. (For the part AB, the diagram is just the influence line diagram for shear in a S.S beam)

The diagram for BC must be understood to be the influence of horizontal loads on the column on RA.

principle on which indirect model analysis is based

The indirect model analysis is based on the Muller Bresalu principle.

To get the influence line for any force quantity (i) remove the restraint due to the force, (ii) apply a unit displacement in the direction of the force.

Begg'sdeformeter is a device to carry out indirect model analysis on structures. It has the facility to apply displacement corresponding to moment, shear or thrust at any desired point in the model. In addition, it provides facility to measure accurately the consequent displacements all over the model.

Dummy length is the additional length (of about 10 to 12 mm) left at the extremities of the model to enable any desired connection to be made with the gauges.

Three types of connections possible with the model used with

Use of a micrometer microscope in model analysis with Begg's deformeter

Micrometer microscope is an instrument used to measure the displacements of any point in the x and y directions of a model during tests with Begg'seformeterd.

Name the types of rolling loads for which the absolute maximum bending moment occurs at the mid span of a beam.

The portal frame in fig. is hinged at D and is on rollers at A. Sketch the influence line for bending moment at B.

To get the influence line diagram for MB, we shall introduce a hinge at B (and remove the resistance to bending moment). Now we get a unit rotation between BA and BC at B.

BC cannot rotate since column CD will prevent the rotation. BA would rotate freely (with zero moment). For ?=1 at B, displacement at A = 3m. The displaced position shows the influence line for MB as shown in fig.

To find maximum shear force and bending moment at 5m from the left support:

By inspection of the ILD for shear force, it is evident that maximum positive shear force occurs when the load is placed just to the right of D.

Maximum bending moment occurs when the load is placed on the section D itself.

3.Draw the ILD for shear force and bending moment for a section at 5m from the left hand support of a simply supported beam, 20m long. Hence, calculate the maximum bending moment and shear force at the section, due to a uniformly distributed rolling load of length 8m and intensity 10 kN/m run.(Apr/May 05)

Maximum bending moment at a D due to a udl shorter than the span occurs when the section divides the load in the same ratio as it divides the span.

Maximum positive shear force occurs when the tail of the UDL is at D as it traverses from left to right.

Maximum negative shear force occurs when the head of the UDL is at D as it traverses from left to right.

4.Two point loads of 100 kN and 200 kN spaced 3m apart cross a girder of span 15m  from  left  to  right  with   the  100  kN  load  loading.  Draw the influence line for shear force and bending moment and find the value of maximum shear force and bending moment at a section, 6m from the left hand support. Also, find the absolute maximum moment due to the given load system. 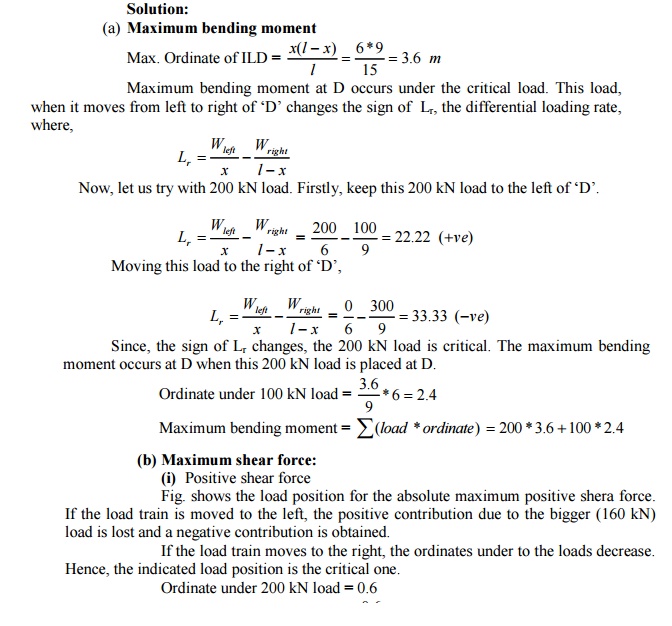 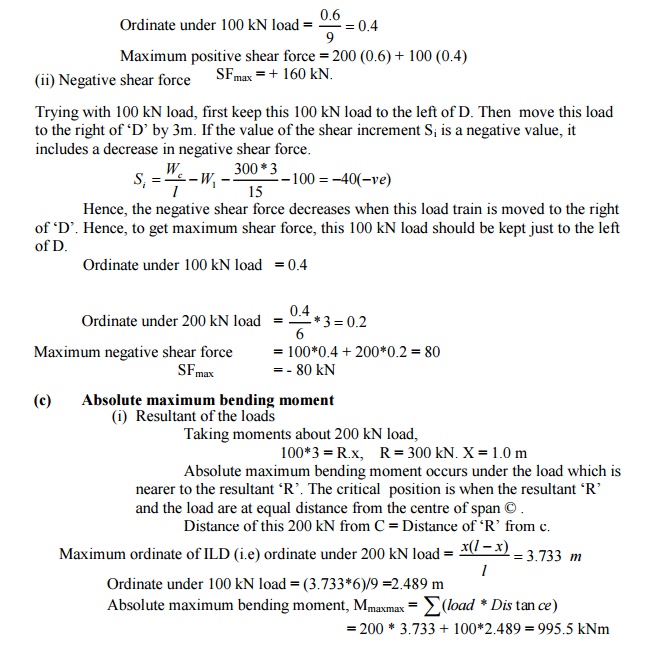 To determine the load position to get the maximum positive shear force, let us keep all the loads to the right of C. Then move W1 load to the left of 'C'by2.5 m. if the sign of shear increments Si is negative, it will indicate that W1 shall be retained at C

C = Distance through which the load train is moved = 2.5 m

Since Si is negative, it undicates that to get maximum positive shear force, W2 should stay just right of C. 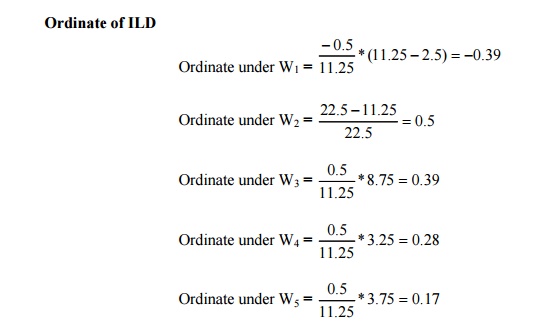 First let us move the leading W5 to the right of C by 2.5 m and calculate Si

Since Si is -ve it indicates that W5 should stay just to the left of C. 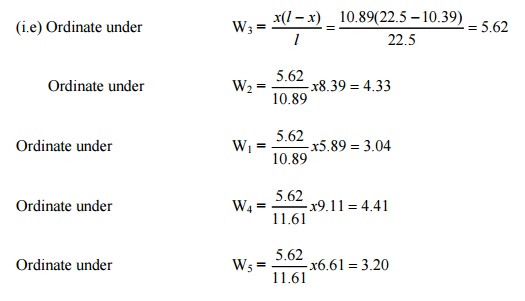 6) A girder a span of 18mis simply supported at the ends. It is traversed by a train of loads as shown in fig. The 50 kN load loading. Find the maximum bending moment which can occur (i) under the 200 kN load (ii) Under 50 kN load, using influence line diagrams.

To get the maximum bending moment under W3 the resultant R and W3 should be at equal distances from the center of the span C.For that the point of action of resultant R should be determined first.

a)  Resultant of loads: 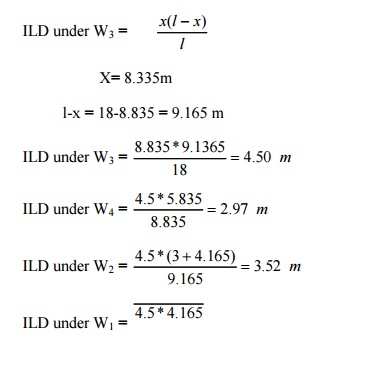 Bending moment under the 200 kN load

6.Draw the I.L for reaction at B and for the support moment MA at A for the propped cantilever in fig. Compute the I.L ordinates at 1.5 m intervals.

Remove the restraint due to RB (remove support B) Apply a unit displacement (upward).

When RB = 1, then YXB is the displacement at section x due to unit load applied at B. 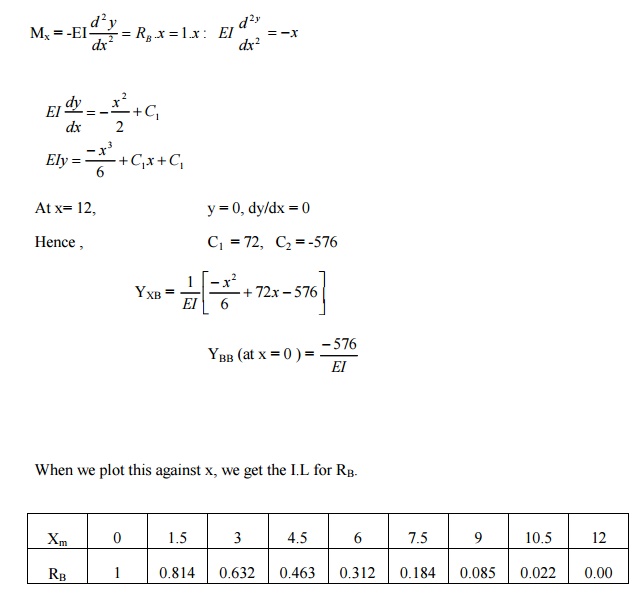 Fig. is the influence line diagram for RB.

To get the I.L for MA have to

Since the udl is longer than the , the criterion for maximum bending moment at a section is that the whole span should be loaded as shown in fig.

Maximum negative shear force at a section occurs when the head of the load reaches the section ((i.e. when the left portion AX is loaded and right portion XB is empty)

Maximum positive shear force occurs at X when the tail of the load is at X as it moves from left to right. (i.e. AX is empty and the portion XB is loaded)