This is endemic in much of Central America and AA textbook of tropical medicine should be consulted for more details on this subject.frica where it is an important cause of blindness.

A textbook of tropical medicine should be consulted for more details on this subject.

This is endemic in much of Central America and Africa where it is an important cause of blindness. The buffalo gnat (Simulium species) carries the filarial worm to humans. Infested humans become itchy with an excoriated papular eruption. Later the skin may thicken and become hyper- or hypopigmented. Dermal nodules are found, mainly near bony prominences, and contain both mature worms and microfilariae. It is the latter that invade the eye, leading to blindness. The diagnosis is confirmed by detecting active micro-filariae in skin snips teased out in saline and examined microscopically. Ivermectin is now the treatment of choice. A single dose produces a prolonged reduction of microfilarial levels, and should be repeated every year until the adult worms die out. Diethylcarbamazine and suramin are now obsolete.

This is endemic throughout much of the tropics. The adult filarial worms, usually Wuchereria bancrofti, inhabit the lymphatics where they excite an inflam-matory reaction with episodes of lymphangitis and fever, gradually leading to lymphatic obstruction and lymphoedema, usually of the legs or scrotum. Such swellings can be massive (elephantiasis). There is an eosinophilia and microfilariae are found in the peripheral blood, mainly at night; their vector from human to human is the mosquito, in which the larvae mature. Diethylcarbamazine or ivermectin is the treatment of choice.

The larvae of hookworms that go through their full life cycle only in cats or dogs can penetrate human skin when it is in contact with soil or sand contamin-ated by the faeces of these animals. The larvae move under the skin creating tortuous red itchy lines (Fig. 15.10) that advance at the rate of a few millimetres a day. The larvae do eventually die, but this can be speeded up by a single oral dose of ivermectin. 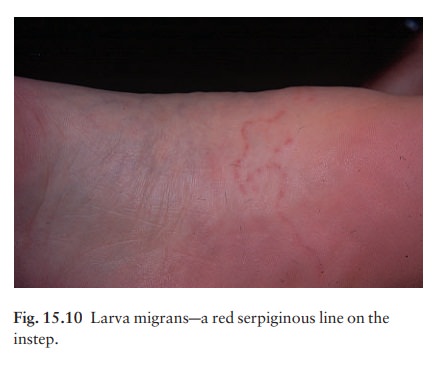 •   Swimmer’s itch, in tropical and lake waters, may be caused by the penetration through the skin of the cercariae of schistosomes of human and non-human origin. The skin should be towelled off immediately

after swimming to prevent the schistosomes penetrat-ing the skin as it dries.

•   The larval stages of the pork tapeworm (cysticer-cosis) can present as multiple firm nodules in the skin.

•   Larger fluctuant cysts may be caused by hydatid disease.