Shrimps show erratic swimming behavior, rising slowly to the water surface, hanging and rolling over until the ventral side is up.

Shrimps show erratic swimming behavior, rising slowly to the water surface, hanging and rolling over until the ventral side is up. Eventually, the animal sinks to the bottom.

Shrimps would eventually right themselves up, become weak and lose their appetite for food. They repeat the process of rising to the surface and sinking until they die usually within 4-12 h. The shrimps manifests decreased preening and delayed molting. Acutely affected shrimps develop white opaque abdominal muscles, bluish to distinctly blue cuticular color often with mottled buff to tan pigment patches in the cuticular hypodermis and very soft cuticles.

They have poor resistance to stress. Mortality rates of above 90% were observed among penaeid juveniles in intensive culture systems. The virus infects cells of the ectodermal tissues (epidermis, hypodermal

epithelium of foregut and hindgut, nerve cord and nerve ganglia) and mesoder-mal tissues (hematopoietic organs, antennal gland, connective and striated muscles, heart, gonad, mandibular organ, hemocytes). It induces the develop-ment of eosinophilic inclusion bodies in the cytoplasm of affected cells during the early acute stage of the disease, followed by necrosis and inflammation of target tissues. The presence of the virus can cause death of the cells of the cuticle, blood-forming tissues and connective tissues of the shrimp that leads to abnormal metabolism and eventually mortalities. Inclusion bodies are com-mon early in acute infections, later decreasing in number followed by necrosis and inflammation of target tissues.

The disease can be experimentally induced in P. setiferus, M. japonicus, P.aztecus and P. duorarum. It has been linked to the Runt deformity syndrome in L. vannamei. Secondary bacterial infection may occur. Some survivors of epi-zootics may carry the virus for life. 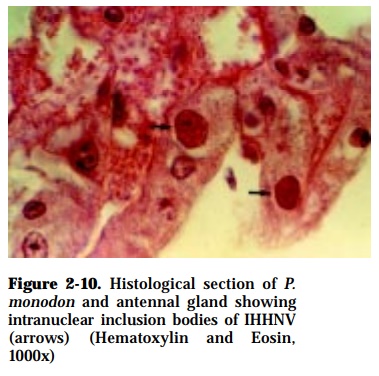