They initiated the process of industrialization under the Industrial Policy Resolution 1956 and in all the five year plans industrialization was given due importance. The initiatives of the governments led to a considerable increase in industrial production making India the sixth most industrial country in the world. The development in industries spread across both small scale and large scale and included consumers, intermediate and capital goods. 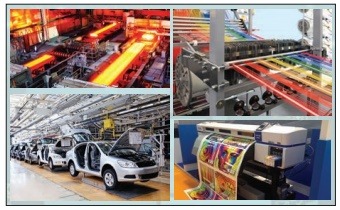 Due to the progress in industrialization a change in foreign trade of India could be seen. India increased the export of engineering goods. Correspondingly, there was development of technological and managerial skills as the industries had to be operated and also planning and designing of the industries had to be done in an efficient manner. Heavy industries were developed and high technical capability also had to be developed in terms of improved infrastructure, advanced technology and appropriate production equipments. The engineering industry was the key to the industrial development of India. It had to be developed as per the strategy of the planners to accelerate industrialisation in India.

During the planning process, there was development of basic and capital these industries increased from 50 percent in 1959 to 79 percent in 1990-91. This showed an increase in employment. The number of workers in factories and mines increased tremendously. Industrialization improved the iron and steel, fertilizers, chemicals, cement and non-ferrous metals industries. New capital goods industries were started and developed.

During this period, there was a huge expansion of infrastructural facilities in the country. The petrochemical industries developed with efficient refineries, pipelines, storage and distribution systems. These were drastic changes in the economy with improved irrigation system, storage works and canals, hydro and thermal power generation, improved railway system and well laid national and state highways. Better transportation and developed telecommunication system were instrumental in connecting India to the rest of the world.

With the introduction of economic reforms in India, there were changes in the industrial pattern of India. There was faster growth of capital goods and consumer goods and there was a slowdown in the rate of growth of basic industries. The growth in banking, insurance and commerce and also the expansion and modernization of ports, shipping and both domestic and international air services have all been due to these economic changes which led to enlargement in industries.

An effective industrial policy is essential for any industrialised nation. It enables the state to have proper policies, rules and regulations so that the industries can be regulated and the process of industrialization benefits the economy and the society. 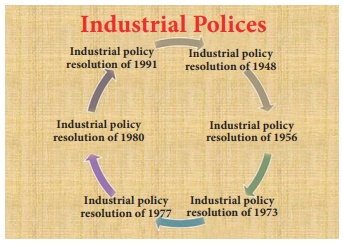 As the Indian system incorporated the concept of a mixed economy, the Industrial Policy Resolution adopted in 1948 emphasised that both the public sector and private sectors would function in their respective spheres. All the key industries were to be under the control of the central government. The public sector had control over arms and ammunitions, the production and control of atomic energy, railways etc. which were to be the exclusive monopoly of the central government. The state also had control over coal, iron and steel, aircraft manufacturing, ship building etc.. Private enterprises and the cooperatives managed the remaining industries.

An industrial policy was announced by the congress government in July 1980. It stressed on a pragmatic approach towards development acknowledging the Industrial Policy Resolution of 1956. It emphasised on an integrated industrial development with setting up of nucleus plants in industrially backward regions. Small scale units and cottage industries were to be started which could function more effectively using improved technology. It aimed at promoting a concept of economic federalism.

The industrial policy of 1980 made considerable changes by bringing about a liberalised licensing policy by which the large undertakings were much benefitted as they were made free from the MRTP Act and FERA. The government delicensed industries which were located in the areas that were declared as backward. The concept of broad banding was introduced. This gave flexibility to the manufacturers in production as the products could be designed as per the demands of the market.

A new industrial policy was introduced by the P.V.Narasimha Rao government in July 1991. This was a landmark in the economic history of the nation because the government had introduced its policy of liberalization.

The Act from centralized bureaucratic control. The conditions of public enterprises was reexamined as they showed very less rate of growth. So, entrepreneurs were freed from restriction of MRTP Act and restrictions on direct foreign investment was removed. The Indian economy was integrated with the world economy through this policy of liberalization. Major reforms were introduced in the areas of industrial licensing, foreign investment, foreign technology, public sector policy and MRTP Act.

Changes were made with regard to industrial licencing which was abolished for many industries. As per the new Act,18 industries were included for compulsory licensing. Some of the industries in this category were coal and lignite, petroleum, sugar, industrial explosives, hazardous chemicals, electronic aerospace and defence material, drugs and pharmaceuticals etc..It comprised of industries which were related to security concerns, health, environment etc. In 1993, three more industries were removed from the list of 18 industries under the compulsory licensing. They were motor cars, white goods (which include refrigerators, washing machines, air conditioners etc.) and raw hides and skins and patent leather.

Rehabilitation schemes were introduced with the help of the Board for Industrial and Financial Reconstruction (BIFR) so that the public enterprises whose performance was poor could be improved. During such a rehabilitation process, the interest of the workers of such industries was to be protected.

The Monopolies and Restrictive Trade Practices Act (MRTP),1969 was repealed by the Ministry of Corporate Affairs and this was replaced by the Competition Act,2002 which was later amended in 2007 and 2009. The MRTP Act had the objective of preventing the concentration of money and checking unfair practices in trade so that monopolistic practices could be stopped. But, the new Act encouraged freedom of trade so that there was healthy competition and the consumer could get the best products. Emphasis was given to regulating the activities of the companies. The companies did not have to get the prior approval of the government in making changes in their establishments.

In spite of many efforts towards industrialization, there are also few inadequacies. India still has the problem of unemployment and underemployment. Uniform development in all regions is a challenge to the policy makers and the larger society. Even after long years of independence and industrialization, governments have to still design programmes for poverty eradication. The industrialization process leads to the development of large sectors but the small and medium sectors still have a long way to go. More and more industries are concentrated in cities. In terms of development there is a vast difference between the urban areas and the rural areas. Issues relating to urbanization and migration are bigger challenges to the state.

Make a presentation on large scale industries in India.