Agriculture has been the most intensive form of economic activity leading to 12-15% of its contribution to GDP.

Agriculture has been the most intensive form of economic activity leading to 12-15% of its contribution to GDP. Agriculture is not only for sustaining the food grains and vegetation to cater to the requirements of the growing population but has its contribution in creating largest employment sector, fostering one large section of the Indian industry called Agrarian Industry and has been contributing and earning foreign exchange to our nation. Agriculture is not just grains alone, but it spreads to various Agricultural Tertiary sectors such as Coconut Farming, Orchids and cash crops such as Cashew Nuts, Coffee, Tea, Pepper and Vegetables.

The primary need to sustain Indian agriculture to cater the growing requirements of the population was felt immediately after Independence. However the nature of importance that was given to Agriculture varied from the First Five Year plan to 12th Five Year Plan. Because in the initial years after independence, the importance was given to setting of industry and industrial system in India. In the first 10 years after Independence, with the continuous adoption of primitive technology of farming the agricultural outcome was able to meet the basic needs of the population that was growing around 2.5% annually. It was during the 1960’s when India began to face the shortfall in meeting the population needs. Because, the Food Grain production did not increase to cater to the needs of the population. This led to the Green Revolution. 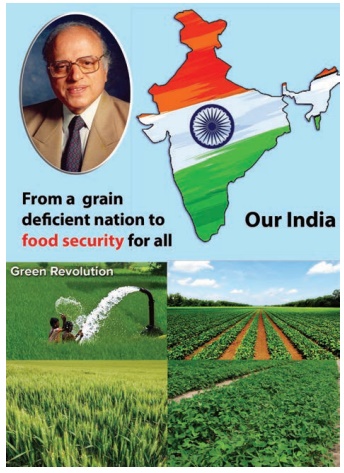 As we all know that India is basically an agricultural country with the growing population dependent on agriculture. With the experience of India’s first two five-year plans, it was realised that agriculture in India had serious shortfalls namely,

a) It was not able to produce required grains to suit the growing population. Insufficiency in production due to the traditional agricultural practice which was primitive in use of technology.

b) The pattern of agriculture was not only very primitive but farmers relied on long term crop patterns which took long time to see the results.

c) Since India is a monsoon dependent state the agricultural output was dependent on the nature of rainfall, insufficient rain fall resulted in drought which affected the grain production in India leading to famine, starvation and deaths.

During 1960’s a New Agriculture Policy was formulated on the basis of suggestions given by the Ford Foundation. In its report ‘India’s Crisis of Food and Steps to Meet it’ the Ford Foundation’s agricultural experts suggested certain reforms. The Government of India introduced the reforms in agriculture. These reforms were adopted as a collective programme in order to bring existing and new irrigation facilities, application of fertilizers, hybrid seeds that can bring high yield, pesticides, insecticides etc.. This new way was gradually adopted in Indian agriculture. This was called GREEN REVOLUTION. The plan for Green Revolution was formulated by the notable Indian agriculture scientist Dr. M.S. Swaminathan who was later known as Father of India’s Green Revolution. In simple terms, the increased use of fertilizers and irrigation are known collectively as the Indian Green Revolution. The Green Revolution took place between 1967-78 which resulted in 50% increase in agricultural production.

In the initial stage, this programme was implemented around 2 million hectares of area. Gradually the coverage of the programme was enlarged and total area covered by this Green Revolution programme was estimated as 70 million hectares which accounted to 40% of the agricultural cover. Consequently, farming activities began to take throughout the year, that is, from single cropping pattern to multiples of cropping and mixed cropping, which meant not just the cultivation of wheat or rice alone as in the traditional farming pattern. Due to the geo-climate variations in different parts of India, farmers in India adopted different types of cropping pattern. Northern States of India like Punjab, Haryana and Uttar Pradesh quickly found better results with regard to wheat, while Southern states like Karnataka, Tamil Nadu etc found lesser rate of success in regard to cultivation of rice. However, the over all result in the long run was more impressive to alleviate food shortage.

Volume of agricultural outcome increased by two to three fold compared to the period in 1950’s. The increased production of rice, wheat, cereals and vegetables had erased the humiliation that India had to import grains from the United States during the PL-140 programme in 1950’s. Moreover the agricultural goods were freely available to the people in the open market.

Due to intensive cropping throughout the year, the demand for agricultural employment increased. The demand was felt in two groups namely, unskilled agrarian labour to work in the farm and qualified agricultural engineers and experts to help and facilitate the knowledge regarding scientific farming.

The Green Revolution in India not only brought a change in agricultural activity, but also brought a healthy relationship between market and industry. As the scientific farming was more dependent on agricultural engineering such as farm equipments, tractors etc., industries began to show interest to produce farm equipments to suit the increasing demand at low cost. At the same time the market also began to play effective role in processing and supplying the products to the consumers.

One of the major problem faced by the states in India was that the Green Revolution was beneficial only to those states where the soil was fertile. Hence, states that produced in excess distributed their output to other states which were climatically dry such as Vidarbha and Telangana. Hence, inter-state agrarian market began to grow to cater the needs of the consumption. Concequently, the import burden came down drastically.

Farmers holding very small pieces of land had to compete with the large land holders with regard to finance, infrastructure and agrarian market forces. This led to marginalization of farmers and they were disinterested towards new techniques in farming. Hence, there was variations among farmers and also variation in various regions across India.

Major Shortfalls of the Green Revolution

The following factors have been the shortfalls due to Geo-Climatic factors in India.

2. Widened the gap between rich and poor agriculturist.

3. Lack of finance among small scale farmers to put up with initial investment

4. It forced the farmers to use harmful fertilizers and pesticides to increase the crop output.

5. Lack of socialization and preparedness with regard to adopting new technology.

6. It has become a never ending process due lack of adequate check on population overgrowth.

1. It brought down the scarcity of food grains.

4. Cash and spice crops were also given equal importance which led India to export cash crops to various countries resulting in high export earnings. However, other necessary crops like sugarcane, oilseeds and cereals were not shown adequate interest by the farmers. Their importance was felt only during 1970’s and early 1980’s.

Visit a village and observe the farming activities. Understand ownership, tenancy, agricultural activities and the nature of farming in the village.

Understand roof top gardening, vertical gardening and organic farming and do an experimentation of the same.