BY SICK INDUSTRIAL COMPANIES(SPECIAL PROVISIONS) ACT, 1985, SEC 3(1) (0): “Industrial company(being a company registered for not less than five years) which has at the end of any financial year accumulated loss equal to or exceeding its entire net worth and which has also suffered cash losses in such a financial year immediately preceding such financial year”.

“Industrial company(being a company registered for not less than five years) which has at the end of any financial year accumulated loss equal to or exceeding its entire net worth and which has also suffered cash losses in such a financial year immediately preceding such financial year”.

BY THE COMPANIES(SECOND AMENDMENT) ACT, 2002

Defines a sick company as one:

Which has accumulated losses in any financial year to 50 percent or more of its average net worth during four years immediately preceding the financial year in question, or

Which has failed to repay its debts within any three consecutive quarters on demand for repayment by its creditors. 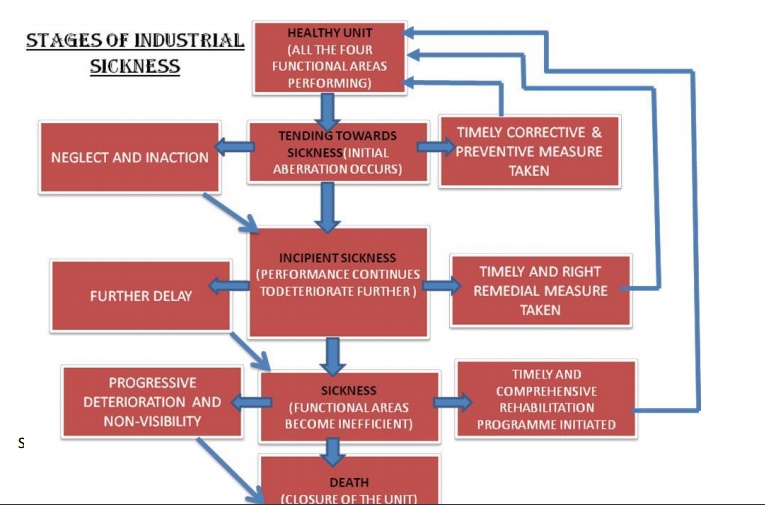 Continuous decline in gross output compared to the previous two financial years. Delays in repayment of institutional loan, for more than 12 months.

Delay In Advancing Of Funds

Wastages of scarce resources Loss of revenue to government

The Industrial Finance Corporation of India (IFCI) in 1948 - to provide medium & long-term credits to the public sector limited companies in order to facilitate post-war rehabilitation & development.

2. The State Financial Corporations (SFC) were established at state level in 1951 to supplement the work of

3. Industrial Reconstruction Corporation of India or (IRCI) was set up with its head quarters at Calcutta in 1971

•         to revive and revitalise the closed and sick industrial concerns by removing the shortcomings.

•         to reconstruct and restructure the financial base as well as the management of the assisted units, besides providing financial assistance and technical/managerial guidance.

ii.           appointment of IRCI nominees in the Board of Directors of the sick unit;

iii.          appointment of personnel and nominees in key managerial post and purchase/sales committees;

4. Industries (Development & Regulation) Act, 1951 was further amended in 1971 -empowering the Central Government to take over industrial undertakings which special emphasis on sick units.

5. By Amendments in the relevant Act the IFCI with effect from 1972 was empowered to extend its assistance to Pvt Ltd Cos.

6 Foreign Exchange Regulation Act (FERA) 1973 – limited the share of foreign companies to 40% of the total capital.

7.  The Reserve Bank of India set up Tandon Committee, in 1975- guideline was laid down governing the participation of banks in the management of various sick industries.

8. The RBI in 1979 conducted a study to identify the causes of sickness in 378 such large industrial units

9. Further the government came up with several industrial policies in order to revive the sick units

•         introduced in 1976 to provide financial assistance to five selected industries (jute, cotton, cement, textile and sugar) on concessional terms for modernization & rehabilitation of their old machineries.

•         In 1984 this scheme was modified into soft loan scheme for modernization –all categories of industries are eligible for financial assistance for up gradation of process/technologies/product, export orientation/import substitution,energy saving, anti-pollution measures and improvement in productivity.

•         Healthy was allowed to carry forward and set off the accumulated losses & unabsorbed depreciation of the sick unit against its own tax incidence.

•         Sick units to be eligible for merger should have >100 employees & assets worth >50 lakh. Governmental measures to combat industrial sickness

•   These directors will be nominated to the board of the sick units and they will be required to report to the financial institutes regularly regarding the various measures required to be incorporated.

•   Further the respective state government in collaboration with the financial institutes should provide financial & managerial assistance for the restructuring and rehabilitation of the sick units.

•         Aimed at preventing industrial sickness, quick rehabilitation, & early decisions on the future of such units.

The line of production is critical to the nation‟s economy

Its a mother unit with large ancillaries

Its closure would cause dislocation and unemployment of such a large number of people that allocation of alternative jobs is not possible.

Government has from time to time formulated several committees like the Standing Committee On Industrial Sickness, State Level Inter-Institutional Committee, Guidance Committee & others to examine the problems of growing industrial Sickness

Various provisions for the revival of the sick industries were introduced like The Relief Undertaking Act,

The important provisions of SICA were:-

and for liquidation of non-viable companies.

AAIFR was constituted for hearing the appeals against the orders of the BIFR.

BIFR would make an inquiry as it may deem fit for determining whether any industrial company had become sick.

BIFR may appoint one or more persons as special director(s) of the company for safeguarding the financial and other interests of the company.

The proper management by change in or take over of the management of the company; The amalgamation of the sick industrial

The sale or lease of a part or whole of the sick industrial company;

Such other preventive, ameliorative and remedial measures as may be appropriate;

Such incidental, consequential or supplemental measures as may be necessary or expedient in connection with or for the purposes of the measures specified above.

The important provisions of SICA were:-

Under the Act, whosoever violates its provisions or any scheme or any order of the Board or of the Appellate Authority, shall be punishable with imprisonment for a term which may extend to three years and shall also be liable to a fine.

The new Act diluted some of the provisions of SICA & aimed to combat industrial sickness ,reduce the same by ensuring that companies do not view declaration of sickness as an escapist route from legal provisions after the failure of the project or similar other reasons and thereby gain access to various benefits or concessions from financial institutions.

•         RBI has constituted a standing coordination committee to consider issues relating to coordination between commercial banks and lending institutions.

•         A special cell has been set up within the rehabilitation finance division of IDBI to attend the case of sickness.

•         RBI has issued suitable guidelines to the banks to ensure the potentially viable sick units receive attention and timely support from banks.

•         RBI has clarified that units becoming sick on account of wilful mis-management, wilful

default should not be considered for rehabilitation.

b)    Development of a suitable management information system

c)     A settlement with the creditors for payment of their dues in a phased manner, taking into account the expected cash generation as per viability study

d)    Determination of the sources of additional funds needed to refinance.

e)     Modernization of plant and equipment or expansion of an existing programme or even diversification of the products being manufactured.

f)      Concession or reliefs or assistance to be allowed by the state level corporation ,financial institutions and central government.

I.           A Financial reorganisation may involve some sacrifices by the creditors and shareholders of the undertaking which can be in several forms:-

II.           Monitoring and nursing the sick units during infancy

III.          Incentives should be provided to professional managers helping in reviving sick units

IV.   Issuing guidelines on major aspects that affect the image of the company

V.          Brain storm with a select group to get creative ideas for improvement

VI. Adopt better practices, right technology, better work culture and professional management so that the sick industries can improve their health as well as the economy.