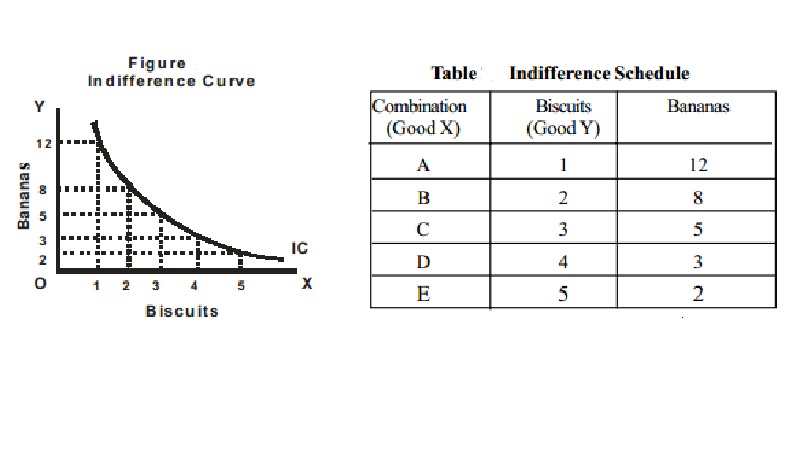 An indifference curve is the locus of different combinations of two commodities giving the same level of satisfaction.

Marshall's demand analysis is based on the cardinal measurement of utility. The approach is criticised for two reasons.

1.        Utility is a psychological phenomenon and

Hence, the indifference curve approach based on ordinal ranking preference was evolved. Vilfred Pareto, Wicksteed and Slutsky developed this approach. Two noted English economists Prof. J.R. Hicks and Prof. Allen provided a refined version of indifference curve approach. According to Hicks and Allen, utility cannot be measured. It can only be ranked or ordered. The consumer can rank his preference very easily and say which is better than the other.

An indifference curve is the locus of different combinations of two commodities giving the same level of satisfaction.

3.        The price that a consumer pays for a commodity indicates the level of utility derived by him.

Let us assume that the consumer buys two commodities - bananas and biscuits. Then the indifference schedule will be: 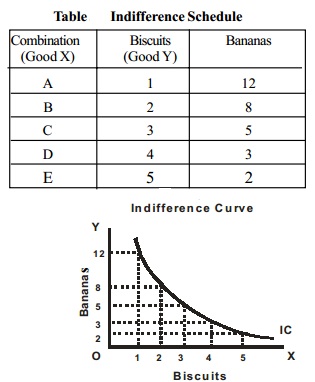 All the points on this curve give equal level of satisfaction to the consumer. Indifference curve is otherwise called 'iso -utility curve'. 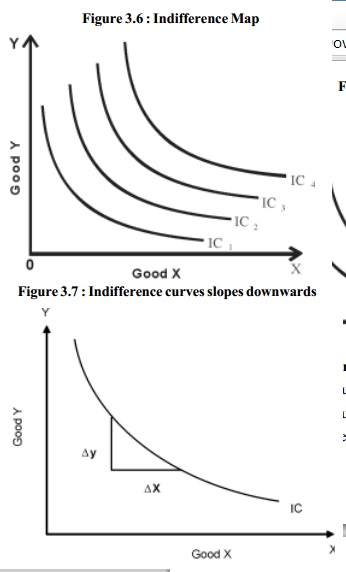 Properties of an Indifference curve

2.        Indifference curves are convex to the origin

No two indifference curves can ever cut each other.

All indifference curves slope downwards from left to right

All indifference curves are convex to the origin

This is because of the operation of a principle known as 'Diminishing Marginal Rate of Substitution'. The indifference curves are based on this principle. If they are concave to the origin, then it will mean that MRS is increasing. Indifference curve cannot be straight line except when the goods are perfect substitutes.

Marginal rate of substitution between X and Y referes to the amount of commodity Y to be offered in exchange for one unit of X commodity. The MRS goes on diminishing as consumer goes on substituting X for Y.

These are the three assumptions about the shape of an indifference curve.

As a consumer has a limited income, he spends it in such a manner so as to obtain maximum level of satisfaction. He will attain equilibrium when he gets maximum satisfaction from his expenditure on different goods. Under the utility analysis explained earlier, a consumer gets maximum satisfaction when marginal utilities from his different purchases are equal. We can also explain the equilibrium of the consumer with the help of the indifference curve analysis. For our analysis, we have to make the following assumptions.

1.        The consumer has before him an indifference map for a pair of goods say, tea and biscuits. This map represents the preferences of the consumer for the two goods. It is assumed that his scales of preferences remain constant at a given time.

2.        The consumer has a fixed amount of money to spend on the two goods. It is assumed that he will spend the amount on both the goods and not save any part of it.

3.        The prices of these goods are given in the market and are assumed to be constant.

4.        The consumer is assumed to act rationally and maximise his satisfaction.

To understand the extent of purchase of the goods with the given prices and income of the consumer, budget line is important.

Budget line of the consumer

Suppose that the consumer has Rs.20 to spend on tea and biscuits, which cost 50 paise and 40 paise respectively. The consumer has three alternative possibilities before him.

Figure  shows the above three possibilities. The line LM represents maximum amount of biscuits (50) and to tea (40 cups), which the consumer can buy with his income of Rs.20. The line LM shows that the consumer cannot choose any combination beyond this line because his income does not permit him. Nor would he like to choose a combination below this line; say, B, as it will not represent the maximum satisfaction.

The fundamental condition of equilibrium is that the marginal rate of substitution of commodity X for commodity Y should be equal to the ratio of prices between the two goods. Therefore, the condition for equilibrium is MRSxy = Px / Py