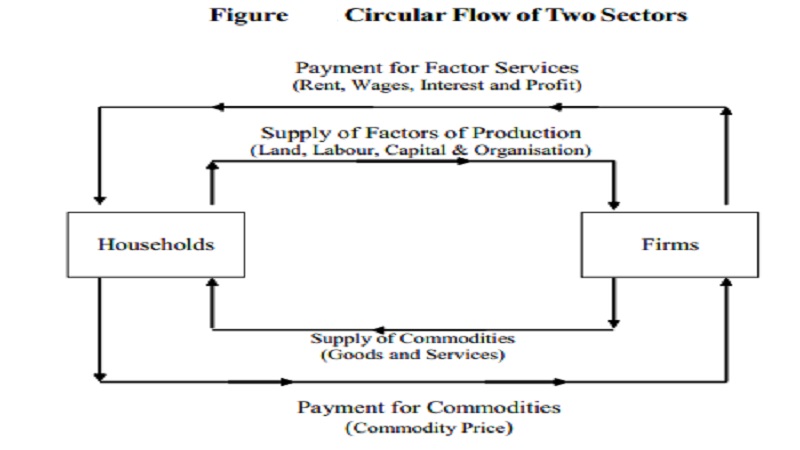 Need for the Study of National Income

1.     To measure the size of the economy and level of country's economic performance.

2.     To trace the trend or speed of the economic growth in relation to previous year(s) as well as to other countries.

3.     To know the structure and composition of the national income in terms of various sectors and the periodical variations in them.

4.     To make projection about the future development trend of the economy.

6.     To fix various development targets for different sectors of the economy on the basis of the earlier performance.

7.     To help business firms in forecasting future demand for their products.

Before discussing the calculation of national income, a brief introduction of the circular flow of income would be helpful. The circular flow of income is explained with a simplest model consisting business (firms or producers) and public (households or consumers). The public own the productive resources (i.e. factors of production namely land, labour and capital). Business sector or producers employ the factors of production to produce the goods and services. Such goods and services are bought by the public.

Thus public own the factors of production and provide them to producers. The producers employ the factor inputs to produceoutput of goods and services, which is bought by the consumers (public). For the employment of factor services, the public receive the factor income namely rent (for land), wages (for labour) and interest (for capital). This income flows back from the public to the business sector as consumption expenditure to buy the goods and services.

Thus, the flow chart consist two segments - real flow and money flow. As the outer flow in Figure  shows the flow of input (factors viz. land, labour, capital and organisation) and output (goods and services), they represent the real economy (or real flow). The inner flow shows the money received as factor income (rent, wage, interest, and profit) and it goes to the producer as consumptionexpenditure (commodity price) to buy the goods and services. As this flow chart involves only income received and expenditure made in terms of money, it represents the money economy (or money flow).

The most important point to be noted for the computation of national income is that income (Y) received is equal to the consumption expenditure (C) made by the consumers, i.e. Y=C.

Thus national income is the aggregate summation of income or expenditure made through these four components, consumers (C ), investors (I), government (G) and foreign trade (Exports [X] - Imports [M] )