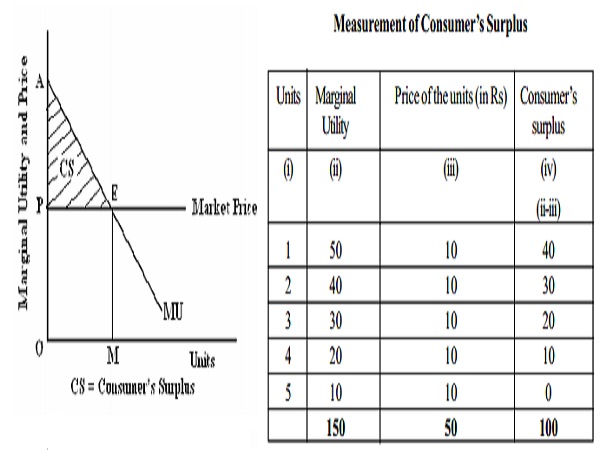 The concept of consumer's surplus was first mentioned by J.A.Dupuit, a French engineer - economist in 1844. Marshall developed the concept in his work 'Principles of Economics' (1890).

Consumer's surplus is experienced in commodities which are highly useful but relatively cheap. For example, newspaper, salt, match box, postage stamp etc. For these commodities, we are ready to pay more than what we actually pay, if the alternative is to go without them. The extra satisfaction a consumer derives is called consumer's surplus.

Suppose a consumer wants to buys a shirt. He is willing to pay Rs 250 for it. But the actual price is only Rs 200. Thus he enjoys a surplus of Rs 50. This is called consumer's surplus.

1.        Cardinal utility, that is, utility of a commodity is measured in money terms.

6.        Demand for a commodity depends on its price alone; it excludes other determinants of demand.

Consumer's Surplus for a single commodity is measured as follows: 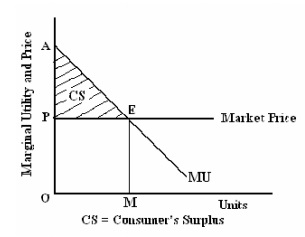 MU is the marginal utility curve. OP is the price and OM is the quantity purchased. For OM units, the consumer is willing to pay OAEM. The actual amount he pays is OPEM. Thus consumer's surplus is OAEM - OPEM = PAE (the shaded area).

Two major criticisms against the Marshallian concept of Consumer's Surplus are

2.        The Marshallian assumption of marginal utility of money remaining constant is unrealistic.

This contribution of the great economist Marshall, has perhaps provoked the most caustic of criticisms from various economists.

1.        Marshall assumed that there's no interpersonal differences. But it will change with regard to tastes, preferences, status etc.

Consumer's Surplus is useful to the Finance Minister in formulating taxation policies. It is also helpful in fixing a higher price by a monopolist in the market, based on the extent of consumer's surplus enjoyed by consumers.

Consumer's Surplus enables comparison of the standard of living of people of different regions or countries. This comparison helps to distinguish consumption levels between the people, who are living in rich countries and poor countries. For example, a middleclass person in New York enjoys more consumers' surplus than a similar person in Chennai. Alfred Marshall has stated that a middle class person in a modern city enjoys more consumer's surplus than a king of the Medieval Ages.