Transistor consists of two junctions formed by sandwiching either p type or n type semiconductor between a pair of opposite types.

A bipolar junction transistor is a three terminal semiconductor device in which the operation depends on the interaction of both majority and minority carriers and hence the name bipolar.

h11 = hie - The input impedance of the transistor (corresponding to the emitter resistance re).Unit ohms Ώ.

h22=hoe  -  The  output  impedance  of  transistor.  This  term  is  usually  specified  as admittance and has to be inverted to convert it to impedance. Units’ siemans S.

4.       Why is the transistor called a current controlled device?

5.       Explain about the characteristics of a transistor?

One of a set of four transistor equivalent-circuit parameters that conveniently specify transistor performance for small voltages and currents in a particular circuit. Also known as hybrid parameter.

Any linear circuit can be analyzed by four parameters (input resistance, reverse voltage gain, forward current gain and output admittance) of mixed dimensions. Since the dimensions of the parameters have mixed units they are referred as h-parameters. The h-parameters are determined by both open circuit and short circuit terminations.

The Q point or quiescent point or operating point where DC load line intersects proper base current curve. The coordinates of Q point decides the zero values of IC and VCE in a common emitter transistor.

10.     What do you understand by thermal runaway?

The excess heat produced at the collector base junction may even burn and destroy the transistor. The self destruction of an unbiased transistor is known as thermal runaway. To avoid thermal run away the operating point of the circuit is to be stabilized.

11.     Define the delay time and rise time in the switching characteristics of transistor?

In the transistor switching characteristics the delay time is the time that elapses the application of the input pulse and current to rise to 10 percent of its maximum value. The time required for IC to reach 90% of its maximum level from 10% level is called the rise time.

12. Differentiate FET and BJT (any two)?

13.     When a transistor is used as a switch, in which region of output characteristics it is operated?

When a transistor is used as a switch it is operated alternately in the cut off region and saturation region of the output characteristics.

14. When does a transistor act as a switch?

A transistor should be operated in saturation and cut off regions to use it as a switch. While operating in saturation region, transistor carry heavy current hence considered as ON state. In cut-off, it carries no current and it is equivalent to open switch.

15. Why do the output characteristics of a CB transistor have a slight upward slope?

The time required for IC to reach 90% of its maximum level from 10% level is called rise time, tr

The current gain (β) of common emitter configuration is defined as the ratio of change in collector current to change in base current when collector emitter voltage is kept constant.

β is also referred as hfe.

19. What is meant by biasing a transistor?

20.     What are the various methods used for transistor biasing? Which one is popular?

Voltage divider bias is wide popular because it offers excellent stabilization to the circuit.

Obtaining the exact value of h-parameters for a particular transistor is quite difficult. Highly suitable only for small ac signals.

22. What is the basic difference between bias compensation and stabilization?

Stabilization is the process of making operating point independent of temperature variations or changes in transistor parameters using dc biasing circuits. In the case of compensation technique, in order to stabilize the Q point, we use temperature sensitive devices like diodes, thermistors, transistors instead of DC biasing circuits. 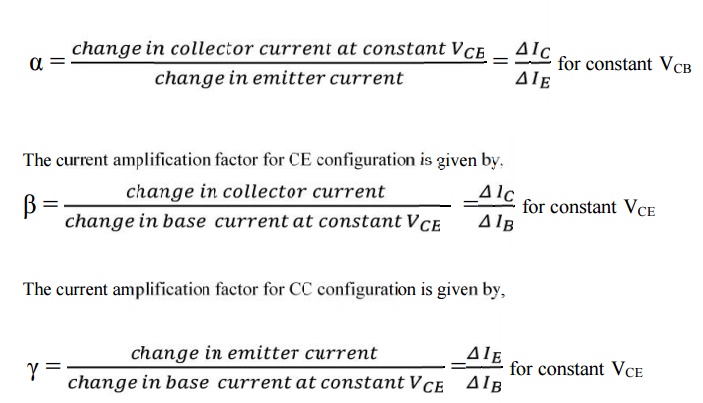 Extremely large collector voltage, the effective base width may be reduced to zero, resulting in voltage breakdown of a transistor. This phenomenon is known as punch through.

Pinch off voltage is defined as the drain to source voltage above which drain current becomes almost constant.

27.     A)What happens to transistor when both the junctions are reverse biased?

B) Can transistor circuit be operated as a switch? State how?

A)      The transistor operated in cut-off region and act as a open switch.

B)      A Transistor can be operated as a closed or ON Switch, when both the junctions are forward bias and open or OFF switch when both junction are reverse biased.