3 Pinch off voltage and its significance

Flow of current through the conducting region controlled by an electric field. Hence the name field effect transistor (FET).

FET is said to be a uni-polar device because current conduction is only by majority carriers.

FET is Voltage controlled device because its output characteristics are determined by field which depends on the voltage applied.

It has three terminals named as

FET is classified into two types as follows

1.2Advantages of JFET over BJT

2.     Operation depends upon the flow of majority carriers only

3.     It exhibits a high input resistance (mega ohm) because gate constitute no current but in BJT, base constitute a current.

Therefore it is termed as “ voltage controlled device”. 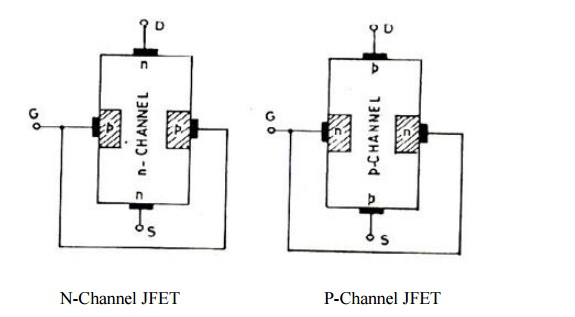 ·        Ohmic contacts made at the two ends of base called source and drain.

·        Electrons enter the base through this terminal for N-channel JFET.

·        Electrons leave the base through this terminal for N-channel JFET.

·        Heavily doped P-type silicon is diffused on both sides of the N-channel base by which PN junction are formed.

·        These layers are joined together and called gate.

·        It is the space between the gate through which majority carriers pass. 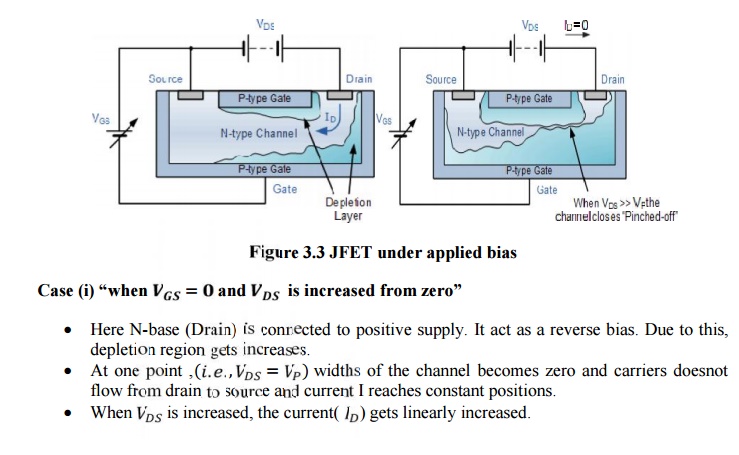 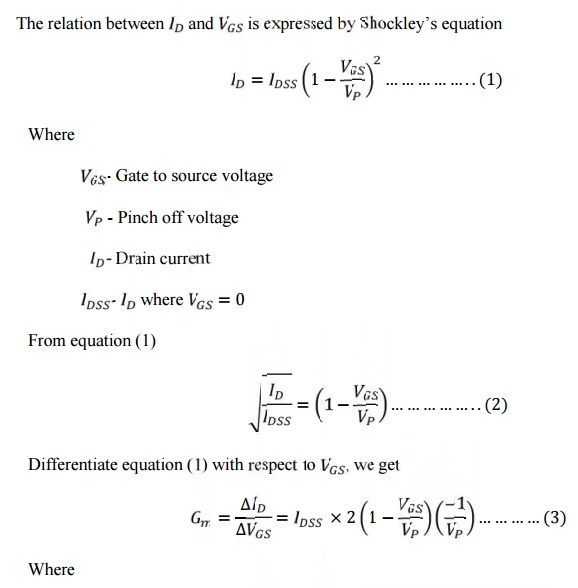 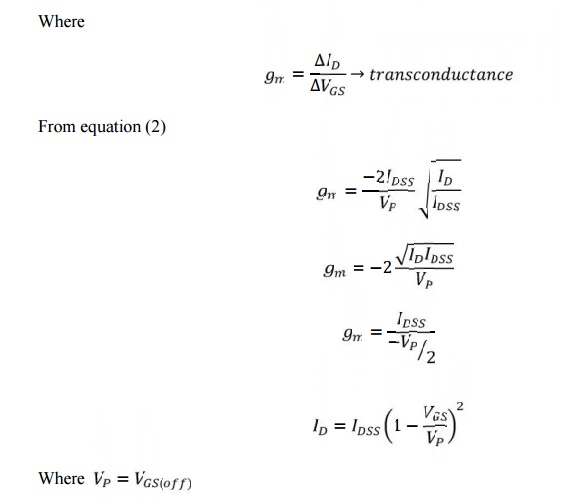 3)    Used in mixer circuits in FM and TV receivers

It has two types

The enhancement-type MOSFET is usually referred to as an E-MOSF ET, and the depletion type, a D-MOSFET. The drain current in a MOSFET is controlled by the ga te-source voltage VGS.

In depletion mode of o peration the bias voltage on the gate reduc e the number of charge carriers in the channel and therefore reduce the drain current ID.It op erates in both depletion mode and enhancement mode. 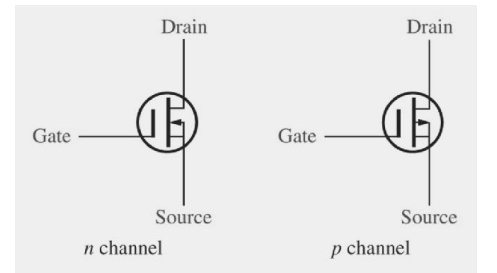 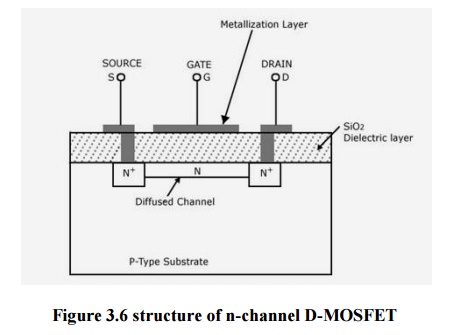 ·        It consists of lightly doped p-type substrate in which two highly doped n-regions are diffused.

·        The source and drain terminals are connected through metallic contacts to n-doped regions linked by an n-channel. The gate is also connected to a m etal contact surface but remains insulated from the n-channel by a very thin silicon dioxide (SiO2) layer. SiO2 is

a particular type of insulator referred to as a dielectric that sets up opposing (as revealed by the prefix di-) ele ctric fields within the dielectric when exp osed to an externally applied field.

·        Then the thin layer of metal aluminium is formed over the Sio2 layer. This metal overs the entire channel region a nd it forms the gate(G). 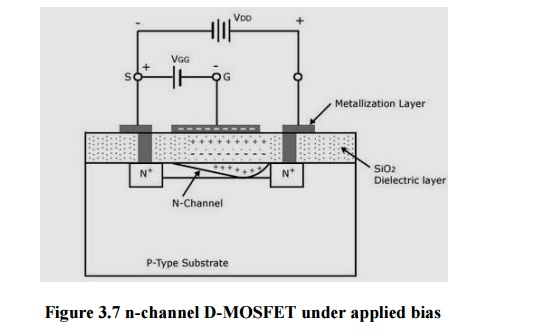 Case (i) “when and is increased from zero”

·        Here N-base (Drain) is connected to positive supply. It act as a reverse bias. Due to this, depletion region gets increases.

·        Free electron from n-channel are attracted towards positive potential of drain terminal. This establishes curren t through channel flows from drain to source and denoted as IDSS.

The pinch off voltage is th e voltage at which the junction is depleted of charge carriers.

Case (ii) “when and is increased from zero”

·        The negative charge on gate repels conduction electrons from the c hannel and attract holes from the p-type substra te.

·        Due to this electron-ho le recombination occurs and reduce the num ber of free electrons in the channel available f or conduction, reducing Drain current (ID).

further increased the channel is fully depleted and no current flows through it.

·        The negative voltage on the gate deplete the channel, the device is referred to as a depletion MOSFET.

Case (iii) “when and is increased from zero”

·   Due to positive ,ad ditional electrons are induced in the channel. Hence the conductivity

of the channel increase s and current (ID) increases.

·        This mode of operation is called as a enhancement mode and it is also called as dual mode MOSFET or ON-MOS FET.

D-MOSFET’s are biased to operate in two modes :depletion or enhancement mode. 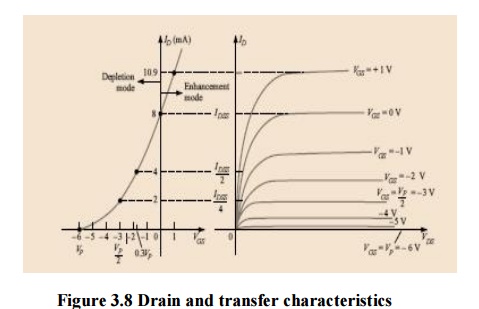 It operates only in the enhancement mode and has no depletion mo de of operation.It has no physical channel. 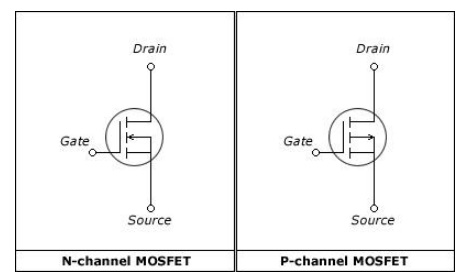 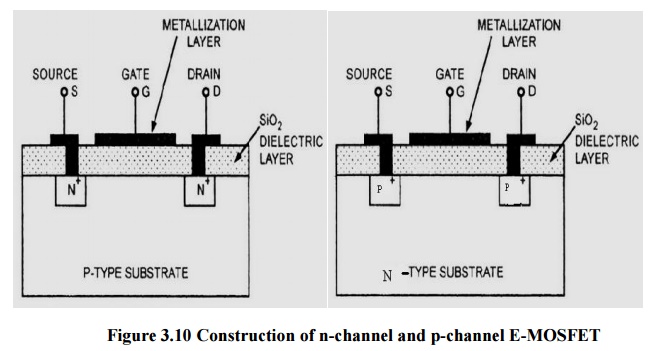 In the basic construction of the n-channel enhancement-type MOSFET, a slab of p-type material is formed from a si licon base and is again referred to as the substrate. As with the depletion-type MOSFET, the substrate is sometimes internally connected to the source terminal, while in other cases a fourth lead is made available for external control of its potential level.

The SiO2 layer is s till present to isolate the gate metallic platform from the region between the drain and sour ce, but now it is simply separated from a section of the p-type material.

In summary, therefor e, the construction of an enhancement-type MOSFET is quite similar to that of the depletion-type MOSFET, except for the absence of a channel between the drain and source terminals. 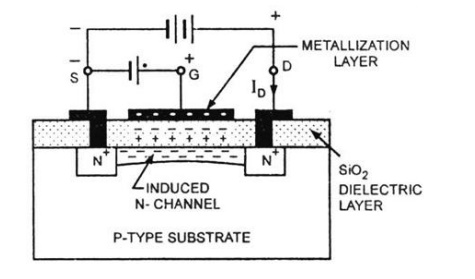 ·   If VGS is set at 0 V and a voltage applied between the drain an d source of the device, the absence of an n-c hannel (with its generous number of free carriers) will result in a current of effectively z ero amperes—quite different from the depletion- type MOSFET and JFET where ID - IDSS .

·        It is not sufficient to have a large accumulation of carriers (electrons) at the drain and source (due to the n-doped regions) if a path fails to exist between the two. WithVDS some positive voltage, VGS a t 0 V, and terminal SS directly connected to the source, there are in fact two reverse-biased p-n junctions between the n-doped regions and the p-substrate to oppose any significant flow between drain and source.

·        When both VDS and VGS have been set at some positive voltage greater than 0 V, establishing the drain and gate at a positive potent ial with resp ect to the source. The positive potential at the gate will pressure the holes (since like c harges repel) in the p-substrate along the edge of the SiO2 layer to leave the area and enter deeper regions of the p-substrate.

·        As VGS is increased beyond the threshold level, the density of free carriers in the induced channel will increase, resulting in an increased level of drain curre nt. However, if we hold VGS constant and incr ease the level of VDS, the drain current will eventually reach a saturation level as occ urred for the JFET and depletion-type MO SFET.

·        The conductivity of th e channel is enhanced by the positive bias  voltage on the gate, the

device is known as en hancement MOSFET. E-MOSFET’s are normally called as “OFF – 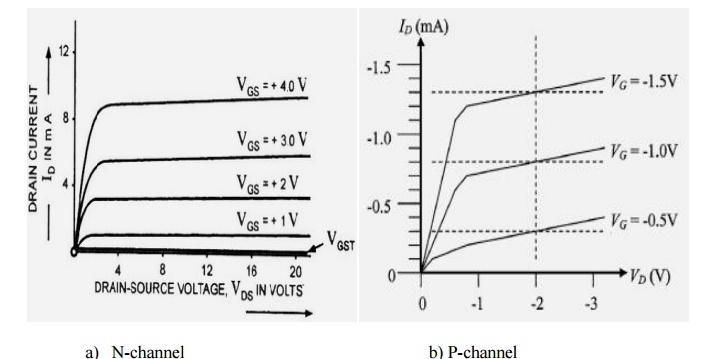 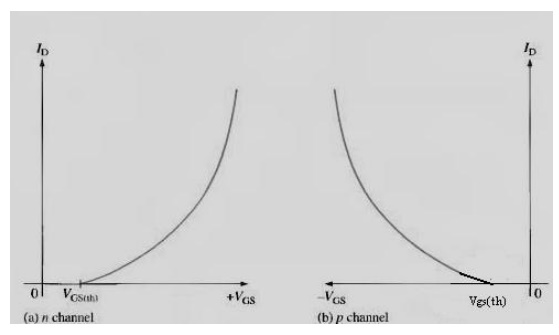 For levels of VGS > VT, the drain current is related to the applied gate-to-source voltage by the following nonlinear relationship:

Where, k-constant depends upon type of MOSFET.

Again, it is the squared term that results in the nonlinear (curved) relationship between ID and VGS. The k term is a constant that is a function of the construction of the device. The value of k can be determined from the following equation where ID(on) and VGS(on) are the values for each at a particular point on the characteristics of the device.

4.     Used as oscillator and in communication.

To understand the effect, first the notion of pinch-off of the channel is introduced. The channel is formed by attraction of carriers to the gate, and the current drawn through the channel is nearly a constant independent of drain voltage in saturation mode. However, near the drain, the gate and drain jointly determine the electric field pattern. Instead of flowing in a channel, beyond the pinch-off point the carriers flow in a subsurface pattern made possible because the drain and the gate both control the current. In the figure at the right, the channel is indicated by a dashed line and becomes weaker as the drain is approached, leaving a gap of uninverted silicon between the end of the formed inversion layer and the drain (the pinch-off region).

As the drain voltage increases, its control over the current extends further toward the source, so the uninverted region expands toward the source, shortening the length of the channel region, the effect called channel-length modulation. Because resistance is proportional to length, shortening the channel decreases its resistance, causing an increase in current with increase in drain bias for a MOSFET operating in saturation. The effect is more pronounced the shorter the source-to-drain separation, the deeper the drain junction, and the thicker the oxide insulator.

In bipolar devices a similar increase in current is seen with increased collector voltage due to base-narrowing, known as the early effect. The similarity in effect upon the current has led to use of the term "Early effect" for MOSFETs as well, as an alternative name for "channel-length modulation". 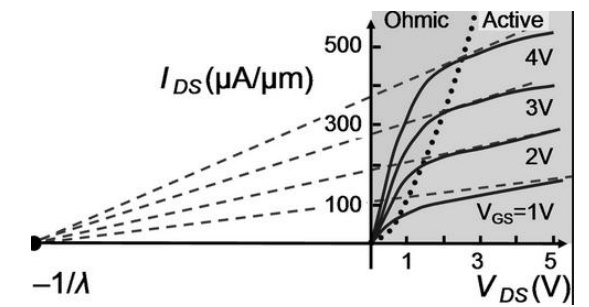 Figure 3.14 Effec t of channel length modulation due to the non-zero slope in saturation region, resulting in a finite output resistance

The output resistance is an important factor in the analysis of small s ignal equivalent circuit of MOSFET.

The threshold voltage, commonly abbreviated as Vth or VGS (th), of a field-effect transistor (FET) is the minimum gate-to-source v oltage differential that is needed to create a conducting path between the source and drain terminals.

At gate-to-source voltages abo ve the threshold voltage (VGS > Vth) but stil l below saturation (less than "fully on", (VGS - Vth) > VDS), the transistor is in its 'linear region', also known as ohmic

mode, where it behaves like a voltage-controlled variable resistor.

In n-channel enhancement-mode devices, a conductive channel does not e xist naturally within the transistor, and a positive gate -to-source voltage is necessary to create one. The positive voltage attracts free-floating electrons within the body towards the gate, forming a conductive channel. But first, enough electrons must be attracted near the gate to counter the dopant ions added to the body of the FET; this forms a region with no mobile carriers called a depletion re gion, and the voltage at which this occurs is the threshold voltage of the FET. Further gate-to-source voltage increase will attract even more electrons to wards the gate which are able to create a c onductive channel from source to drain; this process is called inversion.

In contrast, n-channel depletion-mode devices have a conductive channel n aturally existing within the transistor. Accordingly, the term 'threshold voltage' does not readily ap ply to turn such devices 'on', but is used instead to denote the voltage level at which the channel is wide enough to allow electrons to flow easily. This ease-of-flow threshold also applies to p-c hannel depletion-mode devices, in which a positive v oltage from gate to body/source creates a depletion layer by forcing the positively charged holes away from the gate-insulator/semiconductor interface, leaving exposed a carrier-free region o f immobile, negatively charged acceptor ions.

MOSFET can be provided with two gates. Both gates can be used indep endently to control the drain current or the channel ressistance. Dual gate MOSFET are normally of the n-channel depletion type. The dual-gate MOSFET has a tetrode configuration, where both gate s control the current in the device. 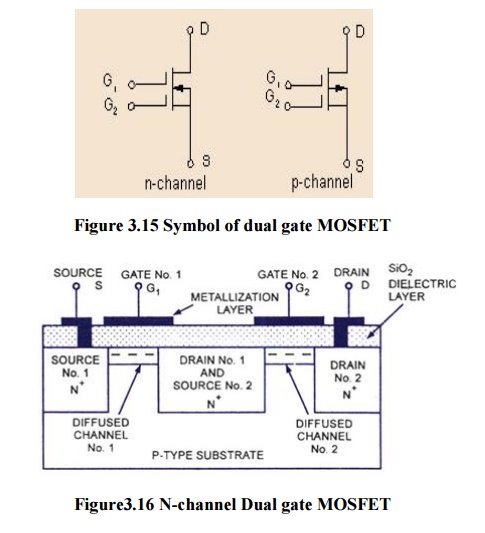 The output signal of the dual gate MOSFET is approximately proportional to the PRODUCT of the input voltages:

·        This makes this device suitable for applications where the multiplication of signals is required.E.g. modulatio n, mixing, demodulation, automatic gain con trol etc.

·   One gate serves as in put for the signal to be amplified or transf erred, the other as the control input. The advantage is, that the signal and the control voltag e are fully separated. 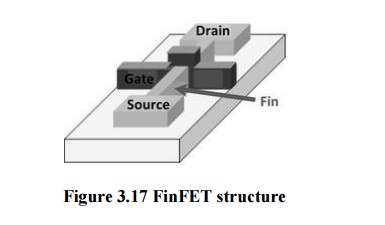 The distinguishing characteristic of the FinFET is that the conducting ch annel is wrapped by a thin silicon "fin", which forms the body of the device. The thickness of t he fin (measured in the direction from source to drain ) determines the effective channel length of the device.

The "Omega FinFET" design is named after the similarity between the Greek letter omega (Ω) and the shape in which the gate wra ps around the source/drain structure. It has a gate delay of just 0.39 picosecond (ps) for the N-type transistor and 0.88 ps for the P-type. Fin FET can also have two electrically independent gates, which gives circuit designers more flex ibility to design with efficient, low-power gates.