The various types of tuned amplifiers are

3.    Why tuned amplifier cannot be used at low frequency?

For low frequencies the size L and C are large. So the circuit will be bulky and expensive, hence the tuned amplifiers cannot be used at low frequency.

4.    What is the other name for tuned amplifier?

ii)          They are used in wireless communication systems.

iii)        They are suited for radio transmitters and receivers.

A amplifier circuit that uses  a single parallel tuned circuit as a load is called single tuned amplifier.

The amplifiers having two parallel resonant circuit in its load are called double tuned amplifiers.

9.    What are the different coil losses?

10. What are the differences between single tuned and synchronously tuned amplifiers?

11. What is Stagger tuned amplifier

12. What are the different types of neutralization?

In order to prevent oscillations in tuned RF amplifiers it was necessary to reduce the stage gain to a level that ensured circuit stability. This can be accomplished in several ways such as lowering the Q of the tuned circuits, stagger tuning ,loose coupling between the stages. Instead of losingthe circuit performance to achieve stability, a circuitin which the troublesome effect of the collector to base capacitance of the transistor was neutralised by introducing a signal which cancels the signal coupled through the collector to base capacitance. 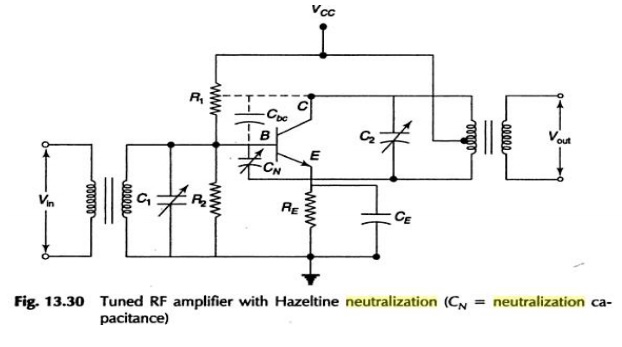 It is defined as the ratio of stored energy to dissipated energy in a reactor or resonator. For an inductor or capacitor

15. What is the effect of cascading n stages of identical single tuned amplifiers (synchronously tuned) on the overall 3db bandwidth?

From the above equation it is clear that the overall 3dB bandwidth reduces.

16. Mention the bandwidth of a double tuned amplifier

Q is the Quality factor of the coil alone

b- is a constant

17. Where is the Q-point placed in a class C type amplifier? What are its applications?

In a class C type amplifier the Q-point is placed below the X-axis.

18. Brief the relation between bandwidth and Q-factor.

Where fr= centre frequency of a resonator

21. What is the need for neutralization circuits?

In tuned RF amplifiers, the inter-junction capacitance Cbc of the transistor becomes dominant (i.e) its reactance is low, it provides the feedback signal from collector to base. If some feedback signal manages to reach the input from output in a positive manner with proper phase shift, then amplifier keeps oscillating, thus stability of amplifier gets affected. Hence neutralization is employed.

22. Draw a class C tuned amplifier circuit and what is its efficiency.

23. Derive the resonance frequency for the tank circuit shown:

25.      A tuned amplifier has its maximum gain at a frequency of 2 MHz and has a bandwidth of 50 KHz.calculate the Q-factor.

27.      A parallel resonant circuit has an inductance of 150µH and a capacitance of 100pF. Find the resonant frequency.