Origin and Evolution of Life (Science)

I.  Choose the correct answer

a) Ontogeny and phylogeny go together

d) There is no relationship between phylogeny and ontogeny

4. The best way of direct dating fossils of recent origin is by

5. The term Ethnobotany was coined by

II.  Fill in the blanks

1. The characters developed by the animals during their life time, in response to the environmental changes are called adaptation.

2. The degenerated and non-functional organs found in an organism are called vestigial organs.

3. The forelimbs of bat and human are examples of homologous organs.

4. The theory of natural selection for evolution was proposed by Charles Darwin.

1. The use and disuse theory of organs’ was postulated by Charles Darwin. - False

The Use and Disuse theory of organs was postulated by Lamarck.

2. The homologous organs look similar and perform similar functions but they have different origin and developmental pattern. - False

The homologous organs look dissimilar and perform different functions but they have similar origin and developmental pattern.

3. Birds have evolved from reptiles. - True

Column A Column B

Column A : Column B

(a) Atavism : rudimentary tail and thick hair on the body

(d) Homologous organs : a forelimb of a cat and a bat’s wing

V. Answer in a word or sentence

1. A human hand, a front leg of a cat, a front flipper of a whale and a bat’s wing look dissimilar and adapted for different functions. What is the name given to these organs?

2. Which organism is considered to be the fossil bird?

3. What is the study of fossils called?

(i) When there is a change in the environment, the animals respond to the change.

(ii) They develop adaptive structures. The characters developed by the animals during their life time, in response to the environmental changes are called acquired characters.

(iii) Lamarck’s use and disuse theory states that if an organ is used constantly, the organ develops well and gets strengthened. When an organ is not used for a long time, it gradually degenerates.

Degenerated wing of kiwi is an example for organ of disuse

Degeneration of wings in kiwi is due to disuse of wings over generations since they have learns to walk on land for all their needs. This is an acquired character in response to their habitat. According to Lamarck such characters are passed to the off springs by inheritance.

2. Why is Archaeopteryx considered to be a connecting link?

(i) Archaeopteryx is the oldest known fossil bird.

(ii) It is considered to be a connecting link between reptiles and birds. It had wings with feathers, like a bird. It had long tail, clawed digits and conical teeth, like a reptile.

3. Define Ethnobotany and write its importance.

(ii) The term Ethnobotany was coined by J. W. Harshberger in 1895 to include the study of plants used by the primitive and aboriginal people.

(i) It provides traditional uses of plant.

(iii) The ethnomedicinal data will serve as a useful source of information for the chemists, pharmacologists and practitioners of herbal medicine.

4. How can you determine the age of the fossils?

(i) The age of fossils is determined by radioactive elements present in it.

(ii) They may be carbon, uranium, lead or potassium. It is used in paleobotany and anthropology for determining the age of human fossils and manuscripts.

(ii) Carbon consumption of animals and plants stops after death and since then, only the decaying process of C14 occurs continuously.

(iii) The time passed since death of a plant or animal can be calculated by measuring the amount of C14 present in their body.

1. Natural selection is a driving force for evolution-How?

Evolution is the gradual change occurring in living organisms over a period of time. Formation of new species due to changes in specific characters over several generations as response to natural selection, is called evolution. Principles of Darwinism - Theory of Natural selection proposed by Charles Darwin :

(i) Living beings have the ability to reproduce more individuals and form their own progeny. (Multiply in Geometrical manner.)

(ii) This will increase reproductive potential leading to over production.

Struggle for existence: Due to over production, a geometric ratio of increase in population occurs. This creates an intense competition among the organisms for food and space leading to struggle.

The struggle for existence are of three types:

(i) Intraspecific struggle: Competition among the individuals of same species.

(ii) Interspecific struggle: Competition between the organisms of different species living together.

(iii) Environmental struggle: Natural conditions like extreme heat or cold, drought and floods can affect the existence of organisms.

(i) The occurrence of variation is a characteristic feature of all plants and animals. Small variations are important for evolution.

Survival of the fittest or Natural selection:

(ii) The process of selection of organisms with favourable variation is called as natural selection.

(i) According to Darwin, new species originates by the gradual accumulation of favourable variations for a number of generations.

Hence natural selection is a driving force for evolution since it leads to formation of new species.

(i) The homologous organs are those which have inherited from common ancestors with similar developmental pattern in embryos.

E.g: A human hand, a front leg of a cat, flipper of a whale and a bat’s wing look dissimilar and adapted for different functions.

(ii) Their mode of development and basic structure of bone are similar.

The analogous organs look similar and perform similar functions but they have different origin and developmental pattern.

3. How does fossilization occur in plants?

The process of formation of fossil in the rocks is called fossilization.

(1) Minerals like silica slowly penetrate in and replace the original organic tissue and forms a rock like fossil.

(2) This method of fossilization can preserve hard and soft parts. Most bones and wood fossils are petrified.

(1) A replica of a plant or animal is preserved in sedimentary rocks.

(2) When the organism gets buried in sediment it is dissolved by underground water leaving a hollow depression called a mold.

(3) It shows the original shape but does not reveal the internal structure.

(4) Minerals or sediment fill the hollow depression and forms a cast.

(1) Original remains can be preserved in ice or amber (tree sap).

(2) They protect the organisms from decay. The entire plant or animal is preserved.

(1) When an organism dies, the hard parts of their bodies settle at the bottom of the sea bed and are covered by sediment.

(2) The process of sedimentation goes on continuously and fossils are formed.

(1) The precipitation of minerals takes place which later on infiltrate the cell wall.

(2) The process is brought about by several mineral elements such as silica, calcium carbonate and magnesium carbonate.

(3) Hard parts are dissolved and replaced by these minerals.

1. Arun was playing in the garden. Suddenly he saw a dragon fly sitting on a plant. He observed the wings of it. He thought it looked similar to a wing of a crow. Is he correct? Give reason for your answer.

(i) No. Wings of a dragon fly are different from the wings of crow. In the case of a crow, wings represent modified forelimbs.

2. Imprints of fossils tell us about evolution-How?

(i) Fossils are evidence for evolution.

(ii) Fossils are the most important proof for evolution of life on earth over millions of years. They show that life on earth was once different from life found on earth today.

(iii) By Studying fossils, help scientists to gather information about plants and animals which lived in the past ages.

(iv) A plant fossil is any preserved part of a plant that has died long back.

(v) Fossils may be a prehistoric impression that may be hundred to millions of years old.

(vi) Majority of the plant fossils are disarticulated parts of plants, it is rare to find plants to be preserved as whole.

(i) They throw light on phylogeny and evolution of plants.

(ii) Fossil plants give a historical approach to plant kingdom.

(iii) Thus even if fossils are not available as a whole, imprints or separated parts will also be able to give us lot of information about evaluation.

3. Octopus, cockroach and frog all have eyes. Can we group these animals together to establish a common evolutionary origin. Justify your answer.

(i) No. These animals cannot be grouped together. Only the presence of eyes is not a factor to group animals together.

(ii) The interrelationship of the organism must be supported by evidence from other disciplines of biology.

(iv) Based on the presence of a single character, animals cannot be grouped to establish a common evolutionary origin. 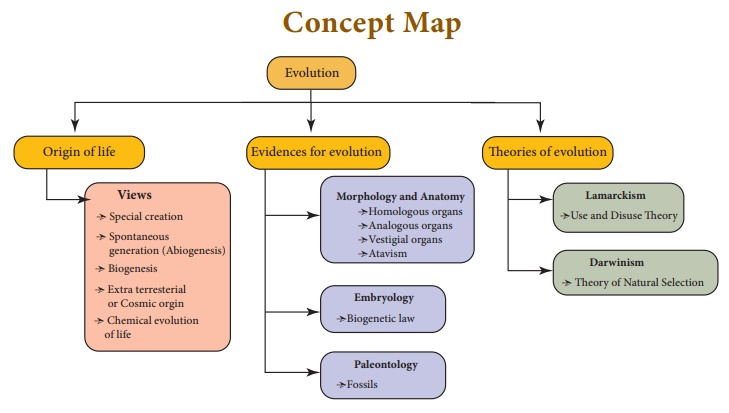 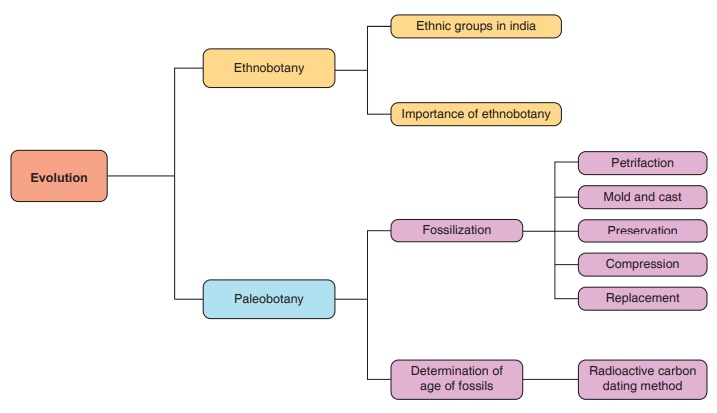