The water fed into the boiler for the production of steam is known as boiler feed water.

02. What are the requirements of boiler feed water?

It should free from

03. What are the disadvantages using hard water in boiler?

04. What are the disadvantages formation of deposits in steam boilers and heat exchangers?

When thick scales crack due to uneven expansion, the water comes suddenly in contact with over-heated iron plates. This causes in formation of a large amount of steam suddenly. So sudden high-pressure is developed, which may even cause explosion of the boiler.

06. What are the methods used to be prevention of scale formation?

07. What are the methods used to be softening hard water?

08. What is meant by internal conditioning of water? Give one example.

Treating the boiler water in the boiler itself by adding chemicals to remove scale forming substance is called internal conditioning.

09. What is meant by external conditioning of water? Give one example.

To remove hardness producing salts, chemicals were added to the boiler water in the boiler itself and that treatment is known as internal conditioning.

Treating the boiler water before feeding it into boiler is called external contioning.

11. What is meant by caustic embrittlement? How is it prevented?

Caustic embrittlement means intercrystalline cracking of boiler metal. It is prevented by using softening agent like sodium phosphate and by adding tannin and lignin.

The process of removing common salt (NaCl) from the water is known as desalination. The water contains dissolved salts with brackish taste is called brackish water.

The chemicals directly added into the boiler for removing scale forming substances is known as boiler compounds. Ex: Sodium carbonate and Sodium phosphate

14. What is Calgon? How does it function in water treatment?

It interacts with calcium ions forming a highly soluble complex and thus prevents the precipitation of scale forming salt.

15. What is Reverse osmosis?

16. What are the advantages of reverse osmosis method?

It removes all types of impurities like non-ionic and colloidal.

The life time of membrane is high and it can be replaced within few minutes.

Boiler Feed Water: The water fed into boiler for the production of steam is called boiler feed water.

It should be free from turbidity, oil, dissolved gases, alkali and hardness producing substances.

i). It should has zero hardness.

ii). It must free from dissolved gases like O2 and CO2.

If dissolved gases present in boiler feed water, it leads to boiler corrosion.

iii). It should be free from suspended impurities.

If it is present in boiler feed water, it produces wet steam.

iv). It should be free from dissolved salts and alkalinity.

If it is present in boiler feed water, it produces caustic embrittlement, which causes brittlement of boiler parts.

02. What is Zeolite? How is water softened by zeolite? Give equations. 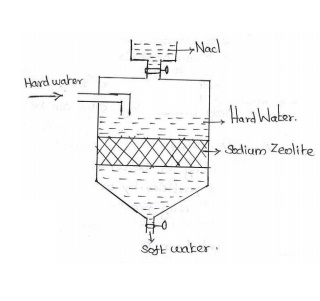 The synthetic form of zeolite is known as PERMUTIT, which is porous and possess gel structure and Ze stands for insoluble zeolite.

Principle: The sodium ions which are loosely held in Na2Ze are replaced by Ca2+ and Mg2+ ions present in water.

Process: When hard water is passed through a bed of zeolite placed in a closed cylinder, the hardness causing ions like Ca2+ and Mg2+ ions are taken up by zeolite. Sodium salts are released during the reaction as byproduct.

For softening of water by zeolite process, hard water is percolated at a specified rate through a bed of zeolite, kept in a cylinder.

The hardness causing ions like Ca2+ and Mg2+are retained by the zeolite as CaZe and MgZe. While the outgoing water contains sodium salts.

The various reactions taking place may be

After some time zeolite gets exhausted. The exhausted zeolite is again regerated by treating with 10%solution of NaCl.

(iii). No sludge is formed during the process.

03. Explain formation of deposits in steam boilers and heat exchangers.

Steamboilers:       Sealed vessel where water is converted to steam.

A steam boiler is a type of generator that is used to create steam.

Heat exchangers: A device for transferring heat from one medium to another.

Heat exchangers are designed to remove excess heat from aircraft engines, optics, x-ray tubes, lasers, power supplies, military equipment, and many other types of equipment that require cooling beyond what air-cooled heat sinks can provide.

Scale:If the precipitate forms hard and adherent coating on the inner walls of the boiler is known as scale. It is formed by the substances like CaSO4, Mg(OH)2 and Ca(HCO3)2.

Scales are difficult to remove even with the help of hammer and chisel. Scales are the main sources of boiler troubles. Formation

of scales may be due to

Sludge: In boiler, water contains the precipitate loose and slimy is known as sludge. It is formed by the substances like CaCl2, MgCl2, MgSO4 and MgCO3.

(i). Poor conductor of heat.

(ii). Excessive sludge formation disturbs the working of the boiler.

(iii). It forms along with scales, then former gets entrapped in the latter and both get deposited scales.

Prevention of sludge formation: (i). By using well softened water.

(ii). By frequently below down opearation.

04. What are the disadvantages in scale formation? Explain in detail.(Or)

What are the disadvantages formation of deposits in steam boilers and heat exchangers?(or)

Disadvantages:    (i). Wastage of fuels.

Scales may sometimes deposit in the valves and condensers of the boiler and choke then partially. This results in decrease in efficiency of the boiler.

When thick scales crack due to uneven expansion, the water comes suddenly in contact with over-heated iron plates. This causes in formation of a large amount of steam suddenly. So sudden high-pressure is developed, which may even cause explosion of the boiler.

An ion is prohibited to exhibit its original character by complexing or converting it into other more soluble salt by adding suitable reagent.

(a). To precipitate the scale forming impurities in the form of sludge, which can be remove by blow – down operation (or)

(b). To convert them into compounds, which will stay in dissolved form in water and thus do not cause any harm Blow down operation: It is partial removal of hard water through top at the bottom of boiler, when extent of hardness in the boiler becomes alarmingly high.

It is a type of boiler corrosion, caused by using highly alkaline water in the boiler.

In boiler water, it contains a small amount of sodium Carbonate. In high pressure, it decomposes to give sodium hydroxide.

Then this NaOH reacts with boiler material and it forms sodium Ferrate and this leads to brittlement of boiler parts like joints, bends etc.,

(i). By using sodium phosphate as softening reagent instead of sodium carbonate. (ii). By adding Tannin or Lignin to boiler water for blocks hair-cracks.

To remove hardness producing salts, chemicals were added to the boiler water in the boiler itself and

that treatment is called internal conditioning.

In  low-pressure  boilers,  scale  formation  can  be  avoided  by  adding  organic  substances  like kerosene ,tannin, agar-agar (a gel), etc., which get coated over the scale forming precipitates, thereby yielding non-sticky and loose deposits, which can easily be removed by pre-determined blow-down operations.

(i). It can be applied to high pressure boilers and

(ii) It can be used for softening/ conditioning acidic, neutral or alkaline water sample.

In low pressure boilers, calcium ions are converted into soft and loose sludge by adding sodium carbonate solution. It forms soft CaCO3 which can be removed by blow-down operation.

Calgon=Sodium HexaMeta phospha)6precipitation of scale forming salt. The complex Na2[Na4(PO3)6] is soluble in water and no problem for its sludge disposal.

Boiler corrosion taken place in boiler in the presenceë  of gases like dissolved oxygen,û dissolved CO2 and dissolved salts.

Dissolved oxygen: It attacks the boiler material at high temperature and causes the Corrosion. 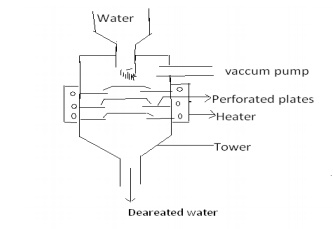 Dissolved CO2:    It produces carbonic acid, which is acidic and corrosive in nature

It can be removed by adding calculated amount of NH4OH into water and also removed by de-aeration method.

Dissolved salts(MgCl2): Salts like CaCl2 and MgCl2 undergoes hydrolysis at higher temperature , to give HCl , which corrodes the boiler

It can be avoided by adding alkali into the boiler water.

10. Explain priming and foaming (carry over).

1.Priming:  It is the process of production of wet steam.

It is caused by

Prevention:  It is controlled by

Controlling the velocity of steam

These bubbles are carried over by steam leading to excessive priming. It is caused by

Presence of oil and grease

Presence of finely divided particles. It can be prevented by

In this RO process, Pure water is separated from salt water.

When the pressure is applied from the higher concentration side, the solvent flow takes place to lower side and these two concentrations are separated by semipermeable membrane, the salt water is converted into pure water.

The membranes used as cellulose acetate, polyamide and some polymers.

2. It is used for converting sea water into drinking water

3. It removes all types of impurities like non-ionic and colloidal

4. The life time of membrane is high and it can be replaced within few minutes.