1. What is meant by Finite element method?

Finite element method (FEM)is a numerical technique for solving boundary value problems in which a large domain is divided into smaller pieces or elements. The solution is determined by asuuming certain ploynomials. The small pieces are called finite element and the polynomials are called shape functions.

·       Any type of boundary condition can be adopted.

·The computational cost is high.

·The solution is approximate and several checks are required.

4. Mention the various coordinates in FEM.

5. What are the basic steps in FEM?

·       Discretization of the structure

6. What is meant by discretization?

Discretization is the process of subdividing the given body into a number of elements which results in a system of equivalent finite elements.

7. What are the factors governing the selection of finite elements?

·The geometry of the body

·The number of independent space coordinates

·The nature of stress variation expected

Displcement function is defined as simple functions which are assumed to approximate the displacements for each element. They may assumed in the form of poynomials, or trignometrical functions.

The various terms used in FEM are explained below.

·        Finite element-Small elements used for subdividing the given domain tobe  analysed are called finite elements. The seelements may be 1D, 2D or 3D elements depend in on the type of structure.

·        Nodes and nodal points- The intersection of the differnt sides of elements are called nodes. Nodes are of two types - external nodes and internal nodes.

O Internal nodes- The extra nodes used to increase the accuracy of solution.

·          Nodal lines - The interface between elements are called nodal lines.

·           Continuum- The domain in which matter exists at every point is called a continuum. It can be assumed as having infinite number of connected particles.

The various elements used in FEM are classified as:

Elements having a minimum of two nodes are called 1D elements. Beams are usually approximated with 1Delements. These may be straight or curved. There can be additional nodes within the element.

A plane wall, plate, diaphragm, slab, shell etc. can be approximated as an assemblage of 2-D elements. Most commonly used elements are triangular, rectangular and quadrilateral elements. 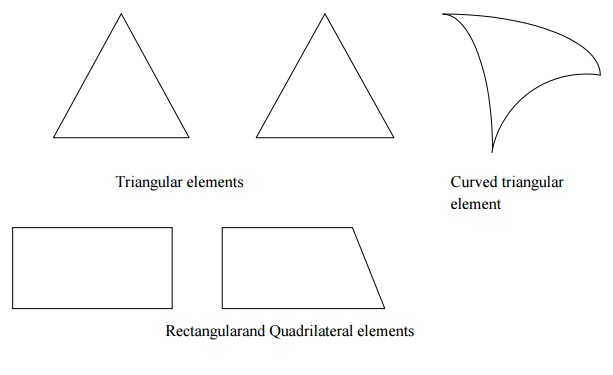 3-D elements are used for modeling solid bodies and the various 3-Delements are tetrahedron, hexa hedron, and curved rectangular solid.

The properties of shape functions are:

·       Theno of shape functions will be equal to theno of nodes present in the element.

·        Shape function will have a unit value at the node considered and zero value at other nodes.

Element aspect ratio is defined as the ratio of the largest dimension of the element to its smallest dimension.

The possible locations for nodes are:

·Point of application of concentrated load.

·Location where there is a change in intensity of loads

·Locations where there are discontinuities in the geometry of the structure

·Interfaces between materials of different properties.

Displacement functions should have the following characteristics:

The displacement field should be continuous.

·       The displacement function should be compatible between adjacent elements

·       The displacement field must represent constant strain states of elements

·        The displacement function must represent rigid body displacements of an element.

Plane strain is a state of strain in which normal strain and shear strain directed perpendicular to the plane of body is assumed to be zero.