1.       Fluid velocities are appreciable compared  with  the  velocity  of sound

3.       Compressibility factor is greater than one.

1.       Fluidvelocitiesaresmall compared  with  the  velocity  of sound

2. Write the steady flow energy equation for an adiabatic flow of air.

3. Define the mach number in terms of bulk modulus of elasticity.

Mach number is a non-dimensional number and is used for the analysis of compressible fluid flows. 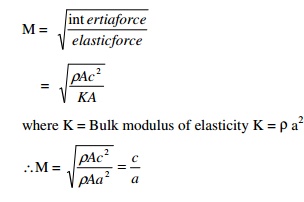 4. Explain the meaning of stagnation state with example.

The state of a fluid attained by isentropically decelerating it to zero velocity at zero elevation is referred as stagnation state.

(e.g.) Fluid in a reservoir (or) in a settling chamber.

5. Distinguish between static and stagnation pressures.

6. Differentiate between the static and stagnation temperatures. 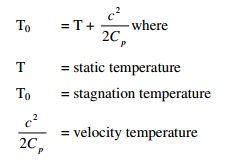 7. What is the use of mach number?

Mach number is defined as the ratio between the local fluid velocity to the velocity of  sound.

It is used for the analysis of compressible fluid flow problems. Critical mach number is a dimensionless number at which the fluid velocity is equal to its sound velocity. Therefore,

8. Write down the relationship between stagnation and static temperature interms of the flow, mach number for the case of isentropic flow.

9.Give the expression of  p/P0  for an isentropic flow through a duct. 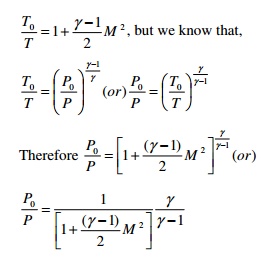 10. Name the four reference velocities that are used in expressing the fluid velocities in

The adiabatic energy equation for a perfect gas is derived in terms of fluid velocity © and sound velocity (a). This is then plotted graphically on the c- a co-ordinates, a steady flow ellipse is obtained. 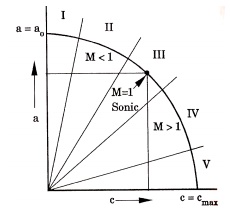 The various regions of flow are:

It is a non-dimensional mach number and is defined by the ratio between the local fluid velocity to its critical velocity of sound / fluid.

At higher altitude, the sound velocity ‘a’ will decrease and hence M will increase. Therefore, M is not constant. 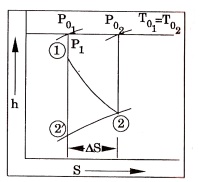 It is assumed that, the exit pressure is same for both  cases.   But  stagnation  pressure  at  the  exit of the adiabatic  process   (P02  ) will be  less than  isentropic pressure (P02  ' ) . This   is due   to friction   and irresversibilities.  But stagnation temperature remains constant.

17. How will you illustrate the role of mach number as a measure of compressibility?

If the flow is assumed to be incompressible, the value of pressure co-efficient (or) compressibility factor obtained by Bernoulli equation is unity.

18. What is meant by isentropic flow with variable area?

A steady one dimensional isentropic flow in a variable area passages is called “variable area flow”. The heat transfer is negligible and there are no other irreversibilities due to fluid friction, etc.