1. What is nuclear energy?

The energy released by the nuclear fission reaction is called nuclear energy.

2. What is nuclear fission reaction?

Simultaneous liberation of large amount of energy in the form of heat is known as nuclear fission reaction.

3. What is nuclear fusion reaction? Give one example.

The process of combination of two or more lighter nuclei into heavier nuclei, with simultaneous liberation of large amount of energy is known as nuclear fusion reaction.

It is the process of breaking the heavier

It can be controlled

It is the process of

Does not emit radioactive rays.

It is a nuclear reaction, in which neutrons from a previous step propagate and repeat the reaction. It takes place only nuclear fission reaction.

6.What are fissile and fertile nucleides?

7. What are solar cells? Give one example./What is a photo galvanic cells?

It is a device, Converting solar energy directly into electrical energy.

8. What is solar energy conversion?

It is the process of conversion of direct sunlight into more useful forms.

9. What are the merits of wind energy?

d).  It is available in many offshore, onshore and remote areas.

It is a device, converted chemical energy into electrical energy. It is an arrangement of electrochemical cells connected in series,and it can be used as a source of direct electric current.

12. What are non-conventional energy sources? Give two examples.

It is a device in which the chemical energy of the fuel hydrogen is directly converted into electrical energy without combustion.

It is used as an auxiliary energy source in space vehicles, submarines.

Used in military vehicles. It is a pollution free one.The product is water, so it is a valuable source of fresh water by the astronauts.

15. What are the applications of lithium batteries?

Its cell voltage is high, 3V. Li is a light-weight metal, only 7g (1 mole) material is required to produce 1 mole of electrons. It contains solid material so there is no leakage from battery. This battery can be made in a variety of sizes and shapes.

It is called as a dry cell.>It has the electrolyte of KOH

A zinc cylinder is filled with an electrolyte of Zn,KOH and MnO2 A carbon rod acts as a cathode and zinc body acts as a anode.

16.What are the general components in nuclear reactor? 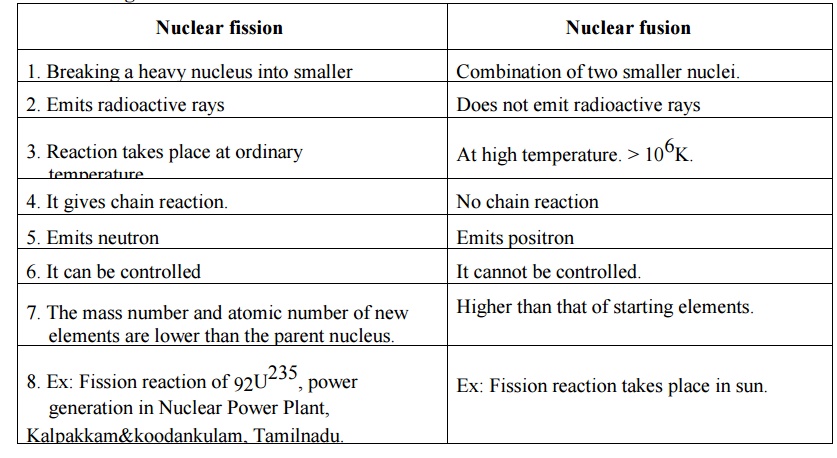 7.       The mass number and atomic number of new elements are lower than the parent nucleus.

2. Does not emit radioactive rays

6. It cannot be controlled.

7. Higher than that of starting elements.

2. Define Nuclear fission reaction. Explain with one example in detail. 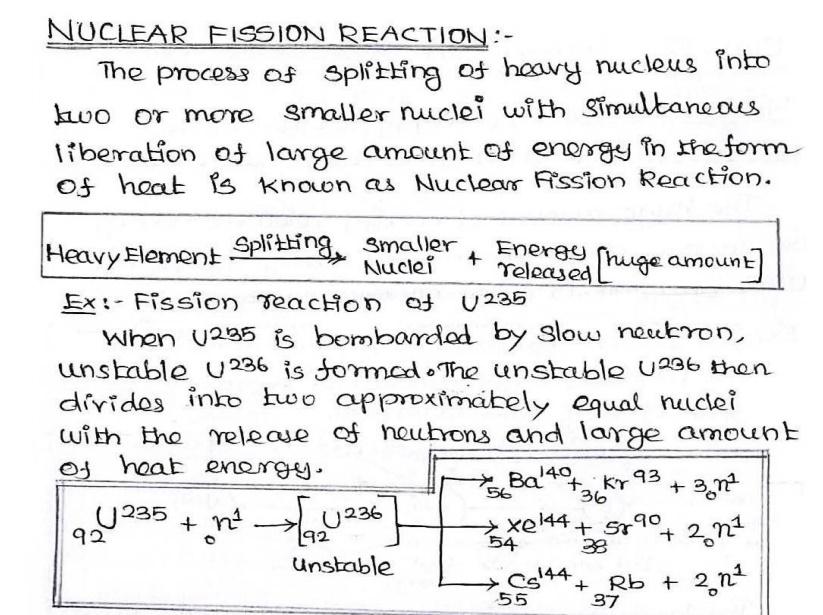 Nuclear Reactor: A device used for power generation, in which a nuclear chain reaction is initiated, maintained and controlled to produce the heat energy is known as nuclear reactor. 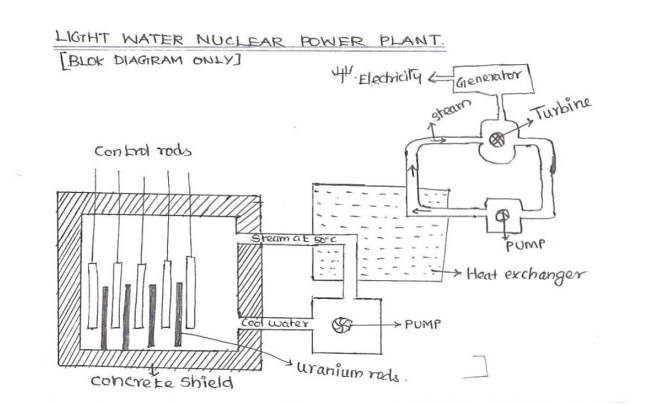 2) Control Rods:  To keep power production at a steady state.

3)      Moderators:         Function to reduce the kinetic energy of fast fission neutrons to slow

neutron and this is done in a small fraction of a second.

4)      Coolants:    To remove the intense heat produced in the reactor and to bring it out for

5)      Reflector:    It placed around the core to reflect back some of the neutrons that leak out

from the surface of the core.

6)      Pressure vessel: It enclosed the core and reflector. It also provides the entrance and exit passages for coolant. (Pressure 200 kg/cm2)

7)      Shielding:    To attentiate the Gama rays and other radiations coming out from the reactor. 2 Types. (i). Thermal shield  (ii). Biological shield.

8)      Turbine:      The steam at high pressure, generated in the heat exchanger is used to operate a steam turbine, which derives a generator to produce electricity.

Solar cell = Photogalvanic cell : It is a device used for converting solar energy into electricity. It is made by interconnecting a large number of photovoltaic cells.

Solar Energy Conversion: It is the process of conversion of direct sunlight into more useful forms. Conversion may be in two forms. 1. Thermal Conversion. 2. Photo Conversion.

It involves absorption of thermal energy in the form of IR radiation. Temperature below 100oC, is useful for heating purpose of water and refrigeration.

(i). Solar heat collectors: It consists of natural materials like stones, bricks which can absorb heat during the day time and release it slowly at night.

Uses: It is used for houses in cold condition. 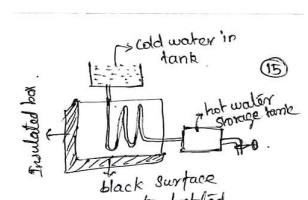 It consists of an insulated box inside of which is painted with black paint. There is a provision for sun light absorption using a glass lid and store solar heat. Inside the black painted, copper coil and cold water is flow in and gets heated and storage in a tank.

It involves conversion of light energy directly into electrical energy. 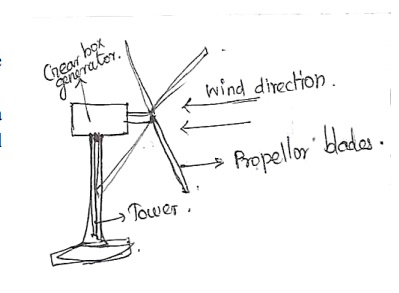 It is a device, converting solar energy directly into electrical energy.

Principle: When solar rays fall on a two layer of

Working: When the solar ray falls on the top layer and the e-s promoted to the conduction into n-type semiconductor. The potential difference occurs; it should lead current increasing (i.e) flow e-s. They are connected with an external circuit, and current is generated.

(iii). Used in boilers to produce hot water for domestic and Industrial uses.

(iv). Used for lighting purposes. (v). Used as a source power in space crafts and satellites. (vi). Used for producing hydrogen by hydrolysis of H2O.

(ii). Not available during night and cloudy days. (iii). Storage of energy is not possible

Moving energy is called Wind.Energy recovered from the force of the wind is called wind energy. The wind energy is harnessed by making use of wind mills.

The strikes of blowing wind on blades of the wind mill make it rotating continuously.

The rotational motion of the blade drives a number of machines like water pump, flour mills and electric generators.

Wind mills are capable of generating about 100 kw electricity.

It is known as the large number of joining wind mills called wind farm. It produces a large amount of electricity.The minimum speed required for working of a wind generator is 15 km/hr

i. It does not cause any Air pollution. ii. It is very cheap and economic.

Affected to the radio signals.

7. Define Battery. Explain with its types.

It is a device, converted chemical energy into electrical energy. It contains several anodes and cathodes.

It is an arrangement of several electrochemical cells connected in series and it can be used as a source of direct electric current. (D.C).

i.  It is known as Non-Reversible battery.

ii. Electrode and electrode reactions cannot be reversed by passing an external current. iii. Reactions take place only once and after use they become dead.

iv. They are not chargeable.

It is known as Reversible battery.

ii. Electrode and electrode reactions are reversiblewhen an external current is passing iii. It can be recharged again and again.

In these cells, the reactants, products and electrolytes and continuously passing through the cell. Here chemical energy is converted to electrical energy.

Electrolyte : Powdered KOH, MnO2  in the form of paste. 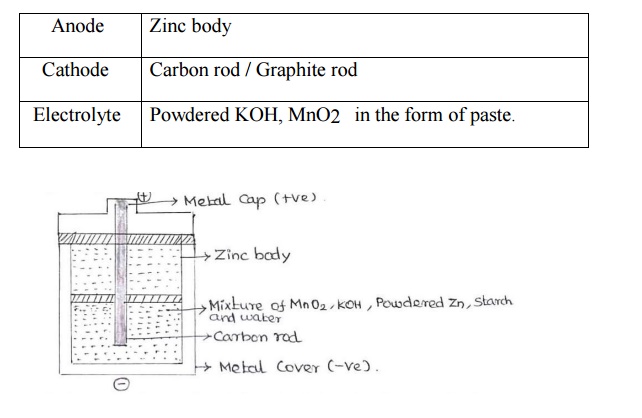 Alkaline battery consists of electrolyte KOH and a Zinc cylinder filled with powdered Zn, KOH and MnO2 in the form of paste using starch and water. A carbon rod [Graphite] acts as a cathode and it is immersed in the electrolyte in the centre of the cell. The outside cylindrical

zinc body acts as an anode.

ii. Its life is longer than dry battery because there is no corrosion on Zn. iii. It maintains its voltage, when the current is drawn from it.

It is used in calculators and watches. 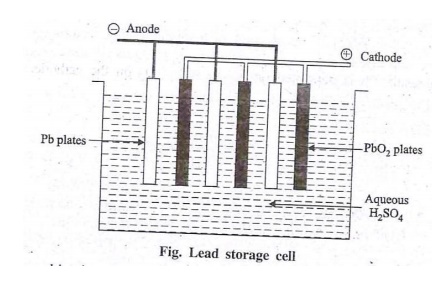 This is also a rechargeable battery.It consists of number of voltaic cells. In each cell, anode is Pb plate and cathode is PbO2

A known number of lead plates are connected with parallel and a number of PbO2 plates and also connected in parallel. Various plates are separated by insulators like glass fibre. The total anodes and cathodes are immersed in dil.H2(SO)4 Solution.

Cathode : A metal grid containing a paste of NiO2

This is also a rechargeable battery.

It consists of Cd anode and a metal grid containing a paste of NiO2 acts as a cathode. The  electrolyte is KOH.

Discharging: When Ni-Cd battery operates, Cd gets oxidation and forms Cd2+ and insoluble Cd(OH)2 is formed. Its emf value is 1.4 V.

Recharging: When an current is passed opposite direction, the cell reaction is reversed. As a result, Cd gets deposited on anode and NiO2 on cathode.

(i). It is smaller and lighter.

(ii). It has longer life than lead storage cell.

(i). It is used in calculators, Electronic devices.

It is known as solid state battery because the electrolyte is used here at solid state. 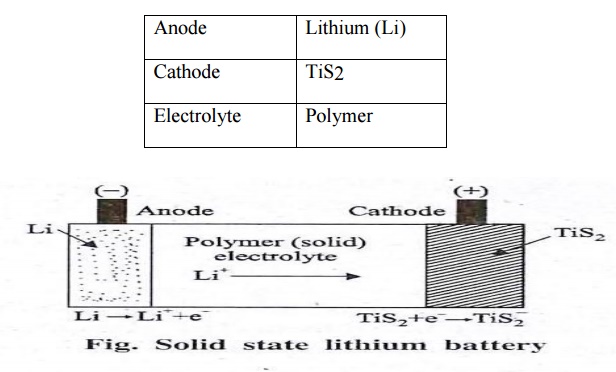 When the anode is connected to cathode, Li+ ions move from anode to cathode. Anode is Li and cathode is TiS2 and the electrolyte is solid polymer. The cathode is a material capable of receiving the Lithium ions and electrons.

It is recharged by applying an external current. Emf of Li cells = 3.0V.

(ii). It is a light weight material only 7g required for produce 1 mole of e-s.

Fuel Cell: It is a device in which the chemical energy of the fuel hydrogen is directly converted into electricity without combustion. 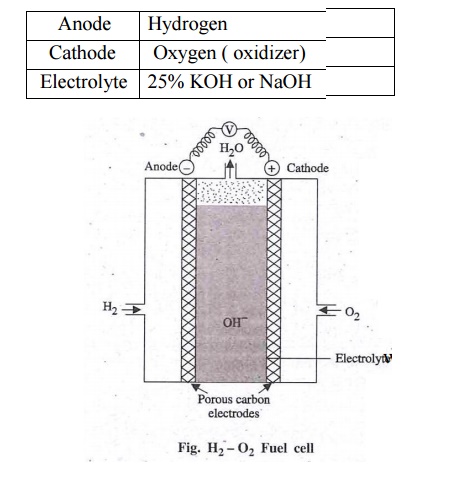 Two porous electrodes – Made of compressed carbon containing a catalyst like pt / pd.

It consists of two porous electrodes anode and cathode. In between two electrodes an electrolytic solution 25% KOH or NaOH filled.

ii. No unwanted noise and less maintenance. iii. No pollution

H2 – O2 fuel cell, the product is water, so no need of fuel because fuel is water