Sufficient sources of energy are necessary for industrialized nations. Energy is used for heating, cooking, transportation and manufacturing. Energy sources can be generally classified as conventional and non-conventional. Over 85% of the energy used in the world is from conventional sources such as fossil fuels (coal and oil) and nuclear power.

The convenrtional energy sources depend on coal and oil. The burnt fuels result in the release of CO2 and other gases into the atmosphere causing environmental damage. There are abundant renewable sources of energy such as wind, sun, water, and biomass. These sources are pollution ofree and known as “ green energy “.

The enormous energy thus released during the Nuclear Fission & Fusion reaction is known as Nuclear Energy.

2.1 N uclear fission: It is the nuclear reaction in which heavy isotopes are split into lighter nuclei on bombardment by neutrons. Fission reaction of U235 is given below

Process of combination of lighter nuclei into heavier nucleus with simultaneous liberation of largeamount of energy. (e.g) solar system 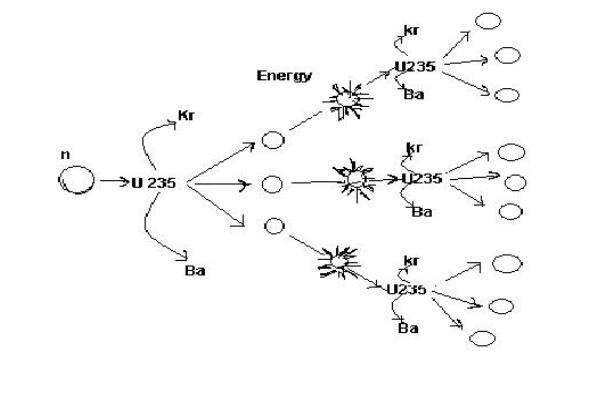 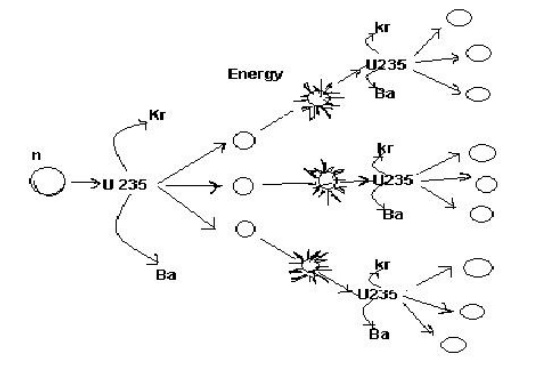 Differences between fission and fusion reaction 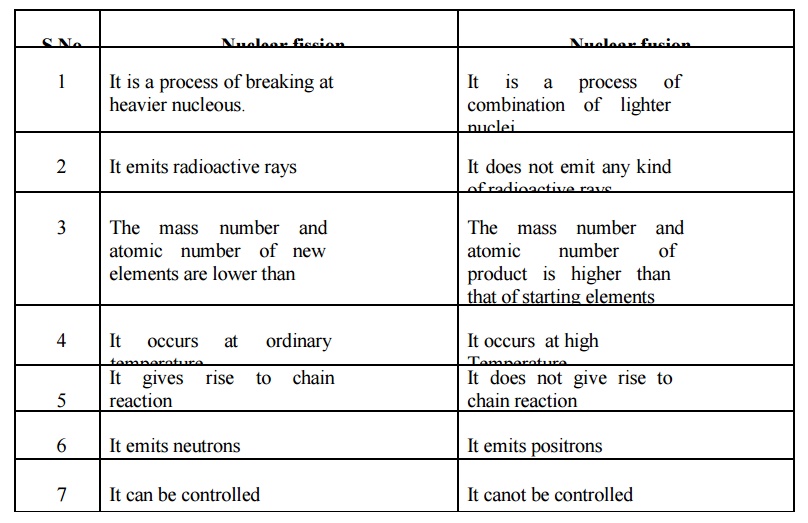 1 It is a process of breaking at heavier nucleous.

4 It occurs at ordinary temperature

5 It gives rise to chain reaction

7 It can be controlled

1. It is a process of combination of lighter nuclei.

2. It does not emit any kind of radioactive rays

3. The mass number and atomic number of product is higher than that of starting elements

4. It occurs at high Temperature

5. It does not give rise to chain reaction

7. It canot be controlled

Light water nuclear power plant is one in which U235 feed rods are submerged in water.

Here the water acts as coolant and moderator.

The fission reaction is controlled by inserting or removing the control rods of B10 automatically from the spaces I between the fuel rods.

The heat emitted by U235 absorbed by the coolant in the fuel core is Heat is transferred to sea water and then converted into steam. The steam then drives the turbines, generating electricity.

A nuclear reactor with conversion or multiplication factor greater than one is a breeder reactor. A

The minimum amount of fissile material (U235) required to continue the nuclear chain reaction is called critical mass.

The energy that derive directly from sunlight and can be converted into more useful forms is known as Solar energy.

The energy conversion my occur iterms of heat & current.

The principle of Solar cell is based on photovoltaic effect. When light radiation falls on the p-n junction semi conductor device, charge separation takes place and a potential difference is setup. This causes flow of electrons and produces electricity.

When sun rays all on the top layer of p- type semiconductor, electrons from valence band are promoted to conductance band and cross the p-n junction into the n-type semiconductor. A potential difference is set up between the two layers. This causes flow of electrons and produces electricity. When the „p‟ and „n‟ layers are connected to an external circuit, electrons flow from „n‟ layer to „p‟ layer and current is generated.

A large number of solar cells are connected in series to form a solar battery. Solar battery produces enough electricity to run water pump, etc., They are also used in remote areas where conventional electricity is not available. 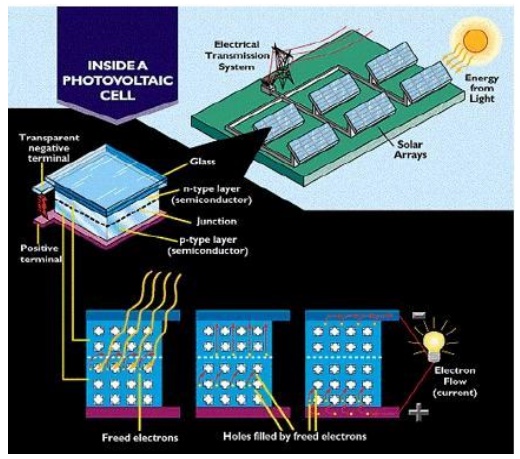 Solar cells are superior to other type of cells, because they are non-polluting and eco-friendly.

Silicon solar cells are used as a source of electricity in space crafts and satellites.

They have long life.

Storage of energy is not possible with solar cells.

5.1 Generation of electricity from wind mill

Condition: Wind speed should be more than 15km/hr.

(i) It is cheap and economical. (ii) It is renewable

(iii) It does not cause pollution.

It is an arrangement of several electrochemical cells connected in series that can be used as a source of direct electric current. 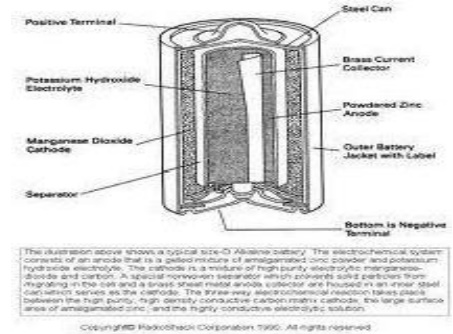 In these cells, the electrode reactions can be reversed by passing an external energy.

They can be recharged by passing electric current.

They are called storage cells or accumulators.

Here the powdered zinc is mixed with KOH and MnO2 to get a gel. A Carbon rod acts as cathode. IT is immersed in KOH The outside cylindrical body is made up of zinc.

Number of Pb plates and PbO2 plates are connected in parallel.

Plates are separated from adjacent ones by insulators like rubber or glass fiber.

This arrangement is immersed in dil. H2SO4

It is used to supply current mainly in automobiles such as cars. Buses, trucks, etc.,

It consists of a cadmium anode. A metal grid containing a paste of NiO2 acting as a cathode. KOH is electrolyte

Uses: It is used in calculators. Electronic flash units, transistors and cordless appliances.

It consists of a lithium anode and a TiS2 cathode.

A solid electrolyte generally a polymer is packed in between the electrodes.

The electrolyte permits the passage of ions but not electrons.

Other types of secondary lithium batteries

It is the cell future. Why?

Its cell voltage is high, 3.0VSince Li is a light weight metal, only 7kg material required to produce 1mole of electrons.Since all the constituents of the battery are solids, there is no risk of leakage from the battery. This battery can be made in a variety of shapes and sizes.

Li battery is more expensive than other batteries

It is a solid state battery. Solid electrolyte is used.

It has a lithium anode and a TiS2 cathode. A solid electrolyte, a polymer, is packed in between the electrodes. The polymer electrolyte permits the passage of ions but not that of electrons.

The battery is recharged by passing an external current, which drives the lithium ions back to the anode. The overall reaction is

This cell has a voltage of 3.oV.

Li is a light-weight metal. Just 7g (1 mole) of Li is required to produce 1 mole of electrons.

Li has the most negative Eo value. So it gives a higher voltage than other cells. (iv)

It is a total solid state battery. There is no risk of current leakage from the battery. (v) It is manufactured in a variety of sizes and shapes.

It is more expensive than other batteries.

Fuel cell is a voltaic cell. It converts chemical energy of the fuels directly into electricity without combustion. In these cells, the reactants and electrolytes are continuously

supplied to the cell.

It is the simplest and most successful fuel cell. The fuel-hydrogen and the oxidiser-oxygen and the liquid electrolyte are continuously supplied to the cell.

The cell has two porous electrodes, anode and cathode. The electrodes are made of compressed carbon containing a small amount of catalyst (Pt, Pd, Ag). Between the two electrodes an electrolytic solution, 25% KOH is filled 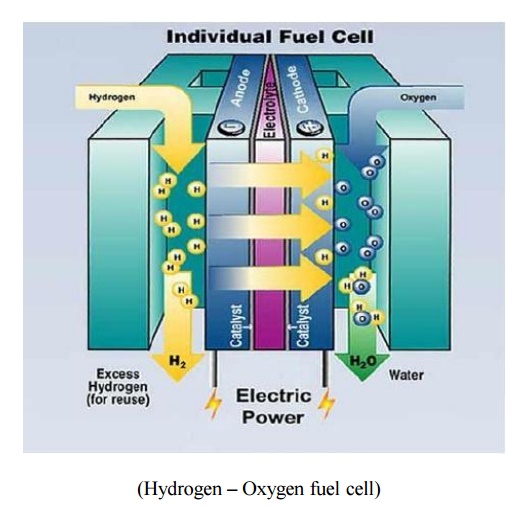 They are efficient and instant in operation.

They are pollution free.

They produce electric current directly from the reaction of a fuel and an oxidiser.

They are light in weight

Electrodes are expensive and short lived.

H2 should be pure.

H2 - O2 fuel cells are used in space crafts, submarines to get electricity

In H2 - O2 fuel cell, the produt water is a valuable source of fresh water for astronauts

The process of splitting of heavier nucleus into two or more smaller nuclei with simultaneous liberation of large amount of energy is called Nuclear Fission.

The process of combination of lighter nuclei into heavier nuclei, with simultaneous liberation of large amount of energy is called Nuclear Fusion.

A fission reaction, where the neutrons from the previous step continues to propagate and repeat the reaction is called Nuclear Chain Reaction.

The nucleides like U238, Th232  which do not undergo fission reaction is known as

The minimum amount of fissile material (U235) required to continue the nuclear chain reaction is called critical mass.

The energy that derive directly from sunlight and can be converted into more useful forms is known as Solar energy.

Photogalvanic cell is one, which converts the solar energy (energy obtained from the sun ) directly into electrical energy.

Moving air is called wind. The energy possessed by wind is because of its high speed. The wind energy is harnessed by making use of wind mills, sky sail, ladder mill, kite ship etc.

Fuel cell is a voltaic cell which converts the chemical energy directly into electricity without combustion. In these cells, the reactants, products and the electrolytes pass through the cell.

Battery is an arrangement of several electrochemical cells connected in series that can be used as a sources of direct electric current.