The structure and biological functions of five classes of immu-noglobulins (IgG, IgM, IgA, IgE, and IgD) are described below:

The structure and biological functions of five classes of immu-noglobulins (IgG, IgM, IgA, IgE, and IgD) are described below:

IgG is a 7S immunoglobulin with a molecular weight of 150,000 Da. It has a half-life of 23 days—longest among all the immunoglobulins. Other properties of the IgG are given in Table 13-2.

IgG is the most abundant class of immunoglobulins in the serum, comprising about 80% of the total serum immuno-globulin. There are four IgG subclasses IgG1, IgG2, IgG3, and IgG4—so numbered according to their decreasing concentra-tions in serum. Though the differences between these subclasses are minute, their functions vary as follows:

1.        IgG1, IgG3, and IgG4 are special because these are the only immunoglobulins with the ability to cross the placen-tal barrier. They play an important role in protecting the developing fetus against infections. 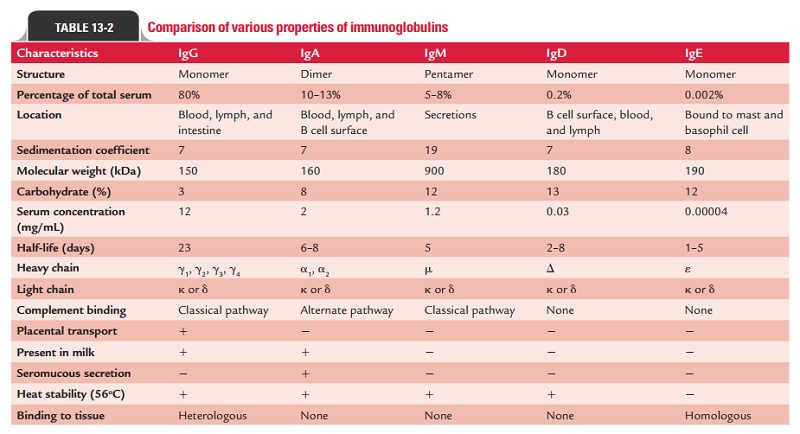 3.        IgG1 and IgG3 bind with high affinity to Fc receptors on phagocytic cells and thus mediate opsonization. IgG4 has an intermediate affinity for Fc receptors and IgG2 has an extremely low affinity.

Two chains, along with two or light chains, joined together by disulfide bonds, comprise an IgG molecule as follows:

·           It consists of one variable VH domain and a constant region with three domains designated CH1, CH2, and CH3.

·           Proteolytic enzymes, such as papain and pepsin, cleave an IgG molecule in the hinge region to produce Fab and F (ab´) 2 and Fc fragments.

There are four subclasses of IgG in humans with four corre-sponding γ chain isotypes designated -1, -2, -3, and -4. IgG1, IgG2, IgG3, and IgG4 show differences in their hinge regions and differ in the number and position of disulfide bonds that link two chains in each IgG molecule. There is only a 5% difference in amino acid sequence among human chain γ isotypes, exclusive of the hinge region. Cysteine resi-dues, which make it possible for interheavy (γ ) chain disulfide bonds to form are found in the hinge area. IgG1 and IgG4 have two interheavy chain disulfide bonds, IgG2 has 4, and IgG3 has 11. The IgG, is distributed equally in the intra- and extra-vascular compartments.

IgM constitutes about 5–8% of total serum immunoglobulins. It is distributed mainly intravascularly. It is a heavy molecule (19S) with a molecular weight varying from 900,000 to 1,000,000 Da (millionaire molecule). It has a half-life of 5 days (Table 13-2).

IgM is basically a pentamer, composed of five immuno-globulin subunits (monomeric subunits, IgMs) and one molecule of J chain. Each monomeric IgM is composed of two light chains ( k or γ light chains) and two heavy chains ( μ). The heavy chains are larger than those of IgG by about 20,000 Da, corresponding to an extra domain on the constant region (CH4). 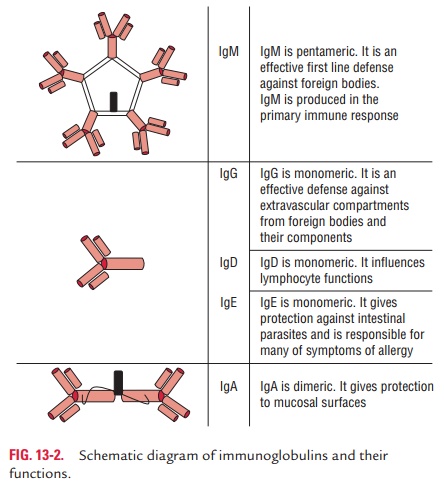 The immunoglobulin chain is a 72 kDa, 570-amino acid heavy polypeptide chain comprising one variable region, des-ignated VH, and a four-domain constant region, designated CH1, CH2, CH3, and CH4. The chain does not have a hinge region. A “tail piece” is located at the carboxy terminal end of the chain. It comprises 18-amino acid residues. A cysteine resi-due at the penultimate position of a carboxy terminal region of the μ chain forms a disulfide bond that joins to the J chain. There are five N-linked oligosaccharides in the μ chain of humans.

Monomeric IgM, with a molecular weight of 180,000 Da, is expressed as membrane-bound antibody on B cells. As mentioned earlier, the J chain found in the IgM molecule was believed to play a major role in the secretion of its polymer-ized form. Being present on the membrane of B cells, IgM acts as the antigen-binding molecule in the antigen–antibody complex.

Because of its pentameric structure with 10 antigen-binding sites, serum IgM has a higher valency than the other isotypes. An IgM molecule can bind 10 small hapten molecules; however, because of steric hindrance, only five or fewer molecules of larger antigens can be bound simultaneously.

IgA consist of heavy chain that confers class specificity on IgA molecules. The chain is a 58-kDa, 470-amino acid residue heavy polypeptide chain. The chain is divisible into three con-stant domains, designated CH1, CH2, and CH3, and one vari-able domain, designated VH. Hinge region is situated between CH1 and CH2 domains. An additional segment of 18-amino acid residues at the penultimate position of the chain contains a cysteine residue where the J chain can be attached through a disulfide bond. IgA occurs in two forms: serum IgA and secre-tory IgA.

Serum IgA: It is present in the serum and is a monomeric 7Smolecule with a molecular weight of 60,000 Da. It has a half-life of 6–8 days. It has two subclasses, IgA1 and IgA2, which are two -chain isotypes -1 and -2, respectively. The -2 chain has two allotypes, A2m (1) and A2m (2), and does not have disulfide bonds linking heavy to light chains. Differences in the two chains are found in two CH1 and five CH3 posi-tions. Thus, there are three varieties of -heavy chains in humans.

Secretory IgA: It is a dimer or tetramer and consists of aJ-chain polypeptide and a polypeptide chain called secretory component, or SC, or secretory piece (Fig. 13-3). The SC is a polypeptide with a molecular weight of 70,000 Da and is pro-duced by epithelial cells of mucous membranes. It consists of five immunoglobulin-like domains that bind to the Fc region domains of the IgA dimer. This interaction is stabilized by a disulfide bond between the fifth domain of the SC and one 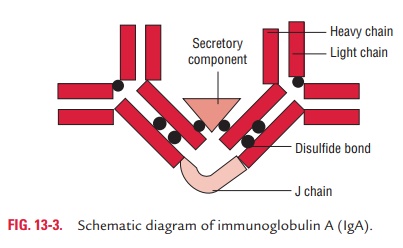 of the chains of the dimeric IgA. IgA-secreting plasma cells are concentrated along mucous membrane surfaces. The daily production of secretory IgA is greater than that of any other immunoglobulin. Secretory IgA is the major immunoglobu-lin present in external secretions, such as breast milk, saliva, tears, and mucus of the bronchial, genitourinary, and digestive tracts. IgA activates the complement not by classical pathway but by alternative pathway.

IgE constitutes less than 1% of the total immunoglobu-lin pool. It is present in serum in a very low concentration (0.3 g/mL). It is mostly found extravascularly in lining of the respiratory and intestinal tracts. IgE is an 8S molecule with a molecular weight of 190,000 Da and half-life of 2–3 days. Unlike other immunoglobulins that are heat stable, IgE is a heat-labile protein—easily inactivated at 56°C in 1 hour (Table 13-2). 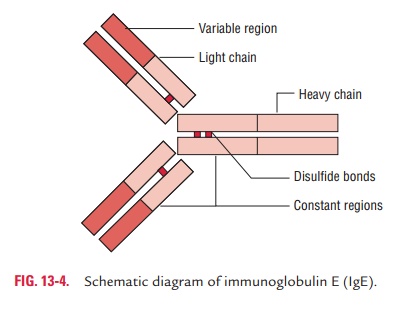 Two e heavy polypeptide chains, along with two or two light chains, fastened together by disulfide bonds, comprise an IgE molecule. The e chain is a 72-kDa, 550-amino acid residue polypeptide chain. It consists of one variable region, designated VH, and a four-domain constant region, designated CH1, CH2, CH3, and CH4. This heavy chain does not possess a hinge region. In humans, the heavy chain has 428 amino acid residues in the constant region (Fig. 13-4). IgE does not cross the placenta or fix the complement.

Immunoglobulin chain is a 64-kDa, 500-amino acid residue heavy polypeptide chain consisting of one variable region, designated as VH, and a three-domain constant region, designated as CH1, CH2, and CH3. There is also a 58-residue amino acid residue hinge region in human chains. Two exons encode the hinge region. IgD is very susceptible to the action of proteolytic enzymes at its hinge region. Two separate exons encode the membrane component of chain. A distinct exon encodes the carboxy terminal portion of the human chain that is secreted. The human chain contains three N-linked oligosaccharides.