Chapter: Medical Microbiology: An Introduction to Infectious Diseases: Infections in the Immunocompromised Patient

Defects in mucosal barriers represent an important prelude to infection by allowing or-ganisms that normally colonize the skin, gastrointestinal tract, or upper airway access to deeper more vulnerable tissues. Burns, extensive trauma, and decubitus ulcers remove the epithelial defense of the skin; however, less obvious factors, such as cytotoxic therapy, may cause damage to mucosal surfaces that predisposes to attachment and replication of potentially pathogenic organisms and can cause loss of host-clearing mechanisms (eg, cil-iary function). Defects in intestinal mucosal barriers are often associated with infections caused by Gram-negative aerobic and anaerobic enteric bacteria from the gut flora. Staphylococcal, streptococcal, and pneumococcal infections of the lung are particularly likely when the respiratory epithelium is damaged, whereas Pseudomonas aeruginosa in-fections are a common feature of severe burns.

Defects in Number or Function of Phagocytes

When the natural barriers of the skin and mucosal surfaces are breached, the next major line of defense is the circulating phagocytes. To defend against infection, there must be an adequate number of these cells, and they must be able to move to the site of infection and ingest and kill invading organisms. Numerous defects in these processes have been described.

Although normal neutrophil granulocyte counts vary greatly according to the age, sex, and race of the patient, the usual value is 2500 to 7500 cells/mm3 of blood in adults. Neutrope-nia may result from inherited or acquired diseases, malignancies, use of cytotoxic drugs, or adverse reactions to therapeutic agents such as chloramphenicol. If the absolute neutrophil count decreases to fewer than 500 cells/mm3, the incidence of infections increases markedly, and counts below 100 cells/mm3 are associated with bacteremia. Immunocom-promised patients differ in their ability to tolerate profound neutropenia. For example, pa-tients with acquired immunodeficiency syndrome (AIDS) may not experience bacteremiaas frequently as patients receiving chemotherapy. This may reflect damage to mucous membranes from the chemotherapy in addition to the neutropenia. Severe neutropenia is accompanied most frequently by bacterial infections caused by the pyogenic Gram-positive cocci, Enterobacteriaceae, P. aeruginosa, and H. influenzae. Fungal infections with Candida, Aspergillus, or the Zygomycetes are also common.

Defects in Chemotaxis and Leukocytic Function

Defects in phagocytic defenses can be caused by multiple mechanisms that result in inad-equate leukocyte chemotaxis or function (Table 71 – 2). Deficiencies of complement or immunoglobulins can decrease chemoattractants at the site of an infection, and certain metabolic diseases such as diabetes and uremia can alter the microenvironment of leuko-cytes to reduce their mobility and responsiveness to stimuli. This phenomenon has also been shown to occur in immune complex diseases such as lupus erythematosus. In each case, removal of the leukocyte to a normal environment restores its mobility and ability to respond chemotactically. 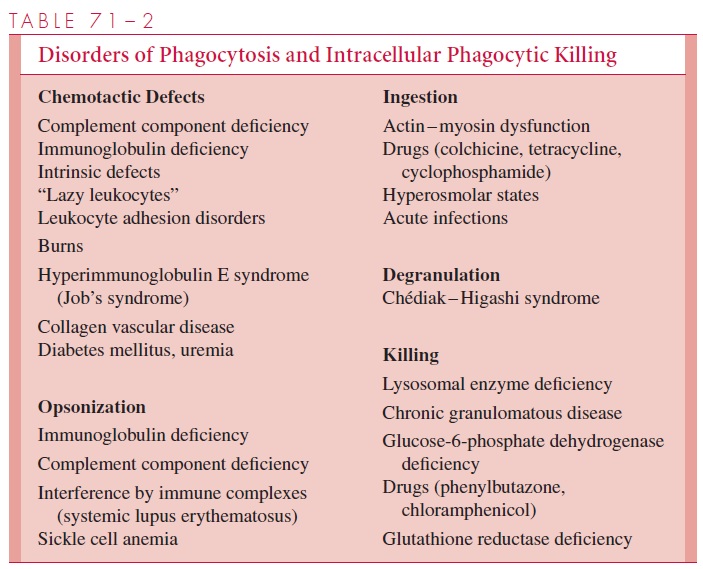 Several genetic diseases produce specific defects in granulocyte bactericidal mecha-nisms that result in an immunocompromised host. Because they frequently diminish life span, these illnesses are usually seen in children. The most studied is chronic granuloma-tous disease, a group of inherited disorders of phagocytic cell superoxide production associated with frequent pyogenic infections, usually caused by catalase-positive organ-isms, such as Staphylococcus aureus. In Chédiak-Higashi disease, neutrophil lysosomes fail to fuse with the phagosome and the cells fail to destroy ingested organisms. These children also suffer recurrent infections with pyogenic organisms.

The spectrum of infections in patients with phagocytic dysfunction is wide and in-cludes repeated bouts of cellulitis, pharyngitis, perirectal and other abscesses, pneumonia, osteomyelitis, and bacteremia. Many pyogenic organisms other than staphylococci can be involved. Antimicrobic treatment given either therapeutically or prophylactically has helped greatly in the care of these patients, but they still suffer repeated bouts of infection that may ultimately prove fatal.

Several congenital and acquired disorders can lead to inadequate synthesis of im-munoglobulins as a result of deficiency or dysfunction of B lymphocytes. The most com-mon and least serious is immunoglobulin A deficiency, which is associated with increased risk of gastrointestinal tract infection, especially with the parasite Giardia lamblia. Indi-viduals with severe defects in IgG and IgM production (hypogammaglobulinemia or agammaglobulinemia) are prone to recurrent infections with encapsulated organisms such as S. pneumoniae or H. influenzae, which require opsonization for adequate phagocytosis. Sinusitis, otitis media, bacterial pneumonia, and bacteremia are the most common types of infection. Acquired deficiency in immunoglobulin production may occur in AIDS, multiple myeloma, non-Hodgkin’s lymphoma, and certain types of chronic lymphocytic leukemia that involve monoclonal proliferation of one immunoglobulin-producing cell line and relative deficiencies of cells producing other antibodies. These patients are also prone to infections by systemically invasive organisms.

Repeated injections of immunoglobulins (immune serum globulin) may decrease the incidence and morbidity of infections in patients with hypo- or agammaglobuline-mia. In those capable of some immune responses, the use of pneumococcal vaccine (Pneumovax) may provide a degree of protection against overwhelming infection with this organism.

Defects of the complement system also predispose patients to many infections. Individu-als with deficiencies in C3 are prone to infections with encapsulated organisms that require opsonization and to a range of infections similar to those seen in patients with hy-pogammaglobulinemia. Those with deficiencies in later components in the complement sequence are prone to develop recurrent bacteremia caused by Neisseria meningitidis or Neisseria gonorrhoeae if they are infected with these species. Patients with defects in theearly complement components, C1, C2, or C4, have less of a problem than those with later complement pathway deficiencies, because they retain the ability to use the alterna-tive complement pathway to activate C3 and hence C5 to C9.

Both congenital and acquired abnormalities of the cell-mediated immune system occur. Congenital abnormalities, which are uncommon, include thymic dysplasia syndrome, ataxia telangiectasia, and severe combined immunodeficiency (both T- and B-cell defi-ciency). AIDS, now the most important cause of acquired cellular immunodeficiency, causes a depletion of CD4+ T lymphocytes. Another common source of acquired defects is seen especially in transplant recipients due to treatment with immunosuppressive or cy-totoxic agents that damage both macrophage precursors and T lymphocytes. Cytotoxic chemotherapy for cancer with cyclophosphamide and other antimetabolites has these ef-fects and also inhibits humoral immune responses. Glucocorticoids can have multiple ef-fects, causing neutropenia, lymphopenia, and monocytopenia through suppression of cell production, inhibition of mobilization of neutrophils to the site of inflammation, and inter-ference with cell-mediated immune responses through alteration of the responsiveness of monocytes and macrophages to lymphokines. In addition, glucocorticoids impair the func-tion of cells lining the mucosal surfaces, thus increasing the chance of microbial invasion by this route. Combinations of glucocorticosteroids and immunosuppressive drugs are es-sential in the treatment of certain diseases but are particularly likely to interfere with the ability of a patient to combat new or established infections.

In general, defects in cell-mediated immunity are associated with increased susceptibility to infection with specific opportunistic pathogens, particularly facultative or obligate intracellular pathogens such as cytomegalovirus, fungi and mycobacteria (see Table 71 – 1). For exam-ple, infection with Mycobacterium tuberculosis and other mycobacteria in AIDS patientsis an important clinical problem. Because of the wide range of potential infecting organ-isms, the sites of infection associated with defects in cell-mediated immunity are varied. These include superficial skin infections, lung infections, pharyngitis, otitis, sinusitis, bacteremia, retinitis, and abscesses. Simultaneous infections with multiple organisms are common. 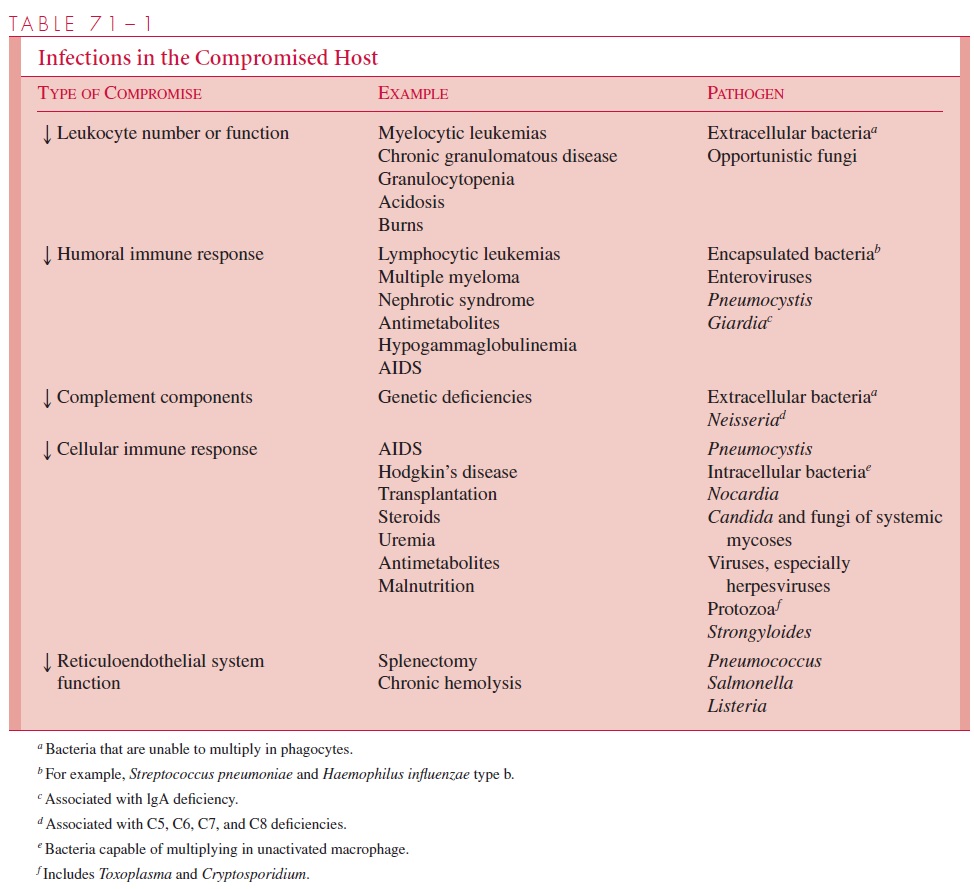