Human Papillomaviruses: Properties of the Virus

Human papillomaviruses (HPVs) are the causative agents of papillomas, which are the benign tumors of squamous cells or warts on the skin.

Human papillomaviruses (HPVs) are the causative agents of papillomas, which are the benign tumors of squamous cells or warts on the skin. These are also associated with cancerous con-ditions in humans, such as cervical carcinoma. HPVs causing diseases in humans are summarized in Table 56-1. 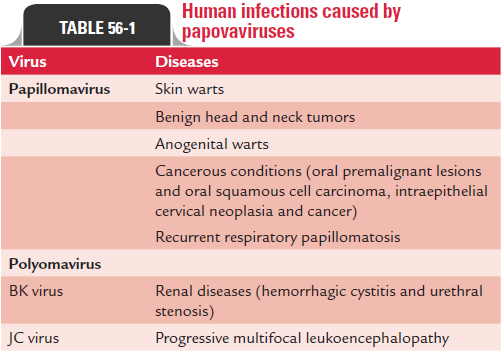 Based on DNA homology, tissue tropism, and association with oncogenesis, the HPVs have been classified into 16 groups (A–P), containing at least 70 types.

·           The viral genome is a supercoiled, double-stranded DNA composed of approximately 3000 base pairs (bp). The DNA encodes seven to eight early genes (E1–E8) and two late (L1 and L2) genomes. All these genes are present in a single strand, that is the “1” strand. Two of the early genes E6 and E7 are implicated in carcinogenesis, whereas E1 and E2 partici-pate in DNA replication.

The early genes of the virus are responsible for growth of cells and facilitate replication of viral genome during cell division. The virus-induced cell growth causes thickening of the basal and prickle cell layer of stratum spinosum. The late genes encode for the expression of structural proteins, which are present in the differentiated upper layers of the skin. This causes the tissues to be excreted with the dead cells of the upper layer.

The HPVs show a widespread diversity. Based on the homology between their genomes, more than 100 distinct HPVs have been recognized. Certain HPV types show distinct predilection for infecting certain tissues. Approximately 30 types of HPVs infect the genital tract: HPV-6 and HPV-11 causing the genital warts. HPV types 1–6 primarily cause skin warts.

Human papilloma viruses do not grow on any cell culture. Hence, cell cultures are not useful for diagnosis of HPV infections.