The effects of anesthetic agents and vasoactive drugs are multifactorial .

The effects of anesthetic agents and vasoactive drugs are multifactorial (Table 17.1). They are described assuming nor-mal brain anatomy and physiology, which is not commonly the situation for the neurosurgical patient. The potent inhaled anesthetics are generally cerebral vasodilators, which attenuate cerebral autoregulation. Inhalation anesthetics pro-duce increases in CBF in a dose-dependent manner while producing progressive depression of cerebral metabolism. The mechanism by which inhalation anesthetics produce vasodilation is not clearly understood. Mechanisms that par-tially explain the vasodilation include effects on nitric oxide (NO) and ATP-dependent potassium channels. 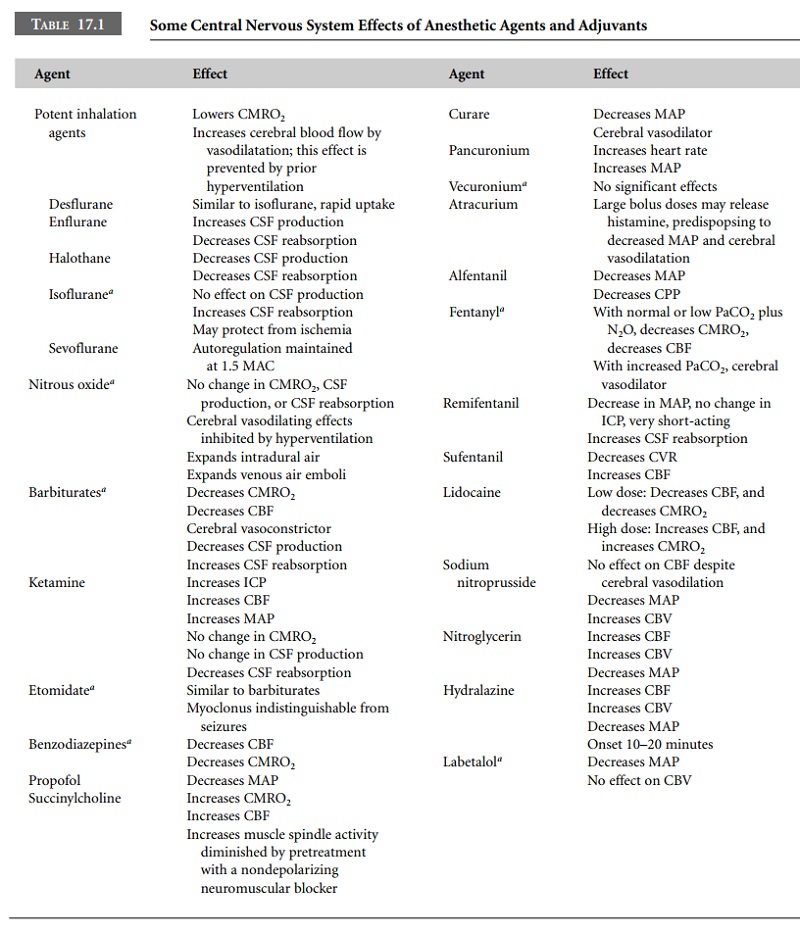 Isoflurane increases CBF in a dose-dependent fashion, but increases in subcortical CBF are greater than neo-cortical. CO2 reactivity is maintained but is greater in the awake state. Autoregulation is adequately maintained at 1 MAC (minimal alveolar concentration) but is progres-sively impaired by higher concentrations. Sevoflurane has very similar CBF effects to isoflurane, although it appears to produce slightly less vasodilation and autoregulation in humans is maintained up to 1.5 MAC. Desflurane produces an increase in CBF similar to that seen with isoflurane but greater than that seen with sevoflurane at >1 MAC. Autoregulation is progressively abolished as the dose increases. Nitrous oxide (N2O) is used in many neurosurgical anesthetics. Although it is a cerebral vasodilator, this effect is diminished by hyperventilation, barbiturates, and moderate concentrations of potent inhalation agents. When adminis-tered on its own, N2O increases both CBF and metabolism. However, when added to the background of another anes-thetic, it increases CBF without changing metabolism.

Most of the intravenous anesthetics are cerebral vaso-constrictors and maintain the relationship between CMRO2 and CBF. Barbiturates, notably thiopental, reduce CMRO2 primarily and CBF secondarily. Thiopental acts as a cerebral vasoconstrictor. CO2 reactivity is maintained but is quanti-tatively reduced compared with the awake state. Cerebral autoregulation is also maintained intact. Thiopental is an excellent drug to acutely lower ICP; however, amounts suf-ficient to induce an isoelectric electroencephalogram (EEG) can produce significant hemodynamic side-effects.

Ketamine causes a significant rise in CBF without an important effect on metabolic rate. It is not considered a wise choice in the neurosurgical setting. However, small to moderate doses in a background of volatile anesthetic or intravenous infusion have not been shown to be signifi-cantly harmful. The trauma patient with hypovolemia and concurrent injuries may be a suitable candidate for keta-mine as blood pressure and CPP may be more easily main-tained. Etomidate behaves similarly to thiopental and is an appropriate induction agent for patients who cannot tolerate the hemodynamic effects seen with thiopental. Myoclonus, which occurs after etomidate administration, may be difficult to differentiate from seizure activity. Benzodiazepines offer beneficial effects on elevated ICP by lowering CBF and diminishing CMRO2, without meaningful effects on CSF dynamics.

Propofol is a short-acting intravenous agent used for induction and maintenance of anesthesia. It appears to main-tain the relationship between CBF and CMRO2. Propofol does not cause cerebral vasodilation and does not interfere with the normal response to PaCO2. It can be used to sup-plement anesthesia during long operations or as part of a total intravenous technique. It is particularly useful for, and may be a good choice for, neurodiagnostic procedures, keeping in mind that it produces dose-dependent decreases in blood pressure.

Muscle relaxants have no direct intracerebral effects because they do not cross the BBB. Nevertheless, they possess indirect effects because of their actions in the periphery, which are sometimes significant. There is clear evidence from both experimental animals and humans that succinylcholine can increase ICP under conditions of intracranial hypertension. The magnitude of the increase is typically small and transient. It has been shown in humans that ICP changes caused by succinylcholine can be blocked by preadministration of a defasciculating dose of a non-depolarizing relaxant. A probable mechanism is the massive fasciculation-induced afferent barrage from muscle spin-dles to the brain that causes transient increases in meta-bolic rate and coupled increases in CBF. The decision to use this agent is determined by the need to rapidly secure the airway. Pretreatment with a small dose of a nondepo-larizing agent is helpful and recommended.

The nondepolarizing agents such as vecuronium, rocuronium, and cisatracurium have no significant hemo-dynamic or ICP effects. There is clear evidence that the duration of action of nondepolarizing muscle relaxants is reduced by a variety of anticonvulsant medications. The mechanism remains unclear. Most patients requiring craniotomy are being treated with anticonvulsants and thus the nondepolarizing relaxant dosing regimen will require alteration. Atracurium and cisatracurium seem to be largely resistant to these effects, most likely because metabolism is achieved by Hoffman elimination.

Opioids are known to produce respiratory depression, which results in an increase in PaCO2. Consequently, opioids are administered sparingly in the spontaneously breathing patient with cerebral disease. Opioids at low doses produce very little effect on CBF provided PaCO2 is not allowed to rise. During controlled ventilation with normocapnia or hypocapnia, opioids provide significant advantages. Independently, fentanyl seems to have little effect on CBF or CMRO2, but when combined with N2O it decreases CMRO2 and CBF, which is due to the hemo-dynamic changes caused by this combination of anesthetic agents. It increases the rate of CSF reabsorption without affecting its rate of production. There is much controversy about how and whether opioids, such as sufentanil and alfentanil, increase ICP. With cerebral autoregulation intact, a drop in blood pressure results in a compensatory vasodi-lation to maintain CBF. This increases cerebral blood volume and thus ICP. Remifentanil has become increasingly used in neurosurgery for its rapid onset and offset, and titrat-ability to changing stimuli. However, the lack of residual analgesia requires a plan for postoperative pain relief as well as blood pressure control.

Sodium nitroprusside is a direct-acting smooth muscle relaxant that produces arteriolar and venous dilatation. It is sometimes used in neurosurgery for control of arterial blood pressure. Although it acts as a cerebral vasodilator and decreases MAP, there is little effect on CBF. However, cerebral blood volume is increased and ICP may be elevated. It is best avoided if ICP is high. Thiopental, lidocaine or labetalol should be used instead. Nitroglycerin is primarily a veno-dilator and coronary vasodilator that acts by relaxing smooth muscle and works on the intracerebral venous capacitance vessels. Hydralazine is a direct arteriolar vasodilator with an onset time of 10–20 minutes. It increases cerebral blood volume and may increase ICP when the dura is closed. Labetalol, a mixed α- and β-blocker, lowers MAP by lowering systemic vascular resist-ance and depressing cardiac output. It has no direct effect on cerebral blood vessels.