The development of disease in a particular aquaculture system involves several factors: the farmed fish (host), the disease-causing organisms (pathogens) and the surroundings (environment).

The development of disease in a particular aquaculture system involves several factors: the farmed fish (host), the disease-causing organisms (pathogens) and the surroundings (environment). A complex interaction exists among these three factors as represented in the diagram of three overlapping circles (Fig. 1-1). For a disease situation to exist, there should be a potential pathogen, a susceptible host, and environmental conditions that bring about either in-creased virulence of the pathogen, or decreased resistance of the host. 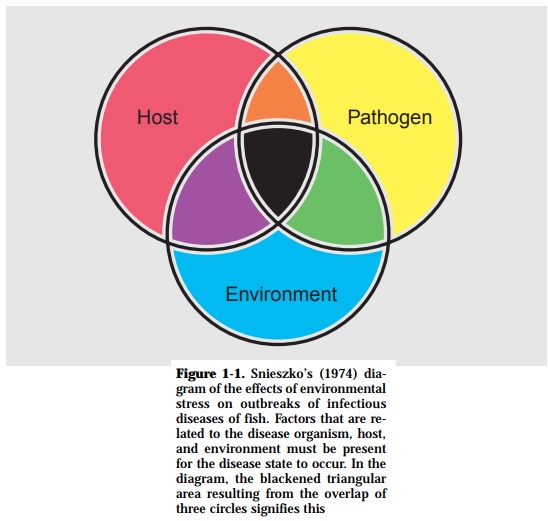 A host (fish or any farmed aquatic animal) can be either resistant or suscep-tible to a given disease. Resistance or susceptibility of the host depends on (a) age or size of the host organism, (b) species, (c) defense mechanisms em-ployed and (d) the health of the fish, including its nutritional state.

Biological agents may initiate disease. They are the primary focus of attention when dealing with infectious diseases. These agents include viruses, bacteria, fungi and parasites. They are often called infectious disease agents. They can be present in the water or in sediment as part of the normal flora. Their pres-ence and number are largely influenced by environmental factors like tempera- ture, dissolved gases, pH, and availability of food. The two major characteris-tics of an infectious agent are (a) capability for direct transmission and (b) ability to multiply in the host tissue. The mode of their transmission is either

(a) vertical or (b) horizontal. In vertical transmission, infectious agents transfer from parent to offspring. The female or male broodstock may be carriers of diseases, and transfer them to their offspring through the egg or sperm. In hori-zontal transmission, infectious agents come in contact with the hosts through the water, the feeds or through carrier animals that are in the environment.

The environment of cultured fish is composed of the water and its holding system like tanks, ponds, cages, pens, etc. Stability of the environment, espe-cially in the physico-chemical parameter of the water brought about by the fish culture activity itself or by natural causes, will determine the health of the fish. Fluctuations in temperature, pH, salinity or dissolved oxygen beyond the opti-mum range for the host may lead to stress and disease. The key to successful fish culture is to understand and manage the environment of the host organ-ism. Understanding the role of the environment in affecting the nature and cause of disease is essential to the prevention and control of disease.

The human element is an important consideration in the farming of aquaticanimals. Aquaculture technicians and other personnel should have adequate knowledge and understanding of the species they culture to assure the success of an aquaculture operation. Lack of experience or insufficient personnel may lead to costly mistakes and poor yield. Farming strategies should consider the crucial role of the people involved in every stage of production.

Handling, overcrowding, malnutrition, or poor environmental conditions arestressful to cultured fish. Stress is defined “as the sum of the physiological responses the fish makes to maintain or regain its normal balance.” Response and adaptation to stress takes place in three phases (adapted from Roberts 1978):

a.  In the alarm stage, the fish attempts to escape from the problem.

b.  If escape is not possible, the fish’s body attempts to react to the environ-mental change. This is the adaptive stage, where the fish tries to adjust to the change and reach a new equilibrium, both physiologically and behav-iorally, to survive the new environmental conditions. Although fish may successfully adapt to new and changing conditions, its growth, reproduc-tive capacity and disease immunity may not be maintained as in the previ-ous level because, at this stage, the fish deals with the stress as a priority. It is in this stage that disease problems are more likely to occur. Extended exposure of fish to environmental deterioration disturbs its normal function and decreases its chances of survival

c.   If the environmental change is so great that the fish cannot adapt to it, then the fish stress response finally reaches an exhaustion stage and the fish dies.

Abrupt change in salinity, pH or temperature, especially at levels beyond the animals’ tolerable range, cause significant stress in fish and make them succumb to secondary infection due to opportunistic microorganisms. Ex-posure to stress may also weaken the defense mechanism of fish.