a. Why did the seagull fail to fly? b. What did the parents do, when the young seagull failed to fly?

The young seagull was alone on his ledge. His two brothers and his sister had already flown away the day before. He had been afraid to fly with them. Somehow, when he had taken a little run forward to the brink of the ledge and attempted to flap his wings, he became afraid. The great expanse of sea stretched down beneath, and it was such a long way down – miles down. He felt certain that his wings would never support him; so he bent his head and ran away back to the little hole under the ledge where he slept at night.

Even when each of his brothers and his little sister, whose wings were far shorter than his own, ran to the brink, flapped their wings, and flew away, he failed to muster up courage to take that plunge which appeared to him so desperate. His father and mother had come around calling to him shrilly, scolding him, threatening to let him starve on his ledge, unless he flew away. But for the life of him, he could not move.

a. Why did the seagull fail to fly?

b. What did the parents do, when the young seagull failed to fly?

That was twenty-four hours ago. Since then, nobody had come near him. The day before, all day long, he had watched his parents flying about with his brothers and sister, perfecting them in the art of flight, teaching them how to skim the waves and how to dive for fish. He had, in fact, seen his older brother catch his first herring and devour it, standing on a rock, while his parents circled around raising a proud cackle. And all the morning, the whole family had walked about on the big plateau midway down the opposite cliff, laughing at his cowardice. 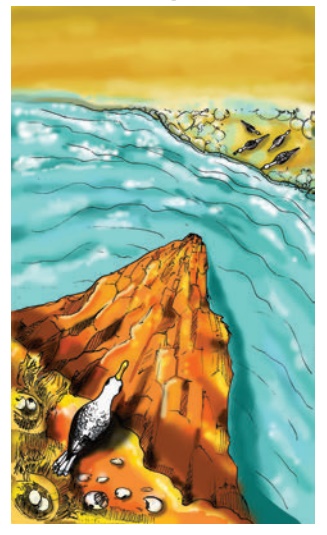 The sun was now ascending the sky, blazing warmly on his ledge that faced the south. He felt the heat because he had not eaten since the previous nightfall. Then, he had found a dried piece of mackerel’s tail at the far end of his ledge. Now, there was not a single scrap of food left. He had searched every inch, rooting among the rough, dirt-caked straw nest where he and his brothers and sister had been hatched. He even gnawed at the dried pieces of eggshell. It was like eating a part of himself.

c. What was the first catch of the young seagull’s older brother?

d. What did the young seagull manage to find in his search for food on the ledge?

He then trotted back and forth from one end of the ledge to the other, his long gray legs stepping daintily, trying to find some means of reaching his parents without having to fly. But on each side of him, the ledge ended in a sheer fall of precipice, with the sea beneath. And between him and his parents, there was a deep, wide crack.

Surely he could reach them without flying if he could only move northwards along the cliff face? But then, on what could he walk? There was no ledge, and he was not a fly. And above him, he could see nothing. The precipice was sheer, and the top of it was, perhaps, farther away than the sea beneath him.

He stepped slowly out to the brink of the ledge, and, standing on one leg with the other leg hidden under his wing, he closed one eye, then the other, and pretended to be falling asleep. Still, they took no notice of him. He saw his two brothers and his sister lying on the plateau dozing, with their heads sunk into their necks. His father was preening the feathers on his white back. Only his mother was looking at him.

She was standing on a little high hump on the plateau, her white breast thrust forward. Now and again, she tore at a piece of fish that lay at her feet, and then scraped each side of her beak on the rock. The sight of the food maddened him. How he loved to tear food that way, scraping his beak now and again to whet it! He uttered a low cackle. His mother cackled too, and looked at him.

e. What did the young bird do to seek the attention of his parents?

f. What made the young seagull go mad?

‘Ga, ga, ga,’ he cried, begging her to bring him over some food. ‘Gawl- ool-ah,’ she screamed back mockingly. But he kept calling plaintively, and after a minute or so, he uttered a joyful scream. His mother had picked up a piece of fish and was flying across to him with it. He leaned out eagerly, tapping the rock with his feet, trying to get nearer to her as she flew across. But when she was just opposite to him, abreast of the ledge, she halted, her legs hanging limp, her wings motionless, the piece of fish in her beak almost within reach of his beak.

He waited a moment in surprise, wondering why she did not come nearer, and then maddened by hunger, he dived at the fish. With a loud scream, he fell outwards and downwards into space. His mother had swooped upwards. As he passed beneath her, he heard the swish of her wings.

g. Why did the young bird utter a joyful scream?

h. Did the mother bird offer any food to the young bird?

Then a monstrous terror seized him and his heart stood still. He could hear nothing. But it only lasted a moment. The next moment, he felt his wings spread outwards. The wind rushed against his breast feathers, then under his stomach and against his wings. He could feel the tips of his wings cutting through the air.

He was not falling headlong now. He was soaring gradually, downwards and outwards. He was no longer afraid. He just felt a bit dizzy. Then, he flapped his wings once and he soared upwards.

He uttered a joyous scream and flapped them again. He soared higher. He raised his breast and banked against the wind. ‘Ga, ga, ga. Ga, ga, ga.’ ‘Gawlool-ah.’ His mother swooped past him, her wings making a loud noise. He answered her with another scream. Then, his father flew over him screaming. Then, he saw his two brothers and sister flying around him, soaring and diving.

Then, he completely forgot that he had not always been able to fly, and commenced to dive and soar, shrieking shrilly.

i. How did the bird feel when it started flying for the first time?

j. What did the young bird’s family do when he started flying?

He was near the sea now, flying straight over it, facing out over the ocean. He saw a vast green sea beneath him, with little ridges moving over it; he turned his beak sideways and crowed amusedly. His parents and his brothers and sister had landed on this green floor in front of him. They were beckoning to him, calling shrilly. He dropped his legs to stand on the green sea. His legs sank into it. He screamed with fright and attempted to rise again, flapping his wings. But he was tired and weak with hunger and he could not rise exhausted by the strange exercise. His feet sank into the green sea, and then his belly touched it and he sank no farther.

He was floating on it. And around him, his family was screaming, praising him, and their beaks were offering him scraps of dog-fish.

He had made his first flight.

Liam O'Flaherty (1896–1984) was an Irish novelist and short story writer and a major figure in the Irish literary renaissance. He was a founding member of the Communist Party of Ireland. A native Irish-speaker from the Gaeltacht, O'Flaherty wrote almost exclusively in English, except for a small number of short stories in the Irish language. He spent most of his time in travelling and lived comfortably and quietly outside the spotlight.