They are called as phosphogens and help to store the high energy. The example for this the creatine phosphate present in the vertebrate muscles, the reaction works in both directions it is a reversible reaction form ATP when ATP is required. When ATP is more, creatine reacts with ATP and forms the phosphocreatine.

Actually, this reaction takes place in two steps. First the enolate form of pyruvate is formed, then the transfer of the phosphate group to ADP occur as second step. The keto pyruvic acid may reduced to lactic acid in the lack of oxygen. Mitochondria isnot involved . Since one molecule of glucose yield 2 molecule of Glyceraldehyde 3phosphate, 2 high energy ATP are produced for one molecule of glucose.

Phosphocreatine is a phosphogen and it interacts with ADP to form ATP. When ATP is more creatine reacts with ATP and forms phosphocreatine. The enzyme involved is creatine kinase. This energy transfer from creatine phosphate to ADP helps to produce ATP molecule to provide energy during muscle contraction.

ATP is the most widely distributed high-energy compound within the human body. Adenosine triphosphate (ATP) is a useful free-energy currency because the dephosphorylation reaction or hydrolysis, yield an unusually large amount of energy; i.e., it releases a large amount of free energy. “High energy” bonds are often represented by the “~” symbol (squiggle), with~P representing a phosphate group with a high free energy on hydrolysis. The terminal phosphate group is then transferred by hydrolysis to another compound, a process called phosphorylation, producing ADP, phosphorylated new compound and energy.Thus,the dephosphorylation reaction of ATP to ADP and inorganic phosphate is often coupled with non spontaneous reactions. Generally, ATP is connected to another reaction—a process called coupling which means the two reactions occur at the same time and at the same place, usually utilizing the same enzyme complex. Release of phosphate from ATP is exothermic (a reaction that gives off heat) and this reaction is connected to an endothermic reaction (requires energy input in order to occur). The free energy yielded can be coupled to endothermic reaction and useful for the works such as:

Chemical work: ATP energy is consumed to synthesize macromolecules that makeup the cell.

Transport work: ATP energy is utilized to pump substances across the plasmamembrane.

Mechanical work: ATP provides energy to contract the muscles of the body.

Some time the phosphate group can be transferred to an acceptor molecule and such group transfer potential are associated with some high energy compound. Thus, ATP act as a common intermediate that serves as a vehicle for transfer of chemical energy.

ATP is an abbreviation for adenosine triphosphate, a complex molecule that contains the nucleoside adenosine, ribose and a tail consisting of three phosphates. 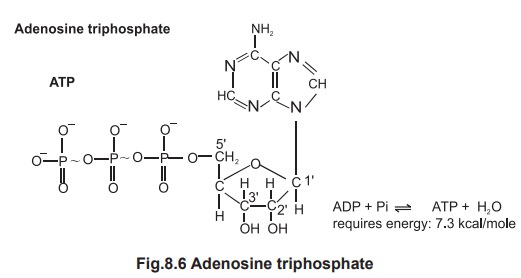 2.2 Free energy of hydrolysis of ATP

ATP is sometimes referred to as a “High Energy” compound. High energy in this case does not refer to total energy in compound, rather just to energy of hydrolysis. Thus ATP has a larger negative DG for hydrolysis. For biochemistry HighEnergy is defined in terms of ATP: if a compound’s free energy for hydrolysis isequal to or greater than ATP’s then it is “High Energy,” if its free energy of hydrolysis is less than ATP’s then it is not a “high energy” compound. Note that ATP has two high energy anhydride bonds (AMP ~P~P). DG of ATP hydrolysis also depends on the local environments it varies with pH, divalent metal ion concentration, ionic strength and Consumption of ATP. An EATP of -7.3 kcal /mol requires ATP, ADP and phosphate to be present at equal concentrations. In cells, however the concentration of ATP is often 5 to 10 times that of ADP.

As a result, the free energy of ATP hydrolysis is about -12 kcal / mol. One must be clear that the bond energy generally meant by physical chemist is the energy required to break a covalent bond between two atoms. Since relatively a large amount of energy is required to break a covalent bond, the phosphate bond energy is totally a different one. Phosphate bond energy specifically denotes the difference in the free energy of the reactants when phosphorylated compound undergoes hydrolysis.

Pyrophosphate (PPi) is often the product of a reaction that needs a drivingforce. Its spontaneous hydrolysis, catalyzed by Pyrophosphatase enzyme, drives the reaction for which PPi is a substrate. The DG (free energy) for this pyrophosphate cleavage is 10.0 Kcal./mol and thus an extra thermodynamic push is given to certain enzymatic reaction which require more energy than that of a mono phosphate cleavage and assure the completeness of certain biosynthetic reactions