The electron transport chain (figure 8.2) consists of series of proteins which tightly bound involves the passage of a pair of electrons from one chemical to the next, whereby each chemical in the sequence has less reduced energy than the previous.

1.  Components of mitochondria with marker enzymes

The histochemical and ultra centrifugation studies clearly established that the major site of cellular oxidation is mitochondria. These are sub cellular organelles and quite vary in size and shape. Ellipsoidal, spherical or rod shaped structures measuring about 0.5-5 μ in length and 0.1-0.6μ in width. Since, the energy released in the oxidation process is converted into chemical energy (ATP). Mitochondria otherwise called as power house of the cell. Hence the number of mitochondria in a cell depends onit’s metabolic activity. All the reducing equivalence that can release energy during oxidation of carbohydrates, fatty acids and proteins are available in the mitochondria. In mitochondria, a series of catalysts referred as respiratory chain that collects these reducing equivalents and direct them towards oxygen to form water.

The structure of mitochondria ( figure 8.3 ) and the location of various essential enzymes are given in the form of diagram. Since these enzymes 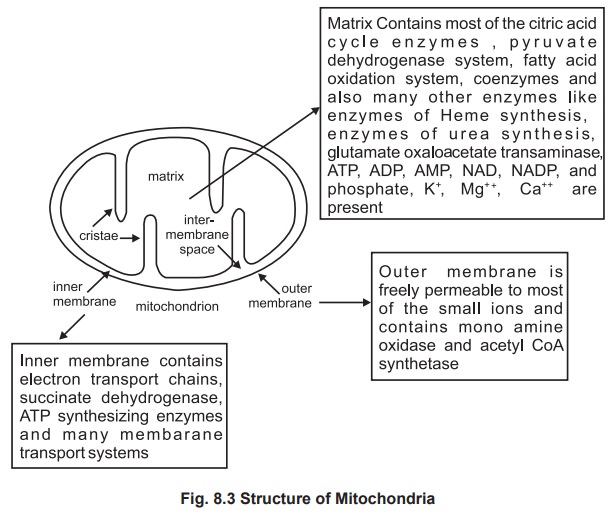 2. Members of the electron transport chain

Complex I - NADH dehydrogenase, also called NADH coenzyme Q reductaselocated in the inner mitochondrial membrane and also contains non heme iron atoms. These dehydrogenase enzyme does not react with oxygen instead an electron carrier is interposed between the metabolite and next member in the chain. These enzymes consist of a protein part and a non protein part which is a coenzyme. The co enzyme NAD+ or NADP+ are utilized as the prime carriers of hydrogen.

Complex II - Coenzyme Q (Q for Quinone) or cytochrome c reductase is a Ubiquinone.It is in the inner membrane in the free form or protein bound form. Coenzyme Q occupies the position between metalloflavoproteins and cytochrome in the chain. At the point of coenzyme the H+ ion dissociate and go into solution, leaving the electrons to the cytochromes .

Complex III -Cytochrome c oxidase. Cytochromes are very similar to the structure ofmyoglobin or hemoglobin. The significant feature is the heme structure containing the iron (Fe) ions, initially in the +3 state and changed to the +2 state by the addition of an electron. Cytochrome molecules accept only the electron from each hydrogen, not the entire atom. The several types of cytochromes hold electrons at slightly different energy levels. Electrons are passed along from one cytochrome to the next in the chain, losing energy as they go. Finally, the last cytochrome in the chain, cytochrome a3, passes two electrons to molecular oxygen. These cytochromes are proteins that carry a prosthetic group that has an embedded metal atom. The protein ‘steals’ the ability of the metal atom to accept and release electrons.

Complex IV - ATP synthase, also known as the F0F1particle has two componentsF0 and F1 (F - indicates the factor). F1 protruding into matrix from the inner membrane and F0 embedded and extend across the inner membrane. The protruding F1 is essential for the energy coupling to ATP molecule. Careful removal of this component (experimentally) leads to impairment in ATP production though the intact respiratory chain is present.

The electron acceptors in the electron transport chain include FMN, ubiquinone (coQ), and a group of closely related proteins called cytochromes. The figure 8.4 shows arrangement of the protein

The coupled oxidation/reduction reaction is

This coupled reactions yield free energy NADH+H+ yields 52 Kcal/mole as the electrons from NADH+H+ transfer to oxygen consist of three pumps yield 3 ATP molecule at 3 sites FADH2 yields 36 Kcal/mole as the electron from FADH2 transfer to oxygen there are two pumps yield 2 ATP molecule at 2 sites. The position at which the energy capture occurring as ATP are given in figure 8.5.

Spontaneous flow of electrons through each of the respiratory chain complexes I, III, & IV is coupled to ejection of H+ from the mitochondrial matrix to inner membrane space. The ejection of proton gradient is done through inner membrane protein, ATPase that uses released energy to drive the synthesis of ATP from ADP. The terminal acceptor of electrons is molecular oxygen and it is reduced to water. However not all the energy released are captured as high energy phosphate bond and liberated as heat. In warm blooded animals this heat is used for the maintenance of body temperature. The important respiratory control of electron transport chainis the availability of ADP, the substrate for the ATP Synthase.

a. Inhibitors that arrest respiration are barbiturates like amobarbital, antibioticlike piericidin A , antimycin A and fish poison retinone. The carbon monoxideand cyanide inhibit cytochrome oxidase so that it cannot transport electronsto oxygen. This blocks the further passage of electrons through the chain, halting ATP production and life.

b. Inhibitors of oxidative phosphorylation are oligomycin and atrctyloside.

c. Uncouplers dissolve in the membrane, and function as carriers for H+ or it can be an ionophores. Uncouplers block oxidative phosphorylation by dissipatingthe H+ electro chemical gradient by an un coupling the essential linkage between electron transport and ATP synthesis. Un couplers are 2,4 dinitro phenol, dinitrocresol, pentacholophenol.

Ionophores (ion carriers) are lipid soluble substance capable of carrying specificions through the membrane. They slightly differ in their action from the uncouplers as they also transport cation other than H+ through the membrane. Valiomycin forms a lipid complex through which the K+ ion readily pass through. The ionophore gramicidin induces penetration to H+, K+ or Na+ and uncouples the oxidative phosphorylation.