Hepatitis B virus is an enveloped DNA virus belonging to the family Hepadnaviridae.

Hepatitis B virus is an enveloped DNA virus belonging to the family Hepadnaviridae. It is unrelated to any other human virus; however, related hepatotropic agents have been identified in woodchucks, ground squirrels, and kangaroos. A schematic of the hepatitis B virus is illustrated in Figure 37–2. The complete virion is a 42-nm, spherical particle that consists of an envelope around a 27-nm core. The core comprises a nucleocapsid that contains the DNA genome. 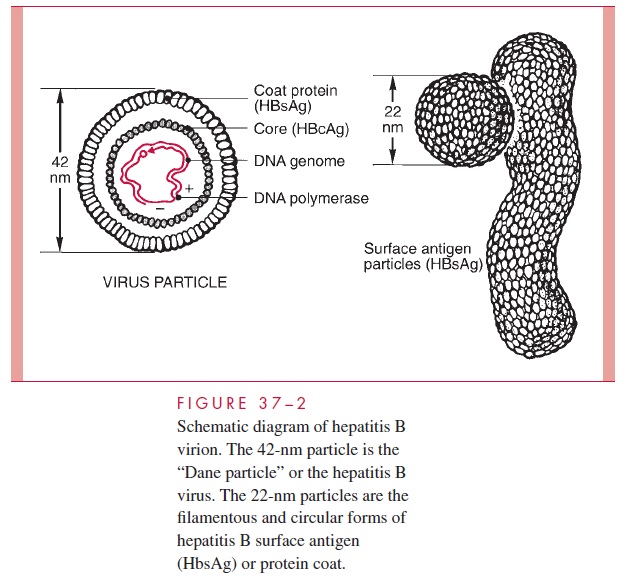 The viral genome consists of partially double-stranded DNA with a short, single-stranded piece. It comprises 3200 nucleotides, making it the smallest DNA virus known. Closely associated with the viral DNA is a DNA polymerase. Other components of the core are a hepatitis B core antigen (HBcAg) and the hepatitis B e antigen (HBeAg), which is a low-molecular-weight glycoprotein.

The envelope of the virus contains the hepatitis B surface antigen (HBsAg), which is composed of one major and two other proteins. Antigenically there exist a group-specific determinant, termed a, and a number of subtypes that are important in epidemiologic typ-ing, but not in immunity, because there is antigenic cross-reactivity and cross-protection between subtypes.

Aggregates of HBsAg are often found in great abundance in serum during infection. They may assume spherical or filamentous shapes with a mean diameter of 22 nm and may contain portions of the nucleocapsid (see Fig 37–2). Hepatitis B DNA can also be detected in serum and is an indication that infectious virions are present there. In infected liver tissue, evidence of HBcAg, HBeAg, and hepatitis B DNA is found in the nuclei of infected hepatocytes, whereas HBsAg is found in cytoplasm.

The replication of hepatitis B virus involves a reverse transcription step, and, as such, is unique among DNA viruses. The double-stranded DNA is organized as two strands. One, a short strand, is associated with the viral DNA polymerase and is of positive polarity. The complete or long strand is complementary and thus of negative polarity. In viral replication, full-length positive viral RNA transcripts are inserted into maturing core par-ticles late in the replicative cycle. These mRNA strands form a template for a reverse transcription step in which negatively stranded DNA is synthesized. The RNA template strands are then degraded by ribonuclease activity. A positive-stranded DNA is then syn-thesized, although this is not completed prior to virus maturation and release and thus results in the variable-length short positive DNA strands found in the virions.

Despite extensive attempts, hepatitis B virus has not been propagated in the labora-tory. Humans appear to be the major host; however, as with hepatitis A, infection of sub-human primates has been accomplished experimentally.