Hemolytic disease of the newborn, also known as HDN, is an alloimmune condition. It develops in a fetus, which contains the IgG antibodies that have been produced by the mother and have passed through the placenta.

Hemolytic disease of the newborn, also known as HDN, is an alloimmune condition. It develops in a fetus, which contains the IgG antibodies that have been produced by the mother and have passed through the placenta. These antibodies subsequently attack and lyse the red blood cells in the fetal circulation, result-ing in reticulocytosis and anemia. This condition in fetus varies from mild to very severe, and fetal death may occur due to heart failure (hydrops fetalis). When the disease is moderate or severe, many erythroblasts are present in the fetal blood, and this form of the disease is called erythroblastosis fetalis.

Immunological destruction of fetal and/or newborn eryth-rocytes is likely to occur when IgG antibodies are present in the maternal circulation directed against the antigen(s) present on the fetal red blood cells. This is because only IgG antibodies can cross the placenta and reach the fetal circulation. Anti-D and anti-A or anti-B are the two types of antibodies most usually involved in hemolytic disease of the newborn. Anti-A or anti-B antibodies are usually IgM, but, in some circumstances, IgG antibodies may develop (usually in group O mothers). This can be secondary to immune stimulation (some vaccines contain blood group substances or cross-reactive polysaccharides), or may occur without apparent cause for unknown reasons.

Antibodies are produced when the body is exposed to an antigen foreign to the make-up of the body. If a mother is exposed to an alien antigen and produces IgG (as opposed to IgM which does not cross the placenta), the IgG will com-bine with the antigen, if present in the fetus, and may affect it in utero and persist after delivery (Fig. 22-2). 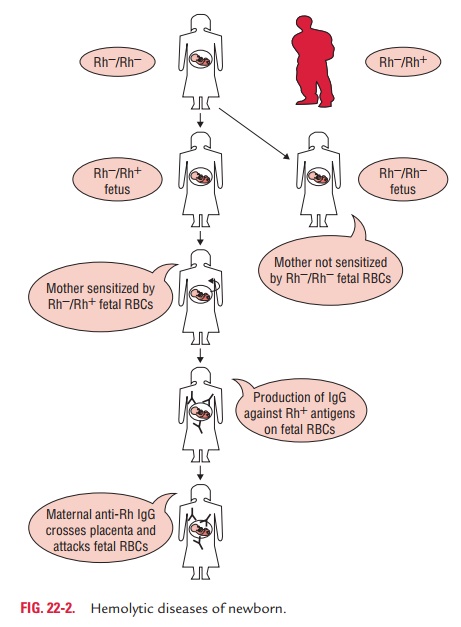 The three most common ways in which a woman becomes sensitized (i.e., produces IgG antibodies against) toward particular blood types are as follows:

i.               Fetal–maternal hemorrhage can occur due to trauma, abortion, childbirth, ruptures in the placenta during preg-nancy, or medical procedures carried out during pregnancy that breach the uterine wall. In subsequent pregnancies, if there is a similar incompatibility in the fetus, these anti-bodies then cross the placenta into the fetal bloodstream, combine with the red blood cells, and finally cause hemo-lysis. In other words, if a mother has anti-RhD (D being the major Rh antigen) IgG antibodies as a result of previously carrying an RhD-positive fetus, these antibodies will only affect a fetus with RhD-positive blood.

iii.               The third sensitization model can occur in women of blood type O. The immune response to A and B antigens, which are widespread in the environment, usually leads to the production of IgM anti-A and IgM anti-B antibodies early in life. On rare occasions, IgG antibodies are produced. In contrast, Rhesus antibodies are generally not produced from exposure to environmental antigens.

A positive direct Coombs’ (antiglobulin) test with cord RBC is invariably positive in cases of Rh incompatibility. In ABO incompatibility, the direct antiglobulin test is usually weakly positive and may be confirmed by eluting antibodies from the infant’s red cells and testing the elute with A and B cells.

Before birth, treatment of the condition include intrauter-ine transfusion or early induction of labor when (a) pulmo-nary maturity has been attained, (b) fetal distress is present, or (c) 35–37 weeks of gestation have passed. The mother is also administered with plasma to reduce the circulating levels of antibody by as much as 75%.

After birth, treatment depends on the severity of the condi-tion. These include temperature stabilization, phototherapy, transfusion with compatible packed red blood cells, admin-istration of sodium bicarbonate for correction of acidosis, and/or assisted ventilation and exchange transfusion with a blood cells, type compatible with both the infant and the mother.

Rh-negative mothers who have had a pregnancy with or are pregnant with an Rh-positive infant are given Rh immuno-globulin (RhIG) during pregnancy and after delivery to prevent sensitization to the D antigen. The RhIG acts by binding any fetal red cells with the D antigen before the mother is able to produce an immune response and form anti-D IgG.

All the offsprings of Rh-incompatible marriages, however, do not suffer from hemolytic diseases of newborn. This may be due to either of the following causes:

i.         Mother–fetus ABO incompatibility: When the motherand fetus possess the same ABO group, Rh immunization is more likely to occur. However, when Rh and ABO incompat-ibility coexist, Rh sensitization from the mother is very rare. In this condition, the fetal cells entering the maternal circulation are destroyed rapidly by the ABO antibodies before they can form the Rh antibodies.

ii.         Immune unresponsiveness to Rh antigen: SomeRh-negative individuals even after repeated injections of Rh-positive cells fail to form Rh antibodies. Such individuals are known as nonresponders. The exact reason for such immu-nological unresponsiveness, however, is not known.

iii.               Number of pregnancies: The risk of hemolytic disease ofnew born is more in second and successive child, but not in first child. This is because sensitization occurs only during the delivery; hence the first child escapes.