Harvesting and marketing of Eels

Eel culture as practised in most areas involves partial harvesting and stocking at regular intervals.

Eel culture as practised in most areas involves partial harvesting and stocking at regular intervals. For thinning of stocks or capture of marketable eels, a scoop net is generally used in the feeding area, where the fish congregate at the usual feeding time. The day before harvesting feeding is stopped, so that on the day of harvesting the eels readily gather at the feeding spot. During fishing, fresh water is let in toavoid a reduction in oxygen levels. At times when eels fail to assemble in large numbers due to poor water conditions, a seine net with a fine-meshed bag at the centre is used. The seine is dragged from the deeper part of the pond towards the inlet, and finally the catch is removed by small dip nets. Seining is repeated two or three times and this helps to aerate the pond. Often fresh water is added to the pond through a hose, or a water mill is operated to replenish oxygen. This type of harvesting is performed in Japan in the summer months.

Complete harvesting in winter months is carried out by draining the ponds. Draining is done on warm and windless days. If the draining is done in the morning, most of the eels will not burrow into the bottom soil and will swim out with the water flow. A few eels buried in the mud can be stirred out using a T-shaped wooden scraper. If many eels still remain, the ponds are partially refilled and drained again during the night, when the eels will swim out with the drained water. After all the eels are caught, the pond bottom is treated with lime and stirred several times before being allowed to dry.

Sorting the catches is done soon after harvest. Smaller ones (below about 120 g weight) are generally used for further rearing if caught in summer or, if caught in winter, are kept for overwintering and rearing during the following year. Larger sizes are sorted according to the size preferred in the markets (fig. 19.5). European markets prefer larger fish, above 250 g, but eels of this size are generally not eaten in Japan and so are exported to Europe. Eels of 120–150 g and 160–250 g are the preferred sizes in Japan, but the size preference varies according to the region. Taiwanese producers reserve these size groups for the Japanese market. 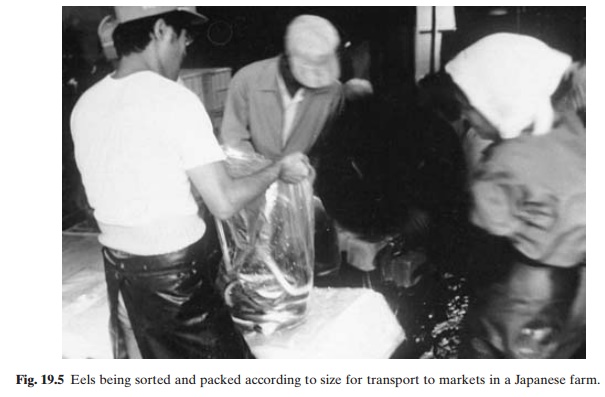 Before shipment of live eels, they are starved for a few days and kept confined in a limited space. This is meant to reduce the accumulation of fat and destroy any off-flavour they may have acquired. Besides this, the eels become conditioned to the lower levels of oxygen required for safe shipment. The starvation period ensures more sanitary conditions in the containers in which the eels are transported.

The most common method of conditioning used now is to stack up a number of baskets containing about 3 kg eels each and provide a shower of water from above the stack for three to four days. Elvers for transport are also acclimatized in the same manner, but the containers are made of fine-mesh screens and can hold a higher weight of about 5 kg in each container. The conditioning of elvers lasts only for half to one day.

Eels are shipped to markets alive in ordinary vinyl bags, each containing about 10 kg with about 1 kg ice, for short journeys. For longer journeys by train or truck, the eels can be packed in double-polythene boxes filled with ice and oxygen. Aerated tanker lorries are also used for the transport of live eels taking up to one week. Many of these lorries can carry 15 tons of live eels in about 15 tons of water, with continuous aeration by a compressor. If the water is changed every four days, they can be transported this way for up to two weeks.

Dead eels are generally quick-frozen and glazed for transport. Eels are frozen either whole or after gutting and cleaning, in blocks in a plate-freezer or in an air-blast. Storing is done at -20°C. Each eel or block of frozen eels is glazed to prevent oxidation, which causes rancidity in eels with a high fat content. The glazed eels or blocks are wrapped in polyethylene and sealed. At -20°C, frozen eels can be kept in good condition for about six months.

There are speciality markets for smoked eels in many countries. Eels are generally hot-smoked after gutting, cleaning and brining for about 10 minutes. First they are smoked in smoking kilns for about an hour at 35°C, then for about half an hour at 50°C and finally for one hour at 73°C. This gradual increase in temperature is to enable uniform drying. The smoked product is allowed to cool before packing, to prevent the formation of moulds. Since the eels are cooked during the smoking process, they are ready to eat and the shelf life is about three to four days. The smoked eels can also be canned in vegetable oils, processed at a temperature of about 102°C.