Diseases and mortality of Eels

Eels appear to be comparatively more prone to diseases and resultant mortality than many other aquaculture species.

Eels appear to be comparatively more prone to diseases and resultant mortality than many other aquaculture species. Unstable temperature conditions, accumulation of uneaten feed and decayed algal blooms are direct or indirect causes of mortality of elvers and adult eels. Despite their ability to breathe atmospheric air, they seem to be very susceptible to low dissolved oxygen concentrations in stagnant ponds. Fluctuations in temperature affect their feeding activity very considerably and reduce resistance to disease. Susceptibility to disease also seems to be accelerated by over-wintering practices. The above factors contribute to the incidence of high mortality in eel farms.

Fungal infection or the cotton cap disease, as it is called in Japan, is a common cause of mortality in Japanese ponds. It has been demonstrated that the fungal infection is only a secondary condition and the primary cause of the disease is a pathogenic bacterium. The disease is recognized in spring and autumn, at temperatures between 15 and 20°C. White patches of Saprolegnia develop and spread on the bodies, and within a week or two large numbers of eels die. This disease usually appears several days after the first feeding in spring, when the weather conditions are unstable, or when some of the stock were already infected during winter. Increased stock density

(due to stocking of additional eels in the late autumn) and low or very high pH of the water (below 6 or above 10) appear to be conducive to infection and high mortalities. According to Honma (1971), feeding with medicated feeds containing furazolidon or thiazine for about a month after the start of feeding reduces the mortality rate to a considerable extent.

The red disease of pondcultured eels affects elvers as well as adult eels. In the Japanese eel it occurs mostly in temperatures of about 28°C in summer, but can occur also in spring.

In the past the disease was thought to be caused by Aeromonas punctata (= hydrophila) or Paracolobactrum anguillimortiferum or a combination of the two (Hoshina, 1962). From later investigations (Egusa, 1976), however, it was shown that the disease is actually

The causative agent of the red disease infecting European eels has been identified as the bacterium Vibrio anguillarum, which is a common pathogen of many marine fishes. The red spot disease caused by Pseudomonasanguilliseptica has been observed in Japaneseeel ponds. It is characterized by sub-epidermal petechiae on the body surface. The occurrence of large numbers of relatively long rods in the bloodstream in advanced stages is another characteristic. The optimum temperature for the growth of the bacterium infecting European eels is 15–25°C. The disease generally occurs from spring to early summer and secondarily in the autumn, when the pond water has a temperature of about 20°C, and ceases when the temperature exceeds 25°C. The wall tissues of the circulatory organs are inflamed as a result of the infection and this leads to systemic haemorrhage. Recent studies seem to show that this disease is confined to brackish-water ponds and outbreaks occur when the water temperature is less than 26°C.

The white spot disease caused by parasitic sporozoa-like species of Pleistophora, Myxid-ium and Myxobolus often causes much damageto elvers and sometimes to adult eels. The affected eels become thin, and in elvers the body becomes black and the pigmentation disappears in patches. They swim vertically up and down in the surface layer of the pond. The maximum infection occurs in the kidneys and muscles. As no suitable cure has been developed, it is important to remove infected fish

and destroy them to prevent the spread of the infection.

The bubble disease or gas embolism is a common disease of elvers. Bubble-like tumours occur, especially in the head region, due to excessive oxygen or nitrogen in the water. Sometimes the gas may accumulate in the muscles or even in the blood vessels, blocking blood circulation and causing death. Usually the disease is controlled by the introduction of clean water with a lower gas content and lower temperature. If the water supply is high in nitrogen, as in the case of ground water, aeration can be of help.

The crustacean parasite Argulus giordani has caused large-scale mortality of eels in Italian vallis, which, in some areas has even led to a complete cessation of eel culture. Infection by the anchor worm Lernaea cyprinacea has been an important cause of mortality in eel ponds in Japan, but due to preventive and curative measures now available it is no longer a major problem.

Branchionephritis or branchial kidney disease has been identified in recent years, the cause of which has not yet been determined. The disease has been responsible for considerable losses in eel farms in Japan. The skin of the gill lamella swells, causing adhesion, and the inflamed kidney shown signs of bleeding. It would appear that the salt metabolism is impeded as a result of dehydration caused by the histological hindrance and consequent high density of the blood and drop in salt concentration. Release of the diseased fish in salt water containing 0.4–1.0 per cent sodium chloride has been found to reduce mortality.

Among other diseases reported to occur in eel farms are gill erosion, caused by bacteria, and ich, caused by Ichthyophthirius multifiliis. 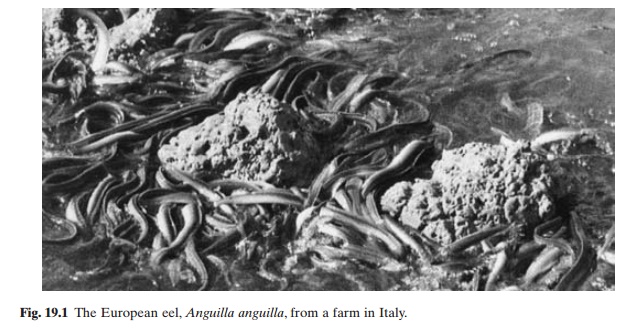