Multithreading allows multiple threads to share the functional units of a single processor in an overlapping fashion.

Exploiting Thread-Level Parallelism within a Processor.

·        Multithreading allows multiple threads to share the functional units of a single processor in an overlapping fashion.

·        To permit this sharing, the processor must duplicate the independent state of each thread.

There are two main approaches to multithreading.

1.     Fine-grained multithreading switches between threads on each instruction, causing the execution of multiples threads to be interleaved. This interleaving is often done in a round-robin fashion, skipping any threads that are stalled at that time.

·        Simultaneous multithreading (SMT) is a variation on multithreading that uses the resources of a multiple issue, dynamically-scheduled processor to exploit TLP at the same time it exploits ILP.

·        The key insight that motivates SMT is that modern multiple-issue processors often have more functional unit parallelism available than a single thread can effectively use.

The following figure illustrates the differences in a processor’s ability to exploit the resources of a superscalar for the following processor configurations:

·        a superscalar with no multithreading support,

·        a superscalar with coarse-grained multithreading,

·        a superscalar with fine-grained multithreading, and

·        a superscalar with simultaneous multithreading.

·        In the superscalar without multithreading support, the use of issue slots is limited by a lack of ILP.

·        In the coarse-grained multithreaded superscalar, the long stalls are partially hidden by switching to another thread that uses the resources of the processor.

·        The above figure greatly simplifies the real operation of these processors it does illustrate the potential performance advantages of multithreading in general and SMT in particular.

Ø A multi-core processor is a processing system composed of two or more independent cores (or CPUs). The cores are typically integrated onto a single integrated circuit die (known as a chip multiprocessor or CMP), or they may be integrated onto multiple dies in a single chip package.

Ø A many-core processor is one in which the number of cores is large enough that traditional multi-processor techniques are no longer efficient - this threshold is somewhere in the range of several tens of cores - and likely requires a network on chip.

Ø A multi-core processor implements multiprocessing in a single physical package. Cores in a multi-core device may be coupled together tightly or loosely. For example, cores may or may not share caches, and they may implement message passing or shared memory inter-core communication methods. Common network topologies to interconnect cores include: bus, ring, 2-dimentional mesh, and crossbar.

Ø The amount of performance gained by the use of a multi-core processor is strongly dependent on the software algorithms and implementation.

Ø Companies that have produced or are working on multi-core products include AMD, ARM, Broadcom, Intel, and VIA.

Ø with a shared on-chip cache memory, communication events can be reduced to just a handful of processor cycles.

Ø therefore with low latencies, communication delays have a much smaller impact on overall performance.

Ø threads can also be much smaller and still be effective 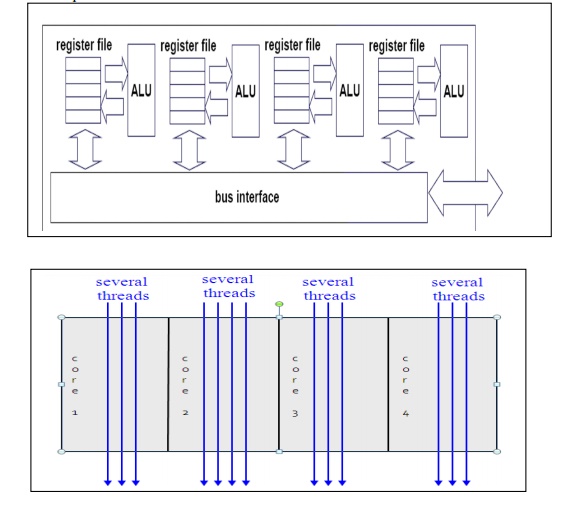 ¡  Cores will be shared with a wide range of other applications dynamically.

¡  Load can no longer be considered symmetric across the cores.

¡  Cores will likely not be asymmetric as accelerators become common for scientific hardware.

¡  Source code will often be unavailable, preventing compilation against the specific hardware configuration.

Applications that benefit from multi-core