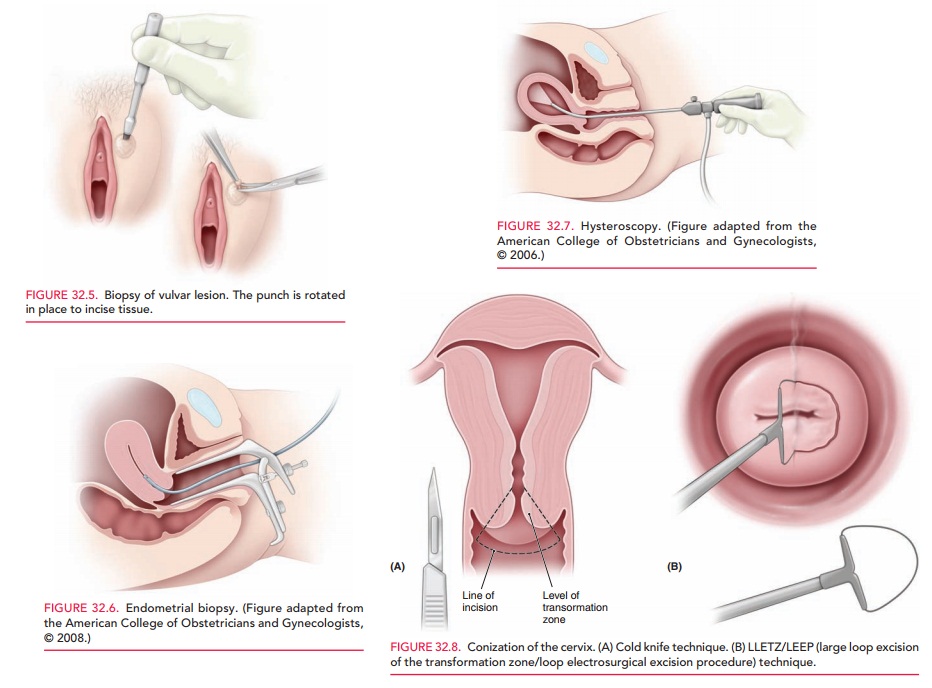 Gynecologic procedures include diagnostic procedures such as biopsy and colposcopy, as well as procedures used as treatment modalities. Some procedures, such as laparoscopy and hysteroscopy, can be performed for both diagnosis and treatment and are chosen specifically for this reason.

Biopsies of the vulva, vagina, cervix, and endometrium are frequently necessary in gynecology. These proce-dures are usually comfortably performed in the office; they require either no anesthesia or local anesthesia.

Vulvar biopsies are performed to evaluate visible lesions, persistent pruritus, burning, or pain. A circular, hollow metal instrument 3–5 mm in diameter, called a punch, is used to remove a small disk of tissue for evaluation (Fig. 32.5). For hemostasis, local pressure or anticoagulants (styptics) such as Monsel solution (ferric subsulfate) or silver nitrate sticks are often used. Sutures are rarely nec-essary. Local anesthesia is required for this type of biopsy. 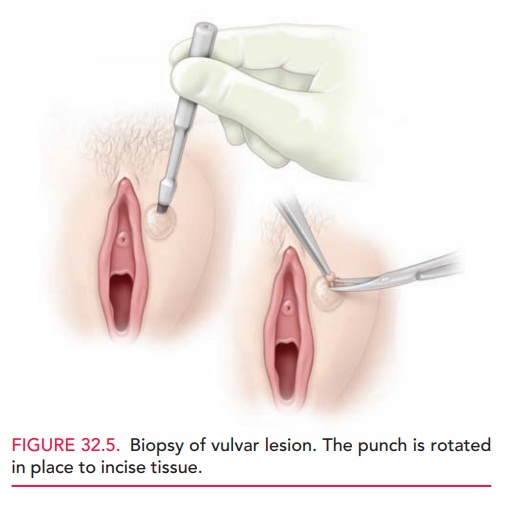 Cervical biopsy is performed with biopsy forcepsand, perhaps, a colposcope . No anesthesia is necessary. Indications for cervical biopsy include chronic cervicitis, suspected neoplasm, or ulcer.

Endometrial biopsy (EMB) is generally used toevaluate abnormal uterine bleeding, such as menorrhagia, metrorrhagia, or menometrorrhagia. EMB is accomplished with a small-diameter catheter with a mild suction mecha-nism (Fig. 32.6). Various types are available. Anesthesia is not necessary, but many patients are more tolerant of EMB when given ibuprofen (400–800 mg) 1 hour prior to the procedure. 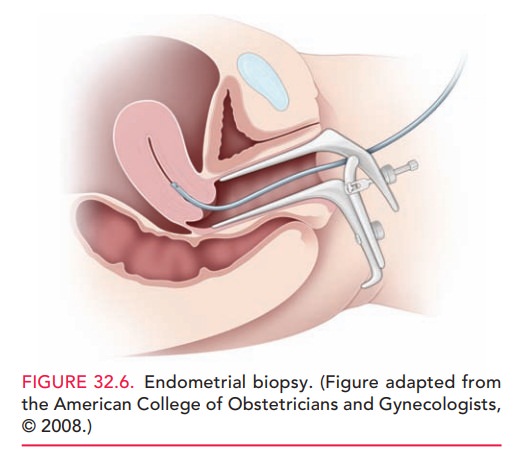 Colposcopy is performed to evaluate abnormal Pap results.It facilitates detailed evaluation of the surface of the cervix, vagina, and vulva when premalignancy or malignancy is suspected based on history, physical examination, or cytol-ogy. Cervical biopsy of suspicious lesions is frequently performed during colposcopy.

Cryotherapy is a technique that destroys tissue by freez-ing. A hollow metal probe (cryoprobe) is placed on the tis-sue to be treated. The probe is then filled with a refrig-erant gas (nitrous oxide or carbon dioxide) that causes it to cool to an extremely low temperature (between −65 and −85 degrees C), freezing the tissue with which the cryoprobe is in contact. Cryotherapy is most often used to treat cervical intraepithelial neoplasia and other benign lesions such as condyloma. The formation of ice crystals within the cells of the treated tissue leads to tissue destruction and subsequent sloughing. Patients who have had cryotherapy of the cervix can expect to have a watery discharge for several weeks as the tissues slough and healing occurs. Although cryotherapy is inexpensive, well-tolerated, and generally effective, it is less precise than other methods of tissue destruction, such as laser ablation or electrosurgery.

Highly energetic coherent light beams (light amplification by stimulated emission of radiation [LASER]) may be directed onto tissues, facilitating tissue destruction or inci-sion, depending on the specific wavelength of light used and the power density of the beam. Infrared (CO2) is the most common type of laser used in gynecologic pro-cedures. Yttrium-aluminum-garnet (YAG), argon, or potassium-titanyl-phosphate (KTP) lasers, all of which have different effects on tissues, are also used. Some can be used in the presence of saline or water. The type of laser is selected according to the indication or desired effect of the surgery. Although expensive, the great pre-cision that laser offers makes it a useful tool in specific clinical settings.

Dilation and curettage (D&C) is a procedure in which the cervix is dilated using a series of graduated dilators, followed by curettage (scraping) of the endometrium, for both diagnos-tic (histologic) and therapeutic reasons. D&C usually is per-formed under anesthesia in the operating room. Some common indications for D&C include abnormal uterine bleeding, incomplete or missed abortion, inability to per-form EMB in the office, postmenopausal bleeding, and sus-pected endometrial polyp(s). With the availability of newer imaging procedures, D&C is now less commonly performed.

Hysteroscopy is the visualization of the endometrial cavity using a narrow telescope-like device (Fig. 32.7) attached to a light source, camera, and distension medium (often normal saline). It is used to view lesions such as polyps, intrauterine adhesions (synechiae), septa, and submu-cous myomas. Special instruments allow directed resec-tion of such abnormalities. Hysteroscopy is commonly performed in the outpatient setting under general anes-thesia; however, it can also be performed in the office as a diagnostic procedure or in conjunction with either endometrial ablation or sonohysterography. 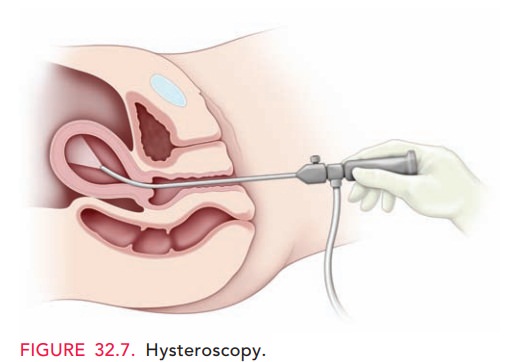 A procedure for nonreversible sterilization has been designed to be used in conjunction with the hysteroscope. In this procedure, metal coils are inserted into the ostium of each fallopian tube under direct visualization. Scarring of the tubal ostia then occurs. To confirm that the tubes are occluded, an HSG must be performed three months later.

Endometrial ablation is used to burn away the uterinelining. The procedure is used to treat abnormal uterine bleeding in women who do not wish to become pregnant. It is not a method of sterilization; therefore, women who undergo ablation must use some other form of birth control. Various ablation devices are available; some use heat, and others use cryotherapy. Some, but not all, of the available techniques involve direct visualization of the endometrium with a hysteroscope. Many women opt for endometrial abla-tion because it is a minor procedure, thus avoiding major surgery in the form of a hysterectomy. The procedure can be performed in either the surgical suite or office. In the office, a combination of nonsteroidal anti-inflammatory drugs, a local anesthetic, and an anxiolytic is used to pro-vide pain relief.

Pregnancy termination refers to the planned interruption of pregnancy before viability and is often referred to as induced abortion. It is generally accomplished surgically through dilation of the cervix and evacuation of the uterine contents, accomplished under local anesthesia. In the first and early second trimester, removal of the products of con-ception uses either a suction or a sharp curette. Suction curettes are often preferred, because they are less likely to cause uterine damage such as endometrial scarring or per-foration. In the second trimester, destructive grasping for-ceps may be used to remove the pregnancy through a dilated cervix (dilation and evacuation [D&E]).

Alternatively, in the first trimester (within 9 weeks of the first day of the last menstrual period), pregnancy can be terminated using medical rather than surgical tech-niques. Medical abortion may be carried out using one of the following methods:

A woman who is still pregnant after an attempted medical abortion needs to have a surgical abortion.

Conization is a surgical procedure in which a cone-shaped sample of tissue, encompassing the entire cervical transfor-mation zone and extending up the endocervical canal, is removed from the cervix (Fig. 32.8). It may be required as the definitive diagnostic procedure in the evaluation of an abnormal Pap test when the colposcopic examination is inadequate, or when colposcopic biopsy findings are incon-sistent with Pap test results. Colposcopy-guided conization may also be used therapeutically in cases of cervical intra-epithelial neoplasia (CIN). Various techniques for coniza-tion are available, including cold knife (scalpel), laser excision, or electrosurgery (loop electrosurgical excision procedure [LEEP], also called large loop excision of the transformation zone [LLETZ]). Laser excision and LEEP are often performed in the office. Long-term complications may include cervical insufficiency and stenosis. 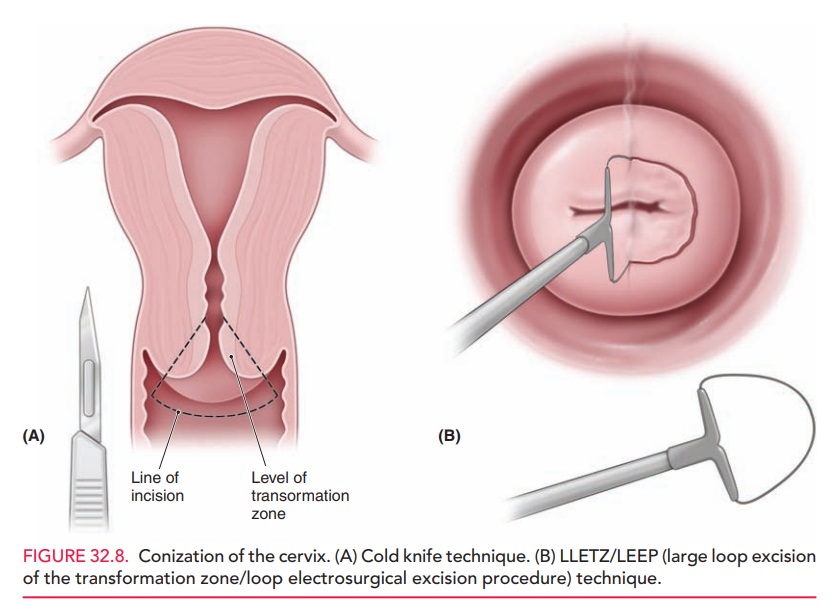 Laparoscopy is the visualization of the pelvis and abdomi-nal cavity using an endoscopic telescope, which is most often placed via an incision in the periumbilical region (Fig. 32.9). The procedure may be diagnostic or thera-peutic. Laparoscopic evaluation and treatment may be performed for conditions such as chronic pelvic pain, endometriosis, infertility, pelvic masses, ectopic pregnan-cies, and congenital abnormalities. Sterilization (bilateral tubal ligation) using techniques such as bipolar cautery, clips, or bands can be accomplished easily via laparoscopy. 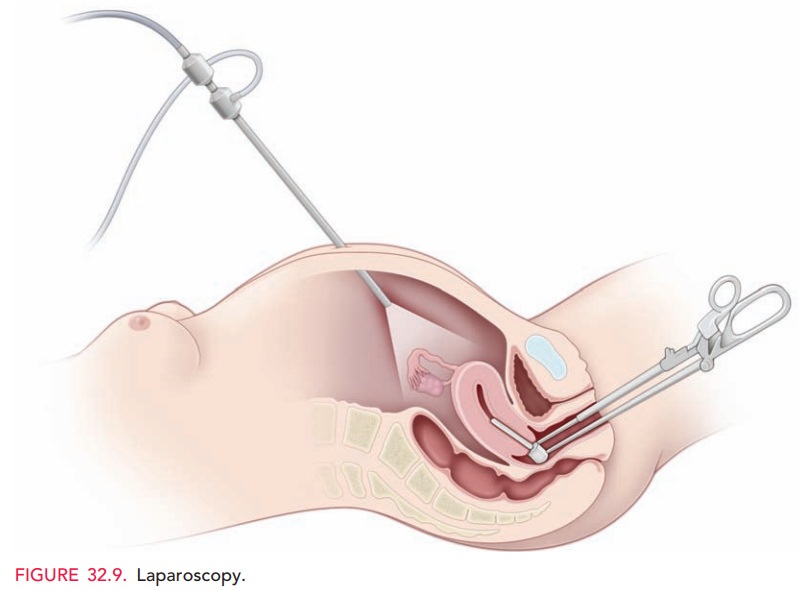 During the procedure, car-bon dioxide is insufflated to distend the peritoneal cavity to provide visualization. Additional instruments with diame-ters of 5–15 mm may be inserted via other laparoscopic incisions. The number, length, and location of incisions depend on the instruments needed and the size of any tis-sue specimens that are to be removed. Transvaginal inser-tion of a uterine manipulator facilitates these maneuvers.

After laparoscopy, the most common complaints in-clude incisional pain and shoulder pain due to referred pain of diaphragmatic irritation from the gas used to provide visualization. Rare, but serious complications include dam-age to major blood vessels, the bowel, and other intra-abdominal or retroperitoneal structures. However, when compared with laparotomy, laparoscopy has several advan-tages, including avoidance of long hospital stays, smaller incisions, quicker recovery, and decreased pain.

Hysterectomy, removal of the uterus, is still one of the most commonly performed surgical procedures. In the United States, more than 500,000 hysterectomies are completed annually. The indications for hysterectomy are numer-ous; they include abnormal uterine bleeding that has not responded to conservative management, pelvic pain, post-partum hemorrhage, symptomatic leiomyomas, symptom-atic uterine prolapse, cervical or uterine cancer, and severe anemia from uterine hemorrhage.

Abdominal hysterectomy is performed via a laparotomy incision. The laparotomy incision can be either trans-verse, usually Pfannenstiel, or vertical. The decision to perform a laparotomy involves many factors—the skill of the surgeon, the size of the uterus, concern for extensive pathology (e.g., endometriosis or cancer), the need to per-form adjunct surgery during the surgery (e.g., lymph node dissection, appendectomy, omentectomy), and previous intra-abdominal scarring or surgeries.

Vaginal hysterectomy is preferred if there is adequate uter-ine mobility (descent of the cervix and uterus toward the introitus), the bony pelvis is of an appropriate configura-tion, the uterus is not too large, and there is no suspected adnexal pathology. In general, vaginal hysterectomy is performed for benign disease. The advantage of vaginal surgery is less pain than with abdominal surgery, quicker return of normal bowel function, and a shorter hospital stay. If indicated, a unilateral or bilateral salpingo-oophorectomy can be performed in conjunction with a vaginal hysterectomy.

Laparoscopic-assisted vaginal hysterectomy (LAVH), with or without a bilateral salpingo-oophorectomy, is often performed for patients who desire minimally invasive surgery and may not have adequate descensus of their uterus to undergo a vaginal hysterectomy. LAVH can be accom-plished by performing most or all of the procedure lapa-roscopically; then the uterus is removed through the vagina. The vaginal cuff can then be sutured transvaginally or laparoscopically.

Many skilled laparoscopic surgeons are now performing a hysterectomy totally via the laparoscopic approach. This is usually accomplished with the assistance of a morcellator, which divides the uterus into multiple smaller specimens that can be removed through the ports. Even large uteri can be safely removed through small incisions.