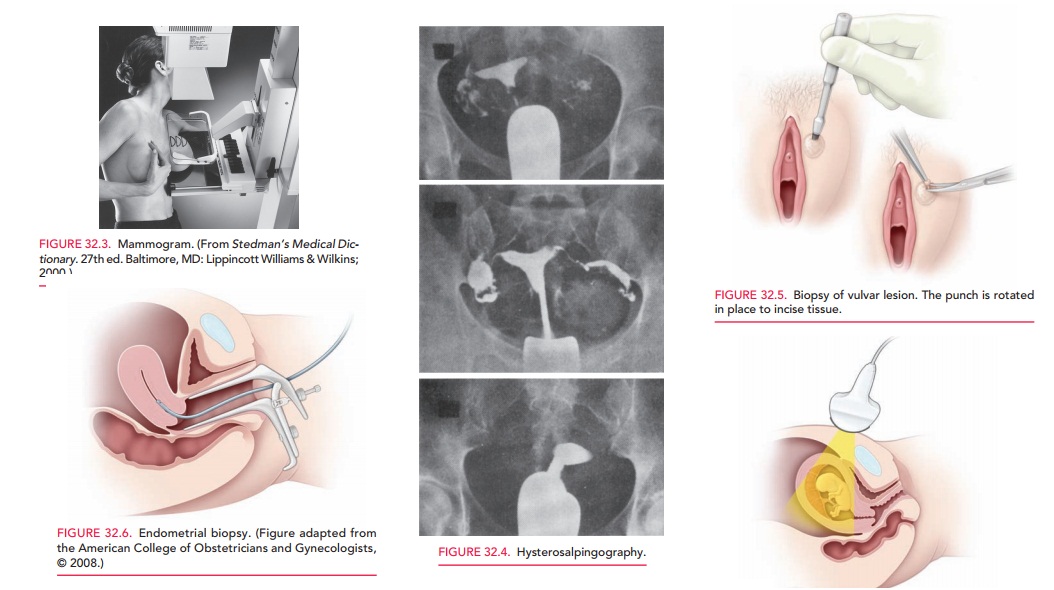 Gynecologic imaging plays an important role in the diag-nostic evaluation of women for a variety of reproductive health conditions.

Gynecologic imaging plays an important role in the diag-nostic evaluation of women for a variety of reproductive health conditions. Although the ability to image various parts and organs of the body has dramatically enhanced clinicians’ diagnostic capabilities, these methods do not replace a careful and thoughtful history and physical eval-uation. However, they can add more detail, which assists in both medical and surgical management. The effective use of these modalities requires that the physician be famil-iar with the benefits and limitations of each method.

Ultrasonography remains the most common modalityfor evaluation of the female pelvis. It uses high-frequency sound reflections to identify different body tissues and structures. Short bursts of low-energy sound waves are sent into the body. When these waves encounter the interface between two tissues that transmit sound differently, some of the sound energy is reflected back toward the sound source. The returning sound waves are detected, and the distance from the sensor is deduced using the elapsed time from transmission to reception. An image is then created and displayed on a monitor. Ultrasonography is safe for preg-nant and nonpregnant patients.

Two kinds of probes are used in ultrasonography: trans-abdominal and transvaginal (Fig. 32.1). A transabdominal probe has an increased depth of penetration, which allows for the assessment of large uterine or adnexal masses. However, in obese patients, it may not allow proper imag-ing of pelvic structures. A transvaginal probe can be placed internally; thus, it often gives improved views of the cervix, uterus, ovaries, and tubes. Also, it has a higher frequency and shorter depth of penetration, which result in enhanced image clarity. 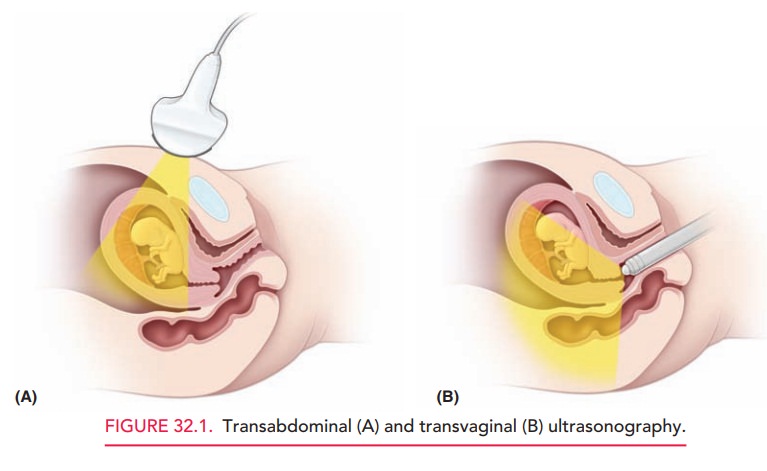 One of the most valuable uses for ultrasonography in gyne-cology is for imaging masses. The imaging technique helps dis-tinguish between cystic and solid adnexal masses. Although magnetic resonance imaging (MRI) or computed tomogra-phy (CT) can also be used for evaluation of ovarian cysts, ultrasonography is far less costly; for this purpose, experts consider it superior to either MRI or CT. It is also possible to delineate leiomyoma (fibroid) size and number using ultrasonography.

Saline infusion during ultrasonography (sonohys-terography, or SHG) can aid in the visualization of theendometrial cavity and can often identify intrauterine polyps or submucosal leiomyomas (Fig. 32.2). In this technique, saline is infused via a transcervically inserted catheter. The saline acts as a contrast agent to delineate the endometrium and intracavity masses. The primary role of SHG is in the diagnosis of the cause of abnormal uterine bleeding (AUB). It is preferred over unenhanced ultrasonography in the evaluation of AUB because of its increased diagnostic accuracy and greater cost-effectiveness. 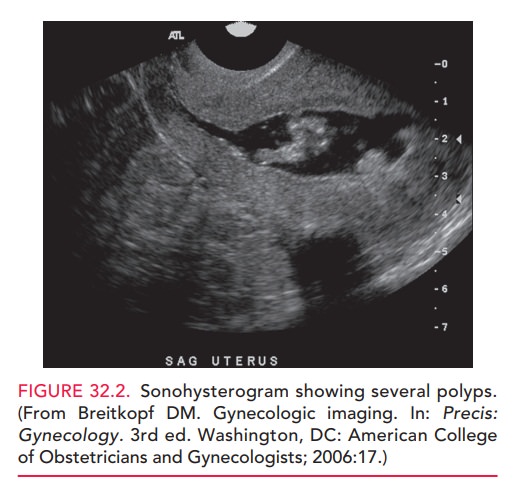 CT involves slightly greater radiation exposure than conventional single-exposure radiograph, but provides significantly more information. The radiation dose of an abdominal CT is still below that thought to cause fetal harm.

Nevertheless, because of CT’s increased risk of fetal effects, magnetic resonance imaging  or ultra-sonography should be used for imaging instead of CT, whenever possible in pregnancy.

Magnetic resonance imaging (MRI) is based on themagnetic characteristics of various atoms and molecules in the body. Because of the variations in chemical composition of body tissues (especially the content of hydrogen, sodium, fluoride, or phosphorus), MRI can distinguish between types of tissues, such as blood and fat. This distinction is useful in visualizing lymph nodes, which are usually sur-rounded by fat; in characterizing adnexal masses; and in locating hemorrhage within organs. MRI is also useful for visualizing the endometrium, myometrium, and cystic structures in the ovaries. Emerging areas of clinical applic-ability include assessment of lesions in the breast and stag-ing of cervical cancer.

Mammography is an x-ray procedure used to screen forbreast cancer. It is performed by passing a small amount of radiation through compressed breast tissue (Fig. 32.3). Because mammography has a high false-positive rate (10% per screening in postmenopausal women and as high as 20% per screening in obese or premenopausal women), additional testing may be required. Digital mammography allows better visualization of dense breast tissue than con-ventional mammography. 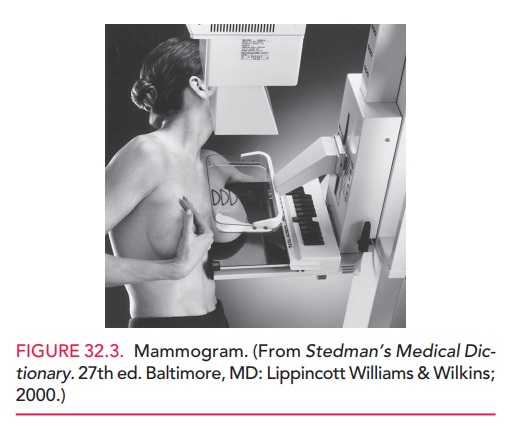 Ultrasonography is also used to evaluate cystic or solid breast masses and guide aspiration of cysts. MRI may also be used as an imaging technique for breast tissue.

Hysterosalpingography (HSG) is most often used toevaluate the patency of the fallopian tubes in women who may be infertile. After a radio-opaque dye is injected trans-cervically, fluoroscopy (live x-ray) is used to determine whether dye spills into the peritoneal cavity (Fig. 32.4). HSG can also be used to define the size and shape of the uterine cavity and to detect developmental abnormalities, such as a unicornuate, septate, or didelphic uterus. It also can demon-strate most endometrial polyps, submucous myomata, or intrauterine adhesions that are significant enough to have important reproductive consequences.