The simplest system of grow-out is by planting in suitable beds. The spat are released from boats during the summer months.

The simplest system of grow-out is by planting in suitable beds. The spat are released from boats during the summer months. The density of spat depends on local conditions, but five or six per m2 is considered suitable for obtaining a commercial size of five or six per kg. The survival rate is only about 25–30 per cent. Even in hanging culture, more widely practised now, the mortality rates are high and so a two-phase system of grow-out has been recommended. In the first phase, the spat are grown in pearl nets or lantern nets on long lines (fig. 28.2) until they develop harder shells. 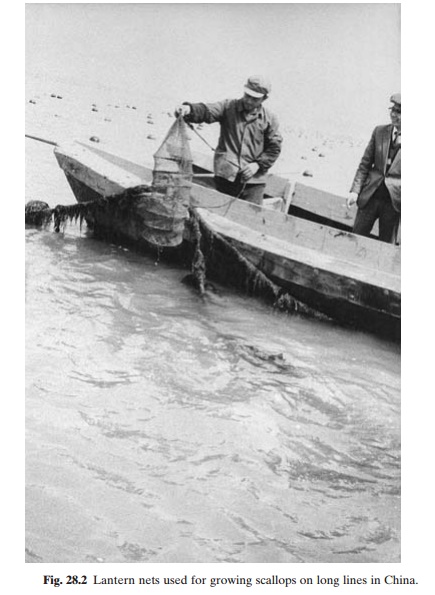 Long lines used for early grow-out are usually longer than those used for spat collection, and may be as long as 200m. Pearl nets hung from the long lines are conical or pyramidal in shape (fig. 28.3), made of small-mesh (2–7mm) net, and provide adequate protection to the spat from predators and silt deposition. Free circulation of water is ensured. The maximum number of spat in each net is about 100 and the nets are hung at 2–12m depth of water. As the growth rate of the spat is rather rapid, the stock has to be thinned out at regular intervals and transferred to new nets. 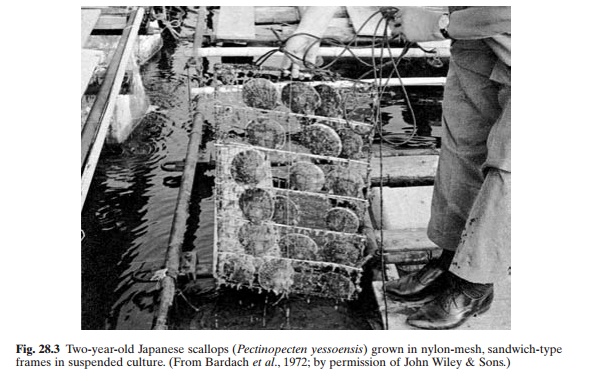 The traditional Japanese method of grow-out to market size consists of hanging seed scallops on long lines, sometimes referred to as the ‘ear hanging’ method. Small holes are drilled on the anterior side of the ear of each seed scallop(about 2mm in size), threaded with nylon and tied to ropes for hanging on long lines (fig. 28.4). 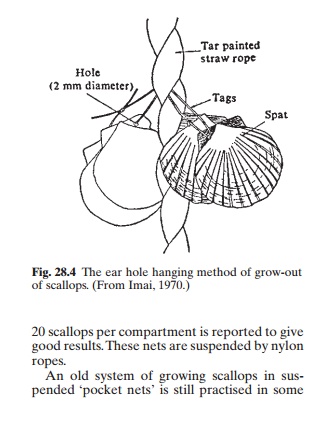 Most modern hanging culture facilities use long-line systems and rafts.

While long lines can be used in shallow inshore areas, as well as offshore deep areas, rafts are only suitable for protected areas. In inshore waters, simple long lines of about 50–60m length are used, whereas more complicated systems of long lines of

100–480m length, with several branch lines, are used in deeper areas. Using such large long-line systems, as many as half a million scallops are reported to be cultured in an area of 9ha in sites exposed to strong wave action and wind during winter months. Spat with hardened shells are placed in lantern nets (known also as Adnon baskets) and hung from the long-line system. The lantern nets are made of mono-filament netting (of about 12–25mm mesh), supported by plastic-coated or galvanized wire hoops of about 50cm diameter which divide the net into several compartments of about 15cm height (fig. 28.5). Each compartment has a lateral opening through which scallops can be introduced or removed. 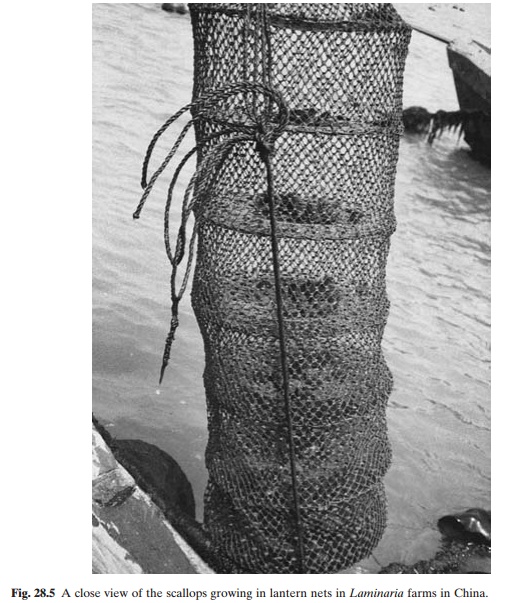 The stocking density determines the growth rate and a density of 20 scallops per compartment is reported to give good results. These nets are suspended by nylon ropes.

An old system of growing scallops in suspended ‘pocket nets’ is still practised in someareas of Japan. This type of net is made of polyethylene-mesh attached to a framework (usually 140cm high and 45cm wide) made of plastic-coated or galvanized wire. A series of pockets are stitched on the mesh at different levels. Seed scallops are placed in the pockets which are closed by tying with nylon yarn. The net is hung in the water by means of nylon ropes.

It normally takes two to three years for the seed scallops to grow to market size, which for the deep-sea scallop in Japan is 10–11cm in length.

At temperatures between 12 and 20°C, the Chinese species of scallops reach marketable size in 1.5–2 years. Floating racks and plastic mesh cages are used for grow-out and many growers rear scallops and the seaweed Laminaria in the same site, as it increases the totalproduction and income from the same area.The market size for C. farreri is about 6–7cm and for C. nobilis it is 7cm length.