Clam culture systems closely follow those described earlier for other bivalves. This also applies to the hatchery methods, which appear to be employed commercially only in the USA.

Clam culture systems closely follow those described earlier for other bivalves. This also applies to the hatchery methods, which appear to be employed commercially only in the USA. Like other bivalves, clams also seem to spawn in areas which are not very suitable for on-growing. So the simplest system of culture involves the transplantation of seed clams from the spawning areas to growing beds with sandy bottoms in shallow intertidal areas, which are not exposed for long periods. This system is widely adopted in Japanese clam culture. Before the seed are planted, the bottom soil is loosened by a harrow and left undisturbed for about a week.

Seedlings are planted by hand, and in temperate climates the best growth is obtained when they are planted in the spring. Seed is also available in the autumn, and if necessary planting can be done at this time as well. The stock- 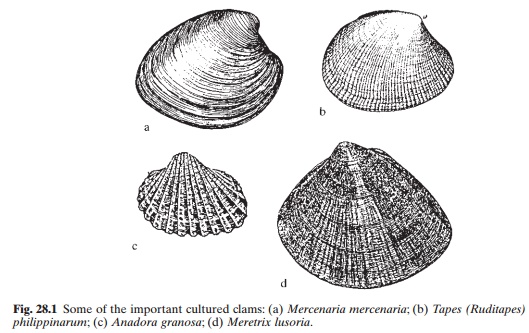 ing density is roughly 1–4l per m2, but the main consideration is even distribution and avoidance of crowding. Under Japanese conditions, the market size of about 10g is reached in between one and two years. Among the major predators are ducks, starfish, octopus and crabs. Harvesting is performed throughout the year, removing only the fully grown clams and leaving the smaller ones for further growth. Hand tools as well as dredges operated from boats are used for harvesting.

In the USA, where the hard clam or quahog is commercially cultivated, culture systems vary from intensive recirculating systems to transplantation of seed clams to suitable shellfish beds for on-growing. The hard clam has high temperature tolerance, but grows only in salinities above 20ppt. Seed clams are produced in several commercial hatcheries in the USA and a clam farmer can obtain his requirements of seed from them, although many hatcheries use a good part of their production for on-growing in their own grow-out facilities. A somewhat unique system of artificial propagation of the small-necked clam (Tapes philippinarum) is carried out in China (Zong-Qing, 1982). Shallow ponds in the lower intertidal region are prepared by eradicating pests and predators

and fertilizing as in normal fish ponds. Selected phytoplankton, such as Chaetoceros, are introduced to produce enough food for the larvae. Sperm and eggs obtained by induced spawning are introduced into the ponds, where fertilization and development of embryos take place. Soybean milk may be added to feed the larvae for faster development. It is reported that up to 15 million seed clams are thus produced in 1ha of pond every breeding season.