In the above picture Smith said something to Arun then Arun reports what Smith said to him in the other pictures, this is known as reported speech. First Arun used the exact words of Smith, it is direct speech then he said in his own words it is indirect speech. Thus, we can report a conversation in two types.

The things that we have to concentrate when we report a speech.

* Reporting verbs (Smith said that he would come the next day.)

* Conjunctions (Smith said that he would come the next day.)

* Pronoun (Smith said that he would come the next day.)

* Tenses (Smith said that he would come the next day.)

* Adverbs (Smith said that he would come the next day.)

Indirect - Kaitlyn said that she was very busy then.

* Two verbs commonly used while reporting are told and said.

He said (that) he was cooking dinner.

He told me (that) he was cooking dinner.

Did you notice that tell/told has been used in the sentence which mentions the listener?

In reported speech we need not mention the listener when we use say/ said.

He said (that) he was cooking. [listener not mentioned)

In direct speech we say: Rahim said to me, 'I will be waiting here.'

In Direct Speech, we use inverted commas to mark off the exact words of

the speaker. In Indirect Speech we do not. 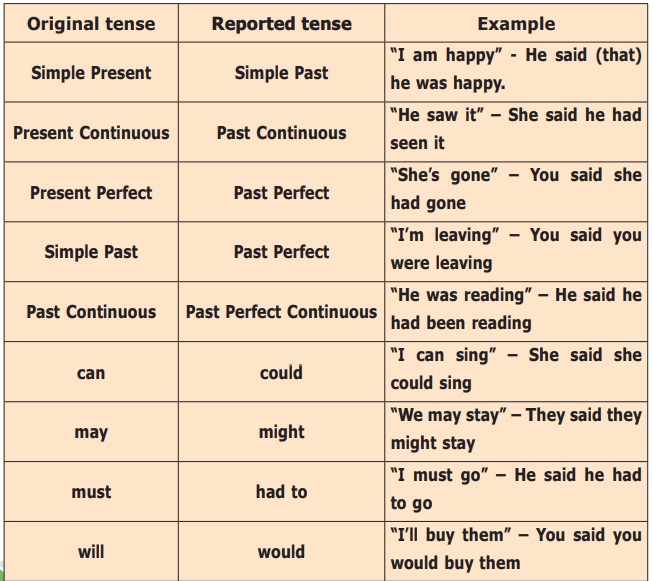 When the reporting or principal verb is in the Past Tense, all Present tenses of the Direct are changed into the corresponding Past Tenses. Thus:-

(a) A simple present becomes a simple past.

Indirect - He said (that) he was fine.

Direct - She said, “My sister is learning Bharatanatyam.”

Indirect - She said (that) her sister was learning Bharatanatyam.

(c) A present perfect becomes a past perfect.

Indirect - He said (that) he had won the match.

(d) The shall and the will of the Future Tense is changed into should and would.

(e) The simple past in the Direct becomes the past perfect in the Indirect.

Direct - She said, “The horse died in the night.”

Indirect - She said that the horse had died in the night.

(f) The tenses may not change if the statement is universal truth.

Direct - The teacher said, “The earth goes round the sun.”

Indirect - The teacher said the earth goes round the sun.

(f) If the reporting verb is in the Present Tense, the tenses of the Direct Speech do not change.

For example, we may rewrite the above examples, putting the reporting verb in the Present Tense, thus:

He says he is fine.

She has just said her sister is learning Bharatanatyam.

He says he has won the match.

She says the horse died in the night. 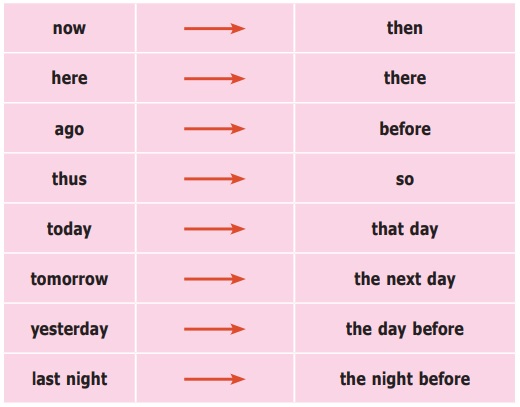 Direct - The Prince said, “It gives me great pleasure to be here this evening.”

Indirect - The Prince said that it gave him great pleasure to be there that evening.

(h) The changes do not occur if the speech is reported during the same period or at the same place.

Direct - The Prince said, “It gives me great pleasure to be here this evening.”

Indirect - The Prince said that it gives him great pleasure to be here this evening.

In reporting questions the Indirect Speech is introduced by some verbs as asked, enquired, whether or if etc.

Indirect - He asked me what I was doing.

Direct - “Where do you live?” asked the stranger.

Indirect - The stranger enquired where I lived.

Direct - He said, “Will you attend the meeting?”

Indirect - He asked them whether they would attend the meeting.

A) Change the following into Indirect Speech:-

Answer: He asked her what she wanted.

Answer: He enquired how his father was.

Answer: He asked him whether he was coming home with him.

4. The poor man exclaimed, “Will none of you help me?”

Answer: The poor man asked in despair whether none of them would help him.

Answer: I asked whether he knew the way home.

In reporting commands and requests, the Indirect Speech is introduced by some verbs as ordered, requested, commanded, shouted, urged etc.

Direct - He said to him, “Please wait here till I return.”

Indirect - He requested him to wait there till he returned.

Indirect - The judge commanded them to call the first witness.

Indirect - He shouted to them to let him go.

Direct - He said, “Be quiet and listen to my words.”

Indirect - He urged them to be quiet and listen to his words.

B) Change the following into Indirect Speech

1.“Bring me a glass of milk,” said the swami to the villagers.

Answer: The swami commanded the villages to bring him a glass of milk.

Answer: The teacher ordered the boys to sit down.

Answer: The officer shouted to his men to halt.

Answer: The king ordered the Hatter to take off his hat.

Answer: The teacher commanded him not to read very fast.

Answer: He urged me to wait until he came.

Answer: He ordered his servant to hurry up and not to waste time.

Answer: Their mother urged the children to run away.

9. He said, “Daughter, take my golden jug, and fetch me some water from the Well.”

Answer: He requested his daughter to take his golden jug and fetch him some water from the well.

10. “Go down to the bazaar. Bring me some oil and a lump of ice.” ordered his master.

Answer: His master ordered him to go down to the bazaar and bring him some oil and a lump of ice.

1. Punitha asked Pushpa what she was reading.

2. Pushpa told her that he was reading Robinson Crusoe.

3. Punitha asked her what it was all about.

4. Pushpa said it was about a man wrecked on an island.

5. Punitha then asked her friend who gave her the book.

6. Pushpa answered that her uncle gave it to her at Christmas.

7. Finally Punitha inquired if she could borrow it.

8. Pushpa replied that she would certainly lend it to her.

(a) "May I borrow it?" inquired Punitha.

(b) "What are you reading, Pushpa?" asked Punitha.

(c) "It is about a man wrecked on an island," Pushpa said.

(d) "Of course I will lend it to you," replied Pushpa.

(e) "Uncle gave it to me at Christmas,' answered Pushpa.

(f)"What is it all about?" Punitha asked.

(h)"Who gave you the book, Pushpa?" Punitha then asked.

1. Nevin asked his father when the next letter would come.

Answer: Nevin asked his father, “When will the next letter come?”

2. I wrote that I would visit him next day.

Answer: I wrote, “I will visit you tomorrow”.

4. Lakshan asked me if I had anything to say.

Answer: He asked me, “Do you have anything to say”.

5. An old mouse asked who would bell the cat.

Answer: An old mouse asked, “Who will bell the cat?”

6. Mervin said that he wanted to be a soldier.

Answer: Mervin said, “I want to be a soldier”.

7. Ebin asked me what I wanted.

Answer: Ebin asked me, "What do you want?"

8. Bhagya said that she had seen that picture.

Answer: Bhagya said, "I have seen this picture”.

9. The stranger asked Nasrin where she lived.

Answer: The stranger asked Nasrin, "Where do you live?"

10. I asked Mary if she would lend me a pencil.

Answer: I asked Mary, "Will you lend me a pencil?”:

F. Sherlyn receives a postcard from her friend Pushpa who is holidaying in Sri Lanka. She calls her friend Galen and tells him what Pushpa has written. Help her by filling in the blanks, using reported speech. 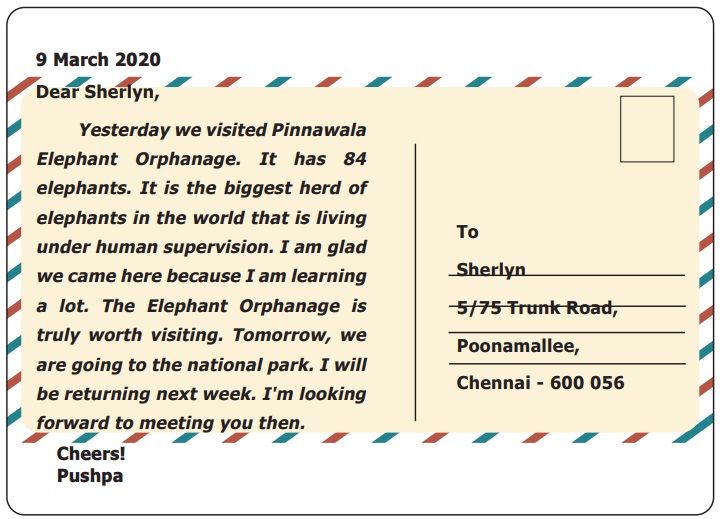 Hello, Galen Today I received a postcard from Pushpa. Remember I had told you that She has gone to Sri Lanka on a holiday? Well, she has written from Colombo. She has written that she had visited Pinnawala Elephant Orphanage. It had 84 elephants. She said that it is the biggest herd of elephants in the world that is living under human supervision. She also added that she she was glad that they had come there because she was learning a lot . The Elephant Orphanage was truly worth visiting. She said that next day, they are going to the national park. She would be returning next week and added that she was looking forward to meeting me then.

A. Change the following into indirect speech :

Answer: Ramu says that he is busy.

Answer: He said that he was going to the cinema.

Answer: Ravi said that he had bought a cycle.

Answer: Ram said that Visu had come at night.

Answer: He said that honesty is the best policy.

Answer: She said that she had done her homework.

Answer: He says that he is happy.

Answer: The teacher said that Hari would definitely pass.

Answer: Raju said that he would be there that evening.

B. Change the following into direct speech :

1. The teacher ordered the boys to leave that place.

Answer: The teacher said to the boys, “Leave this place”.

2. I requested him to give me a glass of water.

Answer: I said to him, “Please give me a glass of water”.

3. The captain ordered the soldiers to stand at ease.

4. My brother said that he might go to Kolkata.

Answer: My brother said, “I may go to Kolkata”.

5. He said that the earth moves around the sun.

Answer: He said, “The earth moves around the sun”.

6. Ravi asked Ganesh when he was going to the library.

Answer: Ravi said to Ganesh, “When are you going to the library?”.

7. The policeman ordered the boy to show him his licence.

Answer: The policeman said to the boy, “Show me your licence”.

8. She told him that she was going to the market then.

Answer: She said to him, “I am going to the market now”

9. He said that he was buying a cell phone that day.

Answer: He said, “I am buying a cell phone today”.

Answer: He exclaimed sadly that he was ruined.

Answer: He exclaimed sorrowfully that their foes were too strong.

Answer: She exclaimed that he was very smart.

Answer: He exclaimed with disgust that it was a nuisance.

Answer: He exclaimed with sorrow that he did not come.

a. Sharun said to me, Are you coming to school tomorrow?’

Answer: Sharun asked me if I am coming to school, the next day.

b. “We must visit the historical buildings of Delhi since we are here,’ said Ashok.

Answer: Ashok said that they had to visit the historical building of Delhi, since they were there.

c. ‘Have you read The Wind in the Willows?’ asked Amutha.

Answer: Amutha asked whether he had read ‘The Wind in the Willows’.

d. Teacher said to us, ‘You must conduct the experiment very carefully.’

Answer: The teacher told us that we had to conduct the experiment very carefully.

Answer: Tejaswar exclaimed happily that it was a great news.