A pronoun is a word or phrase that substitutes a noun or a noun phrase. There are ten types of pronouns generally used.

A pronoun is a word or phrase that substitutes a noun or a noun phrase. There are ten types of pronouns generally used.

Read the stories of Ravi and Rani.

Ravi is an intelligent boy. Ravi lives in a small village. A chill breeze touches the skin, a cool lake with swans swimming on the lake catches the eyesight. Ravi loves nature a lot. Ravi is studying in class ten in a government school. Ravi loves helping others. When a woman was crossing the road with heavy luggage, Ravi asked the woman, “May I help you?” and carried the luggage and dropped the luggage at home. The woman thanked Ravi for the help.

Rani is a brilliant girl. Rani lives in an urban area where huge buildings touch the sky, buzzing noise of traffic hit the ears and crowds move busily towards work. One day when Rani was on the way to school, Rani saw a dog hurt by a moving scooter. At once Rani went near the dog, lifted the dog and rushed to a veterinary doctor. The dog, after recovering, shook the tail to thank Rani.

A. Write the words that can replace Ravi, Rani, woman, luggage and the dog when we use them for the second and subsequent times in the passage

These words are called Personal pronouns.? 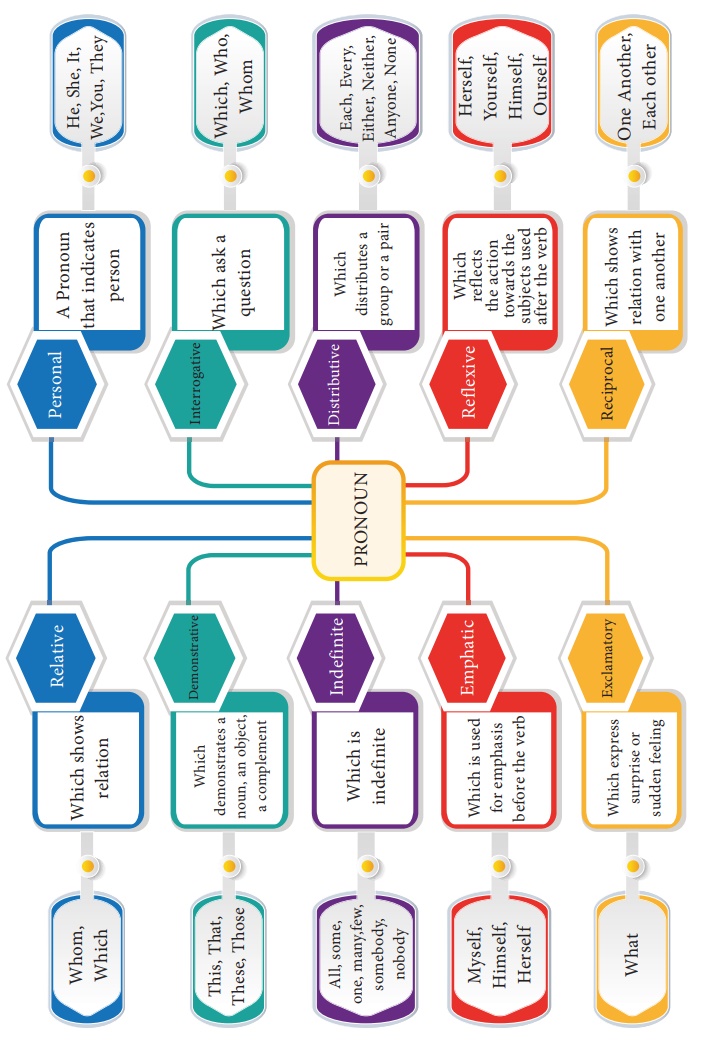 B. Fill in the gaps with personal pronouns.

Kumaravel lives in Thiruvannamalai. He is a doctor. All the people like him because of his helping nature. His hospital is located at Car street and most of his patients are poor so he does not charge much money. His daughter goes to school. She studies in 5th Standard. Her teachers love her very much. Her friends are also very good. They always encourage her. They have given her good advice. Her mother is also a teacher. She always encourages her to keep studying. I also like her as she often comes to my house. One day she told my mother that she wants to learn cooking. My mother taught her cooking. Now, she cooks well.

C. Fill in the gaps with appropriate Pronouns.

12.      He himself is responsible for the downfall of his life.

Answer: I have a book which / that is written by Rabindranath Tagore.

Answer: Kavita is my teacher who teaches us English.

Answer: This is Varun whose father is an architect.

Answer: She invited most of her friends who attended the.party.

Answer: Give me the pen which / that was gifted to you on your birthday so that 1 can write a letter.

Answer: I have sold the house which / that was located on the bank of a river.

Answer: Here is your watch which / that has been found in the garden.

1. There are two main types of speech: direct speech and indirect or reported speech.

2. Direct speech repeats the exact words the person used, or how we remember their words.

3. Reported speech is how we represent the speech of other people or what we ourselves say.

E. Read the different verb forms where they remain the same in the direct and indirect speech in the following cases. Fill in the blanks with missing indirect speech.

1. If the reporting verb is in the present tense.

1 am enjoying my holiday. -  Krish says that he is enjoying his holiday.

2. When we report a universal truth (something that is always true)

3. With modal verbs would, might, could, should, ought to, used to.

4 With would rather, had better

If I tidied my room, my dad would be happy.

- Sriram said that if he tidied his room, his dad would be happy.

When I was staying in Madurai Imet my best friend.

- Jaheer said that he had met his best friend when he had been staying in Madurai.

I must wash up.

- She said that she must wash up/ she had to wash up.

We must do it in June.

F. Read the following dialogue and report it.

Johnson : “What are you doing here, Suganthi? I haven’t seen you since June.”

Suganthi : “I’ve just come back from my holiday in Ooty.”

Suganthi : “I love Ooty. And the people were so friendly.”

Johnson : “Did you go to Coakers Walk?”

Suganthi : “It was my first trip. I can show you some pictures. Are you doing anything tomorrow?”

Johnson : “I must arrange a couple of things. But I am free tonight.”

Suganthi : “You might come to my place. At what time shall we meet?”

Johnson asked Suganthi  what she was doing there. And he said he had not seen her since June. Suganthi explained that she had just come back from her holiday in Ooty. Johnson wondered if she had enjoyed it. Suganthi told him that she loved Ooty and that the people had been so friendly. Johnson wanted to know If / whether she had gone to the Coakers Walk. Suganthi said that it had been her first trip and that she could show him some pictures. And then she asked him if he was doing anything the following day/the next day Johnson explained that he must arrange / had to arrange a couple of things. But he added that he was free at night. Suganthi suggested that he might come to her place and asked him at what time they could meet. Johnson said he would be there at eight. And finally he asked if/whether it was all right. 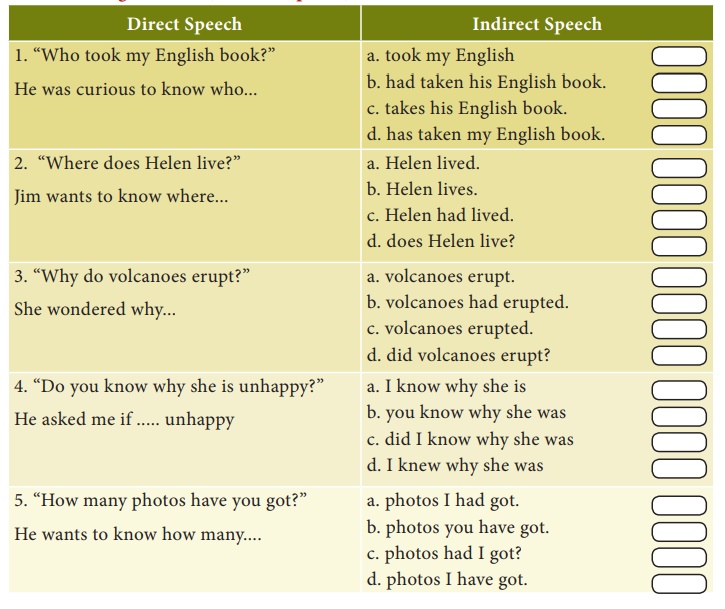 He was curious to know who

Jim wants to know where

He asked me if unhappy

Indirect Speech : I knew why she was

Indirect Speech : photos I have got.