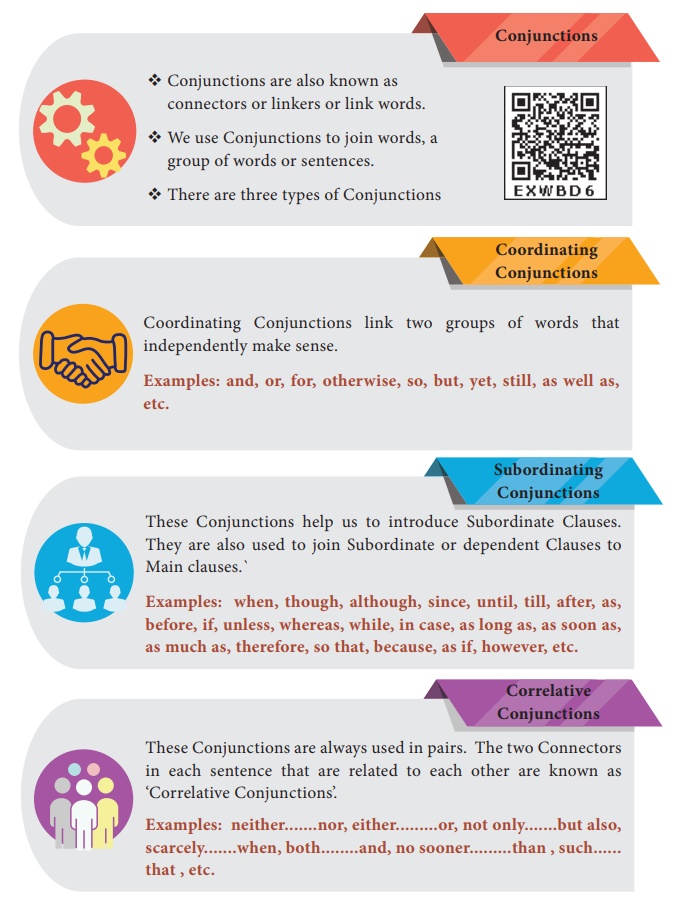 Conjunctions And Their Functions 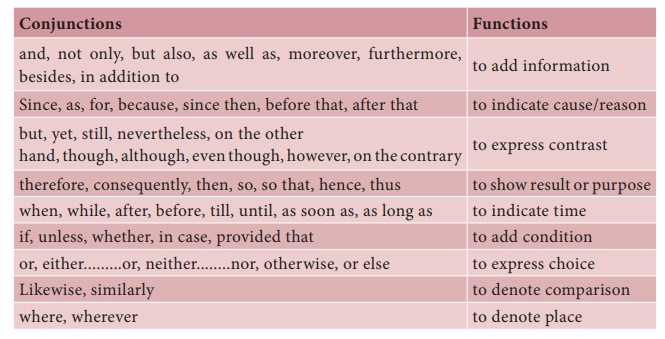 Now, let us see various types of Conjunctions and practise how to use them in sentences.

A. Complete the sentences given below choosing the right connectors given in brackets.

5.           They faced many hardships nevertheless they are always cheerful. (although, nevertheless, otherwise)

B. Fill in the blanks with the connector that goes with the underlined words.

-Though we came late, we did not miss the train.

They checked the packet twice and then they sealed it.

As soon as Sita saw a snake, she ran away, (or)

Sita saw a snake and at once she ran away.

Robert completed the project and submitted it to the teacher.

5.           Yusuf was running high temperature. He could not take part in the competition.

As Yusuf was running high temperature, he could not take part in the competition,

(or) Yusuf was running high temperature and so he could not take part in the competition.

1. Though he was honest, he was punished.

2. Walk carefully otherwise you will fall down.

3. My mother called me while I was playing football.

4. My salary is low nevertheless I find the work interesting.

5. The passengers rushed to board the bus as soon as it arrived.

as soon as,as long as

1. “When I was alive and had a human heart, ” answered the statue, “I did not know what tears were, for I   lived  in  the  palace where sorrow was not allowed to enter. My courtiers called me the Happy Prince and Happy Indeed I was. So I lived and so I died.

2. Many writers make incorrect sentences when they try to put sentences together. They may make grammatical errors and leave out important punctuation marks. Making such mistakes is quite common while preparing the first draft .  So he must carefully edit his final draft.

3. In most large cities and towns of our country, there are special schools for girls. Moreover / And also, there are many co-educational schools where girls and boys study together. Most parents allow their daughters to attend these schools, but there are some parents who are against such schools for girls after the age of 14 or 15.

F. Rearrange the words in the correct order to make meaningful sentences.

I am as healthy as you are.

Since today is your birthday, put on the new dress.

Though Rani is allergic to dogs, she has six of them.

If you apply for a loan, you will get it immediately.

The term "nominalisation" refers to he process of producing a noun from another part of speech by adding a derivational affix.

A grammatical expression is turned into a noun phrase when we nominalise a sentence. For example,

In sentence B, we have used the word ‘growth’ which is the noun form of the verb ‘grow’ by adding the suffix ‘th’.

Nominalisation can be done in three different ways.

2. Some words are turned into nouns without any adding suffix.

3. Some words do not undergo any change when they are used as nouns.

G. Write the noun forms of the following words.

1. He decided to turn down her request.

He made a decision to turn down her request.

2. The team members reviewed the matter. It helped them solve the problem.

The review of the matter by the team members helped them solve the problem.

H. Complete the following sentences using the noun form of the words given in brackets

4.           The monuments are to be preserved because of their historical significance. (significant)

I. Rewrite the sentences nominalising the underlined words. The first one has been done for you.

Students work with diligence to score well in exams.

1. We succeeded in our attempt.

We got success in our attempt.

Nalini has happiness in her life.

3. She failed and it disappointed her.

Her failure gave her disappointment.

4. India became an independent country in the year 1947.

India got independence in the year 1947.

5. The child resembles her father.

The child has a resemblance to her father.

J. Combine the pairs of sentences given below into a single sentence using the noun form of the highlighted words.

Answer: Everyone likes him for his honesty.

Answer: Though Sathya gave an explanation, the police wanted the proof.

Answer: His speech is an attraction to all.

Answer: Punctuality and regularity of Suresh have earned him a good job.

Answer: The quick arrival of the policeman made us happy.

K. Complete the sentences in the paragraph using the appropriate form of words given in brackets.

1. My sister wanted to go to Mumbai last week. She made a decision (decide) to buy a ticket at once. As reservation (reserve) could be done online, she gave preference (prefer) to book a ticket that way. First, she collected information (inform) about the arrival (arrive) and departure (depart) of trains and airplanes.

2. A few days later, Androcles was captured by his master. He had to suffer all kinds of punishment (punish). At last, he was thrown to a lion which was in great hunger (hungry).It had been kept in an enclosure (enclose) and had not been fed for several days. His friends stood there with tearfull (tear) eyes as the lion rushed towards him. The lion stopped near him and stood for a while looking (look) at him. Then it lay down by his side like a pet dog. Obviously (obvious), the lion recognized Androcles and the help (help) he had given it.

Words which denote an action are known as verbs. We classify verbs into two types. They are

a. My brother goes to temple daily.

b. We have already finished the project.

The words printed in bold letters are finite verbs.

1. Finite verbs indicate the tense and time of actions.

2. Finite verbs undergo a change as and when the Subject (number or person) changes.

1. Non-finite verbs do not indicate the tense and time of actions.

2. Non-finite verbs do not change even when the Subject (number or person) changes.

There are three kinds of non-finite verbs.

a. My son likes to watch cricket matches.(Infinitive)

b. Playing chess is my hobby. (Gerund)

c. Driven out of the kingdom, the king hid himself in a forest. (Participle)

The above group of words are known as phrases. It doesn’t contain a finite verb.

A Phrase is a group of words without a finite verb

a boy who is intelligent

a pen which is costly

a story which is interesting

The groups of words given above are clauses

A Clause is a group of words which consists of a finite verb.

Having completed the work, the boy went out to play.

The underlined part of the sentence, doesn’t contain a Finite verb. This group of words is a Phrase.

After the boy had completed the work, he went out to play.

The underlined part of the sentence contains a finite verb. Hence, we call it a clause.

We have three kinds of phrases according to their functions in sentences.

1. Adjective Phrase: It is a group of words that does the work of an adjective. It describes the noun.

We bought chairs made of wood for our auditorium.

2. Adverb Phrase: It is a phrase which functions as an adverb. This Phrase supplies some information about the action.

When the patient was taken to the Emergency ward, the doctors rushed there in a hurried manner.

3. Noun Phrase: This is a phrase which acts as a noun.

A boy of class X became the house captain.

L. Identify the phrases in the following sentences and classify them as Adjective, Adverb or Noun phrases.

The students were sitting quietly in the classroom until the teacher arrived.

2. Noun Clause: This clause functions as a noun.

Whoever wins the contest will get a prize.

(The highlighted portion acts as a noun here)

3. Adjective Clause: It acts as an adjective and describes a noun.

I went to the place where I was born.

(The highlighted words describes the place)

M. Identify the clauses and classify them accordingly.