• To understand the four cardinal directions.

• To learn about the shape of the Earth.

• To understand about the model of the Earth - the globe.

• To understand the significance of lines of latitudes and longitudes.

• To know how standard time is calculated around the world.

Surya and Poovendhan are very good friends who study in the sixth standard and live in a beautiful village called Thirunandriyur. Surya lives in South Street, while Poovendhan lives in North Street. Every day they go to school together. One day......... 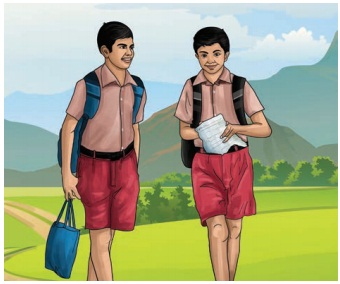 Surya: Why are you coming so late, Poovendha?

Surya: What took you so long?

Poovendhan: You live on South Street. But, I have to come from the North Street, which is so far away from here. That’s why I’m late.

Surya: Yes, that’s true. But wherever we live, don’t you remember that we all live on planet Earth?

Poovendhan: Yes! Yes! I do remember, Even our Ponni Miss taught us about the Solar System.

Poovendhan: Tell me, what is it?

Surya: We can see our house, the things around us, the people, animals and birds with our eyes. But, why can’t we see our Earth as a whole?

Poovendhan: Haven’t you seen it?

Surya: No, I haven’t. Have you ever seen it?

Poovendhan: Yes, in our school only.

Surya: Did you say, in our school?

Poovendhan: Yes, on our Ponni Miss’ table. Big and spherical!

Poovendhan: Exactly! That is our Earth

The bell rang as they reached school. They attended the morning assembly and went to the classroom. During the social science period, Surya asks Ponni Miss to clear his doubts.

Surya: Madam, you told us on the other day that our Earth is in the Milky Way galaxy.

Teacher: Yes, it is true. This is the model of the Earth.

Surya: A model of the earth, Madam? Please explain!

The teacher asks all the students to sit down and starts explaining.

The directions on the ground are always shown with respect to the North. If we know the North, then it is easy to find the other directions, namely South, East and West. These are the four cardinal directions. 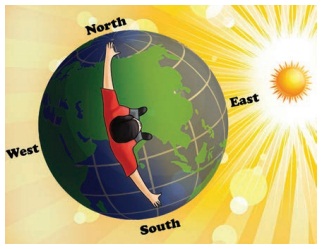 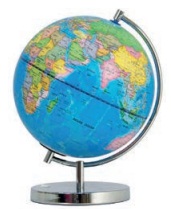 So, in order to see the shape of the Earth as a whole and to know its unique features, a three dimensional model of the Earth was created with a specific scale.

The surface area of the Earth is 510.1 million square kilometres.

The Earth which is spherical, is flat at the poles and bulges at the Equator. The Earth cannot be compared with any other geometrical shape as it has a very unique shape. Hence, its shape is called a geoid (earth shaped)

The Earth moves around the Sun. It also rotates from the West to East on its axis at an inclination of 23 ½°. The globe is also inclined at an angle of 23 ½°. The axis is an imaginary line. It is not actually found on the Earth.

* The first globe was created by the Greeks in the year 150 AD(CE).

* The Indian astronomer Aryabhatta - I has mentioned in his book. ‘Aryabhatta Sidhantha’. ‘The stars in the sky seem to move towards the West because of the Earth’s roation on its axis’.

Lines on the Globe

There are imaginary lines which are drawn on the globe horizontally and vertically to find a location and calculate distance and time. These imaginary lines are called lines of latitudes and longitudes.

Ptolemy, a Greco – Roman mathematician, astronomer and geographer, was the first person to draw the lines of latitude and longitude on a map. 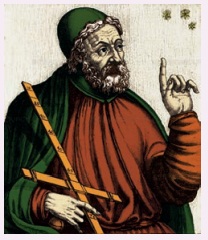 In his book, ‘Geographia’ a detailed description about the Earth’s surface, its size and circumference and many locations based on the lines of latitude and longitude are given.

The imaginary lines which are drawn horizontally on East - West direction on the Earth are called the lines or parallels of latitudes. The 0° line of latitude which divides the Earth into two halves is known as the Equator. From the Equator, parallel lines are drawn towards the North and South poles at equal intervals. The latitudinal extent between 1° line of latitude on Earth is 111 km. 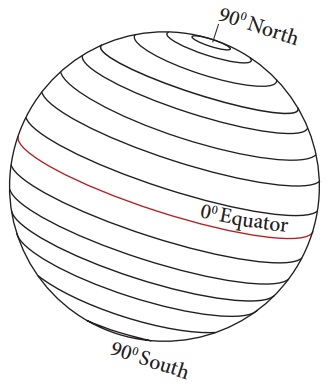 Since the Earth is geoid shaped, the length of the lines of latitude decreases from the Equator towards the South and North Poles. The 90° North and South Poles are not found as lines, but as points.

The Equator is the longest of all lines of latitude. Hence, it is also known as ‘The Great Circle’. 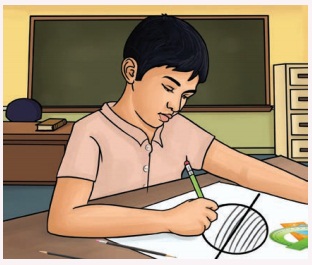 Draw a circle on a paper. Draw a horizontal line across the middle of a circle. Keeping this line as 0°,  draw lines on both sides with an equal interval of 15° with the help of a protractor. The lines you have drawn are lines of latitudes. 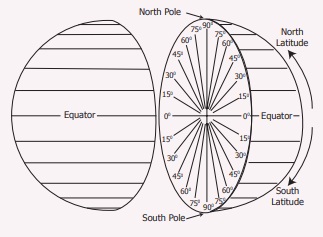 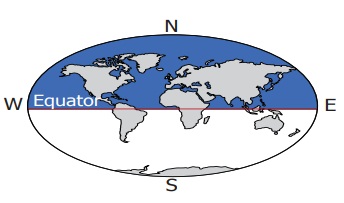 The area of the Earth from the equator (0°) to the South Pole (90°S) is called the Southern Hemisphere. 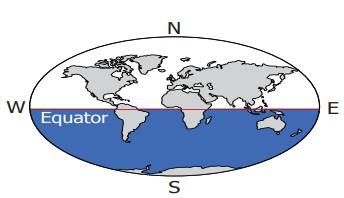 The area of the Earth from the equator (0°) to the South Pole (90°S) is called the Southern Hemisphere.

Based on the latitudinal extent, in which hemisphere is India located?

The earth rotates on its axis at an inclination of 23½°. It also revolves around the sun while rotating. Based on the angle at which the sun’s rays fall on the earth, certain lines of latitude gain significance. 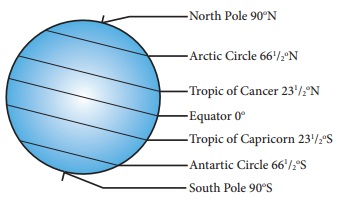 The Sun’s rays do not fall equally on all parts of the earth. They fall vertically over the Equator and slanting towards the poles. Thus, all the places on earth do not have the same amount of temperature. Based on the amount of heat received from the Sun, the lines of latitude help in dividing the earth into different climatic zones. 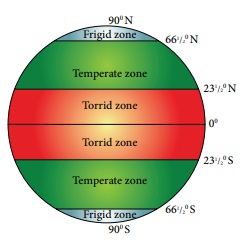 From the Arctic Circle (66½°N) to the North Pole (900N) and from the Antarctic Circle (66½°S) to the South Pole (90°S), the Sun’s rays fall further inclined, through out the year. The temperature is very low. Hence, this region is known as Frigid Zone.

Some lines of latitude are also called by the following names in Tamil. 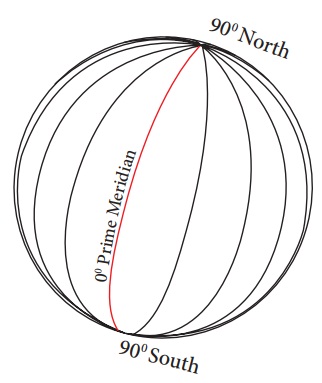 The lines of longitude are found as semi circles covering 111 km at the Equator, 79 km at 45° latitude and no space between the lines at the poles. 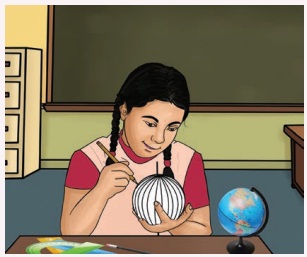 Take a ball and a thin iron wire. Pierce the ball with the wire from one end to the other end through the middle. Remove the wire. Draw circles around the points. Name the northern most point as North Pole and the southern most point as South Pole. The angle of a circle is 360°. Mark points on the circle at an interval of 15° using a protractor. Then draw lines joining these points on the top and bottom of the ball. The lines that you have drawn are lines of longitudes. 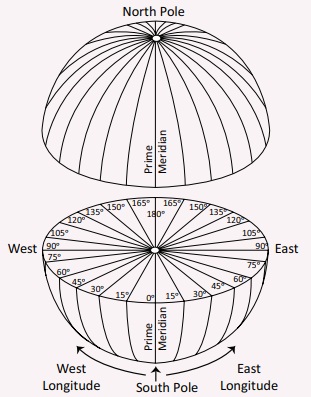 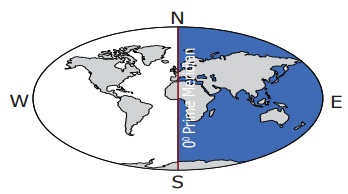 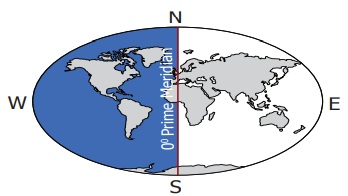 Based on the longitudinal extent, in which hemisphere is our country located? Look at the globe and answer.

The Royal Astronomical Observatory is located at Greenwich near London in England. According to the International Meridian Conference held in 1884 in Washington DC in the U.S.A. all nations agreed on choosing the Greenwich Meridian as the international standard meridian (0°). 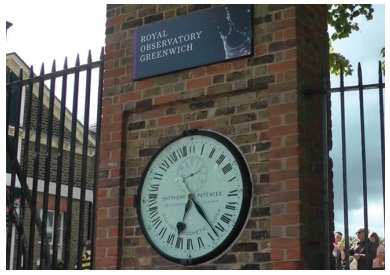 This line of longitude is called the Prime Meridian and it is also known as the Greenwich Meridian because it passes through Greenwich. 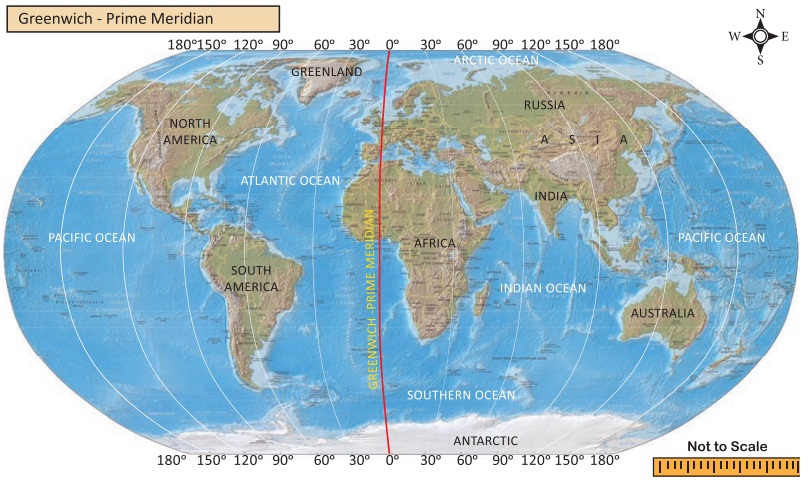 The 180º line of longitude has been fixed as the International Date Line, drawn on the Pacific Ocean between Alaska and Russia through Bering Strait. If a person crosses this line from the West to East, he loses a day. On the other hand, when he crosses from the East to West, he gains a day. Based on this, the date is fixed for different countries or regions of the world. 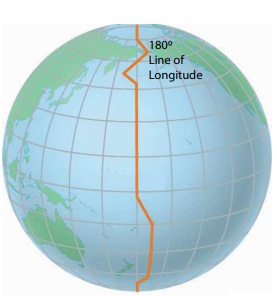 The International  Date Line is not straight.  If the line is drawn straight, two places in the same country would have different dates.  So the International Date  Line  is  found  zigzag  in  certain places to avoid confusion. 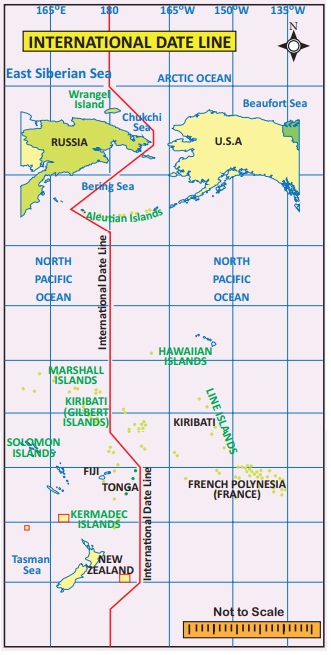 The imaginary lines of latitude and longitude form a grid like pattern on the surface of the earth, known as the ‘Earth grid’ or ‘Geographic grid’. 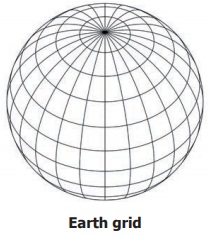 To locate a place exactly on earth, the latitudinal and longitudinal extensions are required.

* The Earth takes one day to rotate on its axis.

When the Sun is overhead the Greenwich Meridian at 12 noon, it is the local time of that place. The world time is calculated by this standard line of longitude. It is known as the Greenwich Mean Time (GMT).

1. The word meridian is derived from the Latin word ‘Meridianus’. It means mid day. (Medius – Middle, dies – day). So, meridian means the position of the Sun found overhead at a place at noon.

Local time is calculated when the sun is overhead at noon. Many lines of longitude may pass through a country. Countries may or may not observe a common time. The standard time of a country or a part of it is calculated keeping a particular meridian as a standard one.

The meridians are selected in multiples of 15° or 7 ½°. It is done in such a way that the variation of standard time from the Greenwich is expressed either as 1 hour or ½ an hour. 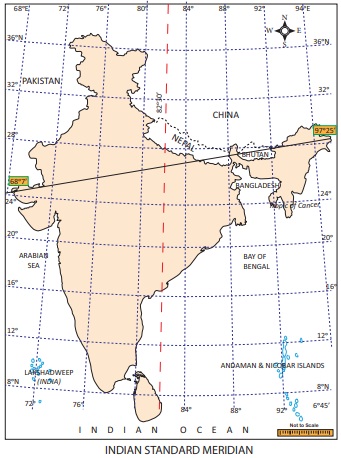 The longitudinal extent of India is from 68°7’ E to 97°25’ E. As many as twenty nine lines of longitude pass through India. Having 29 standard time is not logical. Hence 82½° E line of longitude is observed as the Prime Meridian to calculate the Indian Standard Time (IST).

The 82½° E line of longitude passes throughMirzapur near Allahabad in Uttar Pradesh. This is located at an equal distance from Ghuar Mota in Gujarat and Kibithu in Arunachal Pradesh.

The world has 24 time zones. Some countries have a great longitudinal extent. So they have more than one standard time. Example: Russia has 7 time zones. 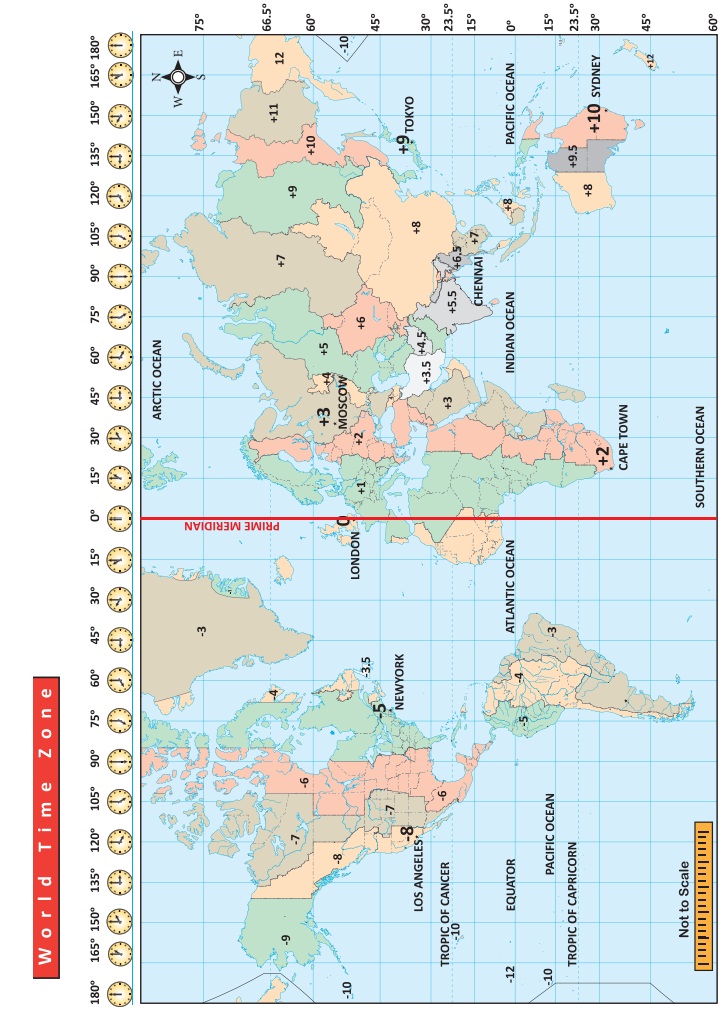 1. What is the difference in time between the GMT and IST?

3. If it is 12 Midnight at London, what would be the time in India?

4. The standard time of Sydney city in Australia is found to be at a difference of _________ hours from that of the GMT.

5. Mr. Senthamizh travels by flight from Chennai to London. He boarded the aeroplane at 9a.m After 12 hours of travel, at what time (GMT) would he have reach London?

We saw about the lines of latitude and longitude drawn on the globe. Besides these, physical land forms, seas, oceans, countries etc., are also found on the globe

1. The imaginary lines drawn horizontally from the East to West on the globe and maps are called lines of latitude or parallels.

2. The imaginary lines drawn vertically from the North to South on the globe and maps are known as lines of longitude or meridians.

3. The 0° line of latitude is called theEquator.

4. The 0° line of longitude is called the Greenwich Meridian or the Prime Meridian.

7. Lines of latitude are circles which are drawn at a distance of about 111 km. The poles are shown as points.

9. Lines of latitude do not merge, while lines of longitude converge at the poles.

10. Time is calculated on the basis of the lines of longitude. The 180° line of longitude is the International Date Line.

2. Lines of Latitude / Parallels– Imaginary lines drawn horizontally on the Earth from the East to West

3. Lines of Longitude / Meridians – Imaginary line drawn vertically on the Earth from the North to South

5. Hemisphere – Dividing the earth on the basis of 0° lines of latitude and longitude with regard to directions

6. Equator– The line of latitude drawn horizontally at the centre of theEarth

Through this activity you will know about the globemodel!.

Step -1 Use the URL or scan the QR code to open the activity page.

Step -2 Click the red “hot spot” area to see the main landmarks of the globe.

Step -3 In the view box Click the “Core” option to view the Earth's inner layers.