While taiga forest looks similar in Alaska and Patagonia (South America), a closer look will immediately reflect that species, genera and even families of plants are quite different.

While taiga forest looks similar in Alaska and Patagonia (South America), a closer look will immediately reflect that species, genera and even families of plants are quite different. As an example, both Alaska and Patagonia forests in-clude large conifers, but while in Alaska we frequently see members of Pinaceae family like spruces (Picea) or firs (Abies), in Patagonia these trees are absent and “replaced” with superficially similar trees of Araucariaceae and Podocarpaceae families of conifers. Analogously, Arizona desert is similar to African Kalahari but while American deserts are rich with cacti, similarly looking African plants belong top completely different group, succulent spurges (Euphorbia). The ef-fect of these differences on the botanically educated traveler is a bit similar to the nightmare when you first see a familiar thing but approach it—and realize that this is something completely alien and strange.

These floristic differences are due to the various geological and biological histo-ries of these places. Plant biogeography studies them, explains them and creates the floristic kingdoms classification (Fig. 9.2) which takes into account not eco-logical but taxonomical (phylogenetic) similarities and differences. 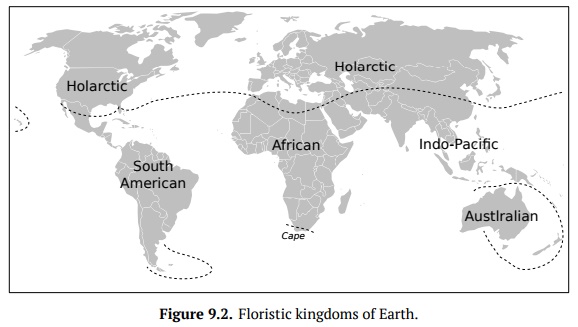 There are only five floristic kingdoms:

Holarctic Most of North America and temperate Eurasia. Holarctic kingdom islargest, it covers two continents and most of Northern hemisphere. Typical representatives are pines (Pinus) and oaks (Quercus).

African Excluding Mediterranean Africa (very north of the continent). Africanacacias (Senegalia) are common to the most of savannas there.

Indo-Pacific From India to pacific islands including Hawaii. This kingdom isespecially rich of orchids (Orchidaceae); tropical pitcher plants (Nepenthes) grow only there.

Australian Australia, Tasmania and New Zealand. Numerous specific plantgroups, including Eucalyptus, Banksia and many others.

Every plant group has a specific range—the area of distribution. There are mul-tiple common ranges, e.g., circumpolar (groups distributed across North Pole, both in North America and Eurasia, like spruces, Picea) or Gondwanian (groups distributed in the South Africa, Australia and South America, like protea family, Proteaceae). Sometimes, there are disjunctions (breaks in range); a typical expla-nation for the disjunction is long-distance dispersal (like for ispaghula, Plantagoovata in California and West Asia) or extinction in the connecting places (like fortulip tree, Liriodendron in China and Atlantic states).

Recently, many plants became invasive after being introduced willingly (e.g., as forage plants) or accidentally (e.g., with seeds of other plants). These plants (like Eurasian spotted knapweed, Centaurea stoebe in North America, or North American box elder, Acer negundo in Eurasia) are often noxious since they tend to destroy the native vegetation.

It is frequently said that humans stated the new epoch of Earth life, homocene—era of Homo sapiens dominance, homogenization and great extinction of the flora and fauna. We need to stop that!