SO_BROADCAST Socket Option: This socket option enables or disables the ability of the process to send broadcast messages. Broadcasting is supported for only datagram sockets and only on net works such as ethernet, token ring etc but not point to point networks. This option controls whether datagrams may be broadcast from the socket. The value has type int; a nonzero value means ―yes.

SO_DEBUG:The option is supported by TCP only. When enabled for a TCP socket, the kernal keeps track of all the packets sent or received by TCP for the socket.

SO_DONTROUTE Socket option: The option specifies that outgoing packets are to bypass the normal routing mechanism of the underlying ptotocol. With Ipv4, the packet is directed to the appropriate local

interface, as specifried by the network and subnet protions of the destination address.  If the local

interface cannnot be determined from destination address, ENETUNREACH    is returned.

SO_ERROR options: This option can be used with getsockoptonly. It is used to reset the error status of the socket. When a errors occurs on a socket, the protocol module sets a variable named so_error for that socket to one of the standard unix values. The processs is immediately notified. The process can then obtain the values of so-error by fetching the SO_ERROR socket option. After the receipt, the so_error value is reset to 0 by the kernel.

SO_KEEPALIVE socket option: When the keep alsive socket option is set for a TCP socket, and if no data is exchanged across in either direction for two hours TCP automatically sends a keepalive probe to the peer. The probe is a

TCP segment to which the peer must respond.    The possible three scenarios ae ;

•        The peer responds with expected ACK. The application is no notified but the TCP sens another

•         The peer responds with RST which tells the local TCP that the peer host has crashed and rebooted..

socket‘s pending error is set to ECONNRESET and the socket is closed.

across the connection which can easily detect with select. SO_LINGER Socket Option :

The option specifies how the close function operates for a connection oriented protocol (TCP). BY default,

close returns immediately, but if there is any data still remaining in the socket send buffer, the system will try to deliver the data top the peer.

The SO_LINGER socket option lest us change this default. This option requires the folowing structure to be passed between the user process and the kernel. It is is defined by including <sys/socket.h>

Calling setsockopt leads to one of the following three scenarios depending on the values of the two structure.

1.                if l_onoff is 0, the option is turned off. The value of l_linger is ignored and the reviously discussed TCP defaults applies. Close returns immediately.

2.             IF l_onoff is nonzero and l_linger is 0, TCP aborts the connection when it is closed. That is TCPdiscards any data still remaining in the socket send buffer and an RST to the peer.

3.                IF l_onoff is nonzero and l_linger is nonzero, the kernel will linger when the socket is closed. Thst is if ther is any data still remaining in the socket send buffer, the porcess is put to sleep until either a) all the data is send and acknowledged by the peer. B) the linger time expires.

Let us understand when the close on a socket returns, given the various scenarios that we have seen so far. Assue that the client writes data to the socket and then calls close as shown in the folowing figure. 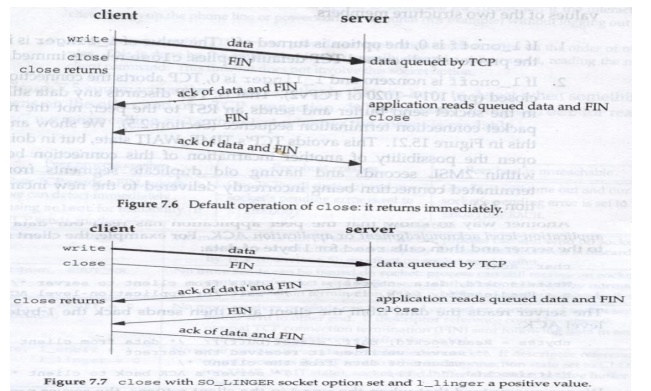 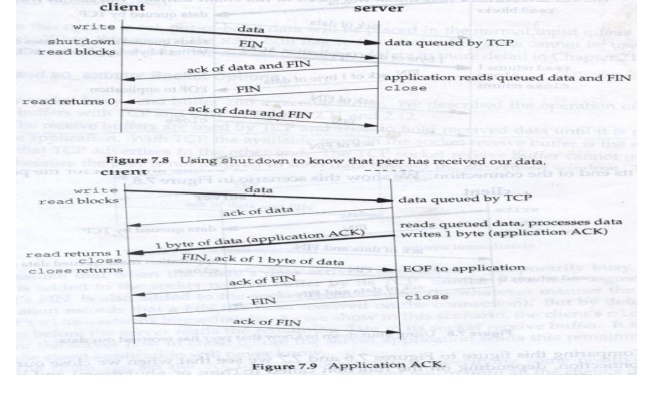 When This option is set, out of band data will be placed in the normal input queue. Whne this occurs, the

MSG_OOB flag to the receive functions cannot be used to read the out of band data.

Every socket has a receive low mark and a send low water mark. These are used in select function. These two socket opitons les us to change these options.

Receive low water mark is the amount of data that must be in the socket receive buffer for select function to be readable. If defalut to 1 for a TCP and UDP sockets. The send low water mark is the amount of available space that must exist in the socket send buffer for a select function to return writable. This low watermarl bnormally defaults to 2048 for TCP sockets.

SO_CVTIMEO AND SO_NDTIMO socket options: These two socket options allow us to place a timeout on socket receives and sends. Notice that the arguments to the two sockopt functionsis a pointer to a timeval structure, the same one used with select. This lets specify the timeout in seconds and microseconds.