One of the most difficult intellectual exercises in immunology is to try to understand the global organization and control of the immune system.

One of the most difficult intellectual exercises in immunology is to try to understand the global organization and control of the immune system. Its extreme complexity and the wide array of regulatory circuits involved in fine-tuning the immune response pose a formidable obstacle to our understanding. A concept map depicting a simplified view of the immune system is reproduced in Figure 1.1. 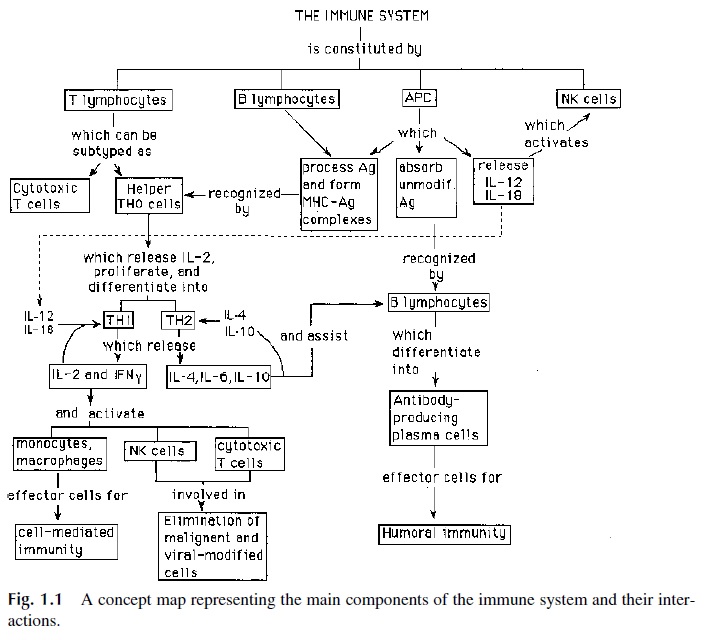 If we use as an example the activation of the immune system by an infectious agent that has managed to overcome the innate anti-infectious defenses, the first step must be the uptake of the infectious agent by a cell capable of presenting it to the immune system in fa-vorable conditions for the induction of an immune response. In the case of T lymphocytes, APCs expressing MHC-II molecules play this role. A variety of cells can function as APCs, including tissue macrophages, B cells, and dendritic cells. Those cells adsorb the infectious agent to their surface, ingest some of the absorbed microorganism, and process it into small antigenic subunits. These subunits become intracellularly associated with histocompatibil-ity antigens, and the resulting complex is transported to the cytoplasmic membrane, allow-ing stimulation of helper T lymphocytes. The interaction between surface proteins ex-pressed by antigen-presenting cells and T lymphocytes as well as cytokines released by the antigen-presenting cells act as costimulants of the helper T cells. How antigen is presented to B cells is not very clear, but it is well established that the activation of an immune re-sponse takes place in a lymphoid organ (lymph node, peri-intestinal lymphoid tissues, spleen). All cellular elements necessary for the inductive and effector stages of an immune response are present on the lymphoid tissues, where there is ample opportunity for interac-tions and cooperation between those different cells.

Once stimulated to proliferate and differentiate, helper T cells become able to assist the differentiation of effector cells. However, not all helper T cells seem to assist all types of effector cells that require their help. Activated TH1 helper lymphocytes secrete cytokines that act on a variety of cells, including macrophages (further increasing their level of acti-vation and enhancing their ability to eliminate infectious agents that may be surviving in-tracellularly), and cytotoxic T cells, which are very efficient in the elimination of virus-in-fected cells. In contrast, activated TH 2 helper lymphocytes secrete a different set of cytokines that will assit the proliferation and differentiation of antigen-stimulated B lym-phocytes, which then differentiate into plasma cells. The plasma cells are engaged in the synthesis of large amounts of antibody.

As stated earlier, antibodies are the main effector molecules of the humoral immune response. As specific antibodies bind to a microorganism and the complement system is ac-tivated, the microorganisms will either be ingested and destroyed by phagocytic cells or be killed by complement-mediated lysis or by leukocytes able to mediate ADCC.

Once the microorganism is removed, negative feedback mechanisms become pre-dominant, turning off the immune response. The downregulation of the immune response appears to result from the combination of several factors, such as the elimination of the pos-itive stimulus that the microorganism represented and the activation of lymphocytes with immunoregulatory activity that secrete cytokines that deliver inactivating signals to other lymphocytes.

At the end of the immune response, a residual population of long-lived lymphocytes specific for the offending antigen will remain. This is the population of memory cells that is responsible for protection after natural exposure or immunization. It is also the same generic cell subpopulation that may cause accelerated graft rejections in recipients of mul-tiple grafts. As discussed in greater detail below, the same immune system that protects us can be responsible for a variety of pathological conditions.