A. Specific and Nonspecific Defenses

Nonspecific defenses, which as a rule are innate (i.e., all normal individuals are born with them), include:

·              Ingestion and elimination of bacteria and particulate matter by granulocytes, which is independent of the immune response

Specific defenses, as a rule, are induced during the life of the individual as part of the complex sequence of events designated as the immune response. The immune response has two unique characteristics:

a.           Specificity for the eliciting antigen; for example, immunization with inactivatedpoliovirus only protects against poliomyelitis, not against viral influenza. The specificity of the immune response is due to the existence of exquisitely dis-criminative antigen receptors on lymphocytes. Only a single or a very limited number of similar structures can be accomodated by the receptors of any given lymphocyte. When those receptors are occupied, an activating signal is delivered to the lymphocytes. Therefore, only those lymphocytes with specific receptors for the antigen in question will be activated.

b.           Memory, meaning that repeated exposure to a given antigen elicits progressivelymore intense specific responses. Most immunizations involve repeated adminis-tration of the immunizing compound, with the goal of establishing a long-last-ing, protective response. The increase in the magnitude and duration of the im-mune response with repeated exposure to the same antigen is due to the proliferation of antigen-specific lymphocytes after each exposure. The numbers of responding cells will remain increased even after the immune response sub-sides. Therefore, whenever the organism is exposed again to that particular anti-gen, there is an expanded population of specific lymphocytes available for acti-vation, and, as a consequence, the time needed to mount a response is shorter and the magnitude of the response is higher.

B. Stages of the Immune Response

To better understand how the immune response is generated, it is useful to consider it as di-vided into separate sequential stages (Table 1.1). The first stage, induction, involves a small lymphocyte population with specific receptors able to recognize an antigen or antigen frag-ments generated by specialized cells known as antigen-presenting cells (APCs). 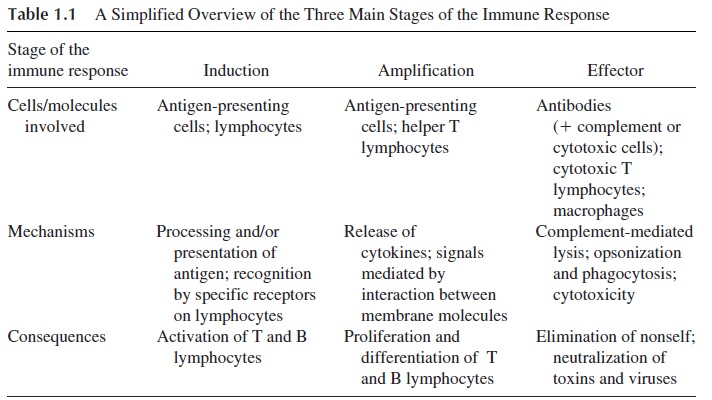 The pro-liferation and differentiation of APCs is usually enhanced by amplification systems in-volving the APCs themselves and specialized T-cell subpopulations (T helper cells, defined below). This is followed by the production of effector molecules (antibodies) or by the dif-ferentiation of effector cells (cells that directly or indirectly mediate the elimination of un-desirable elements). The final outcome, therefore, is the elimination of the organism or compound that triggered the reaction by means of activated immune cells or by reactions triggered by mediators released by the immune system.