Discussion of this gas power cycles will involve the study of those heat engines in which the working fluid remains in the gaseous state throughout the cycle. We often study the ideal cycle in which internal irreversibilities and complexities (the actual intake of air and fuel, the actual combustion process, and the exhaust of products of combustion among others) are removed. We will be concerned with how the major parameters of the cycle affect the performance of heat engines. The performance is often measured in terms of the cycle efficiency.

Ø The cycle is defined as the repeated series of operation or processes performed on a system, so that the system attains its original state.

Ø  The cycle which uses air as the working fluid is known as Gas power cycles.

Ø In the gas power cycles, air in the cylinder may be subjected to a series of operations which causes the air to attain to its original position.

Ø The source of heat supply and the sink for heat rejection are assumed to be external to the air.

Ø The cycle can be represented usually on p-V and T-S diagrams.

Ø Cycle does not involve any friction

Ø All expansion and compression processes are quasi-equilibrium processes

Ø Working fluid remains a gas for the entire cycle

Ø Air is the working fluid, circulated in a closed loop, is an ideal gas

Ø All cycles, processes are internally reversible 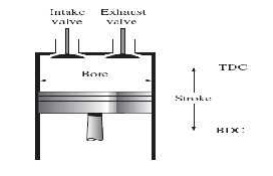 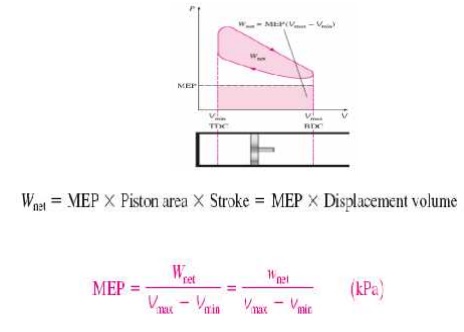 CYCLES AND THEIR CONCEPTS

Ø Petrol and gas engines are operated on this cycle 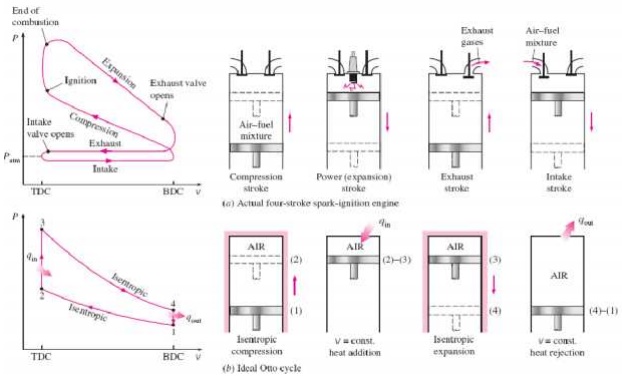 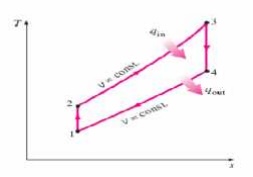 The Diesel cycle is a co mbustion process of a reciprocating internal co mbustion engine. In it, fuel is ignited by hea t generated during the compression of air in the combustion chamber, into which fuel is t hen injected. 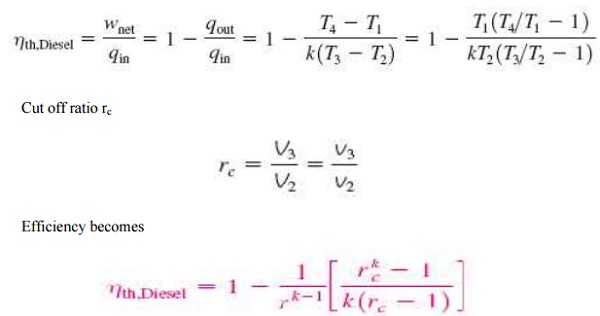 The dual combustion cycle (also known as the limited pressure or mixed cycle) is a thermal cycle that is a combination of the Otto cycle and the Diesel cycle. Heat is added partly at constant volume and partly at constant pressure, the advantage of which is that more time is available for the fuel to completely combust. Because of lagging characteristics of fuel this cycle is invariably used for diesel and hot spot ignition engines.

Ø Combination of Otto and Diesel cycle.

The Brayton cycle is a thermodynamic cycle that describes the workings of a constant pressure heat engine. Gas turbine engines and airbreathing jet engines use the Brayton Cycle. Although the Brayton cycle is usually run as an open system (and indeed must be run as such if internal combustion is used), it is conventionally assumed for the purposes of thermodynamic analysis that the exhaust gases are reused in the intake, enabling analysis as a closed system. The Ericsson cycle is similar to the Brayton cycle but uses external heat and incorporates the use of a regenerator. 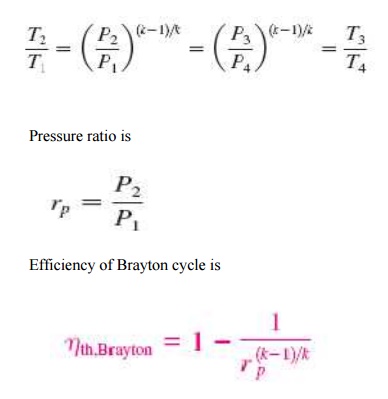 Ø TDC: Top Dead Center: Position of the piston where it forms the smallest volume

Ø BDC:  Bottom Dead Center: Position of the piston where it forms the largest volume

Ø Stroke:  Distance between TDC and BDC

Ø MEP: mean effective pressure: A const. theoretical pressure that if acts on piston produces work same as that during an actual cycle

Ø Gas Power Cycles: Working fluid remains in the gaseous state through the cycle. Sometimes useful to study an idealised cycle in which internal irreversibilities and complexities are removed. Such cycles are called:Air Standard Cycles

Ø  The mean effective pressure (MEP): A fictitious pressure that, if it were applied to the piston during the power stroke, would produce the same amount of net work as that produced during the actual cycle.

Ø  Boundary: System is a fixed and identifiable collection of matter enclosed by a real or imaginary surface which is impermeable to matter but which may change its shape or volume. The surface is called the boundary

Ø Surroundings: Everything outside the system which has a direct bearing on the system's behavior.

Ø Extensive Property: Extensive properties are those whose value is the sum of the values for each subdivision of the system, eg mass, volume.

Ø Intensive Property: Properties are those which have a finite value as the size of the system approaches zero, eg pressure, temperature, etc.

Therefore to define the state of system, the system must be in equilibrium. Inequilibrium of course implies non-uniformity of one or more properties).

Ø Isentropic flow: An isentropic flow is a flow that is both adiabatic and reversible. That is, no heat is added to the flow, and no energy transformations occur due to friction or dissipative effects. For an isentropic flow of a perfect gas, several relations can be derived to define the pressure, density and temperature along a streamline.

1. In an Otto cycle air at 1bar and 290K is compressed isentropic ally until the pressure is 15bar The heat is added at constant volume until the pressure rises to 40bar. Calculate the air standard efficiency and mean effective pressure for the cycle. Take Cv=0.717 KJ/Kg K and Runiv = 8.314KJ/Kg K.

2. Estimate the lose in air st andard efficiency for the diesel engine for the c ompression ratio 14 and the cutoff change s from 6% to 13% of the stroke. 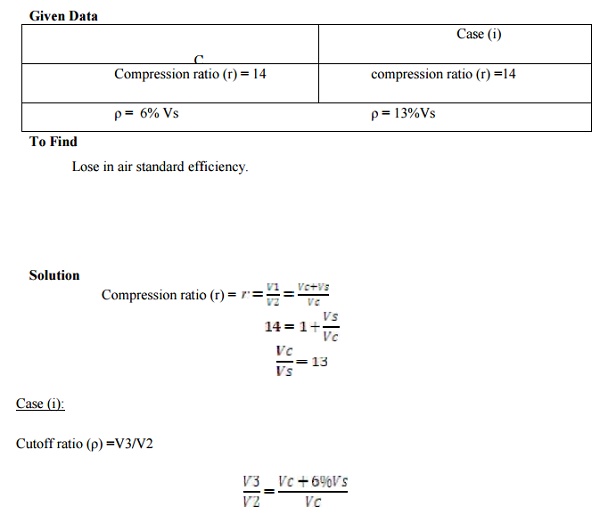 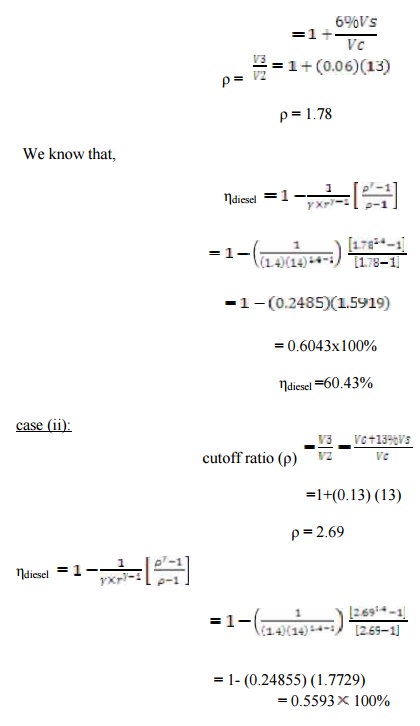 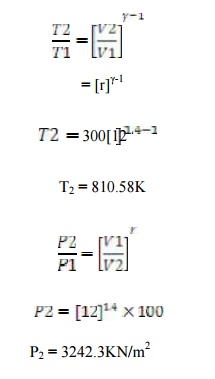 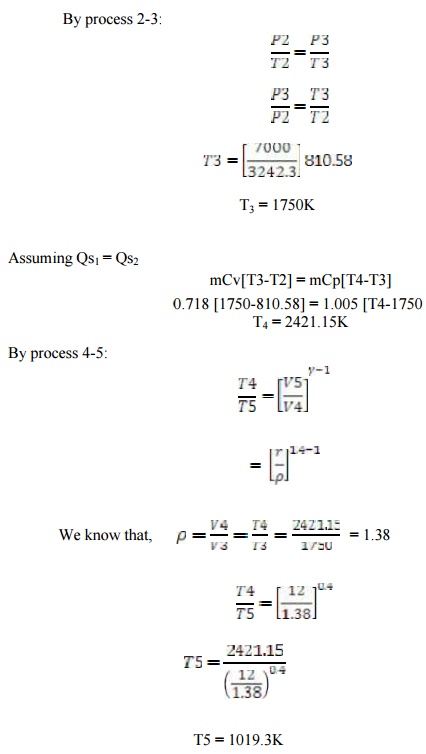 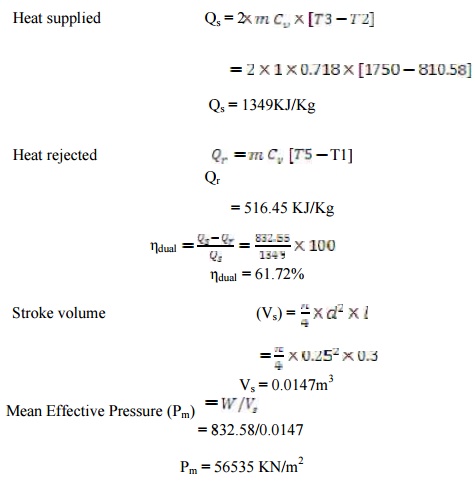 4.A  diesel  engine  operating an  air  standard  diesel cycle  has 20cm  bore  and 30cmstroke.the clearance volu me is 420cm3.if the fuel is injected at 5% of the stroke,find the air standard efficiency. 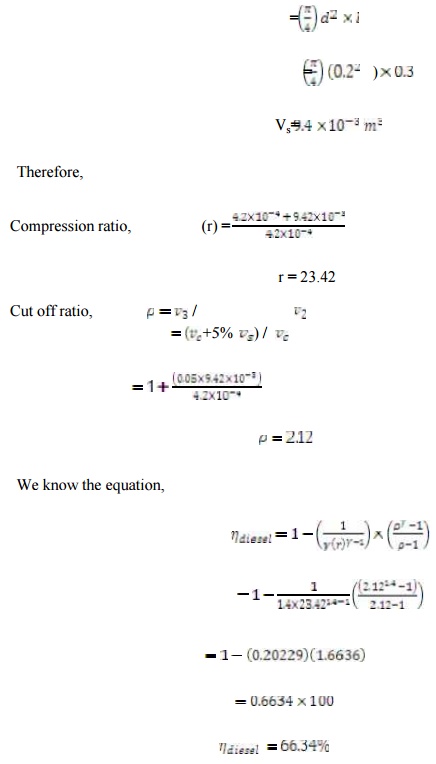