Transmission through autonomic ganglia is more com-plex than neurotransmission at the neuromuscular and postganglionic neuroeffector junctions and is subject to numerous pharmacological and physiological influ-ences.

Transmission through autonomic ganglia is more com-plex than neurotransmission at the neuromuscular and postganglionic neuroeffector junctions and is subject to numerous pharmacological and physiological influ-ences. In some ganglionic synapses, especially at parasympathetic ganglia, there is a simple presynaptic to postsynaptic cell relationship; in others, the presyn-aptic to postsynaptic cell relationship may involve neu-rons interposed between the presynaptic and postsy-naptic elements (interneurons).

In a variety of sympathetic and certain parasympa-thetic ganglion cells (e.g., vagal ganglia in the sinoatrial node), cells exhibiting the characteristic catecholamine fluorescence spectrum have been found. These cells are referred to as small intensely fluorescent (SIF) cells. At some autonomic ganglia, the SIF cell is a true interneu-ron, receiving afferent innervation from preganglionic cholinergic neurons and forming efferent synapses with postganglionic neurons. At other autonomic ganglia, its function is not completely understood, but the SIF cell is believed to play a role in the modulation of ganglionic transmission. Many SIF cells are thought to contain dopamine or norepinephrine as their neurotransmitter.

The interaction of ACh with the postsynaptic nicotinic receptor results in depolarization of the membrane, an influx of NA+ and Ca++ through a neuronal nicotinic re-ceptor channel, and the generation of the fast EPSP. This change in postsynaptic potential is principally re-sponsible for the generation of the propagated action potential in the postganglionic neuron. Generally, sev-eral presynaptic terminals innervate a single ganglion cell, and several preganglionic axon terminals must fire simultaneously for transmission to take place. Ganglionic blocking agents prevent transmission by in-terfering with the postsynaptic action of ACh. The drugs either interact with the nicotinic–cholinergic receptor itself or with the associated ionic channel complex.

Interaction of ACh with the postsynaptic ganglionic cell muscarinic receptor is responsible for slowly devel-oping depolarization, the slow EPSP, which has a longer latency than the fast EPSP and a duration of 30 to 60 seconds. The slow EPSP is due to inhibition of a voltage-dependent K+ current called the M current, and inhibi-tion of the M current involves activation of G proteins. At least five types of muscarinic receptors (M1, M2, M3, M4 and M5) have been identified using functional stud-ies and at least five subtypes (m1, m2, m3, m4, and m5) identified by molecular cloning techniques. The M1 re-ceptor, which appears responsible for inhibiting the M current, can be blocked by atropine.

Release of ACh may activate SIF cells between pre-ganglionic and postganglionic neurons. In this case, acti-vation of a muscarinic receptor on the SIF cells results in the release of a catecholamine; this in turn activates a receptor on the postganglionic cell, leading to the slow IPSP. The catecholamine most frequently released from SIF cells appears to be dopamine. Finally, a late slow EPSP, lasting for 1 to 2 minutes, can be seen at some ganglionic synapses. The mediator is unclear, but it is now well established that there are a large number of peptides in the ganglia, including luteinizing hormone– releasing hormone (LHRH), substance P, angiotensin, calcitonin gene related peptide, vasoactive intestinal polypeptide, neuropeptide Y, and enkephalin.

In addition to the cholinergic and adrenergic recep-tors on autonomic ganglion cells, there also appear to be receptors for a variety of excitatory and inhibitory sub-stances, including angiotensin, bradykinin, histamine, 5-hydroxytryptaimine (serotonin), and substance P. Theexistence of these receptors provides a wide variety of options to modulate ganglionic transmission. Agonists for these receptors most likely reach the ganglia through the circulation. A composite picture of the status of gan-glionic transmission is shown in Figure 14.1. For simplic-ity, the figure has been divided into a type A synapse, which includes SIF cells, and a type B synapse, which lacks SIF cells. Table 14.1 summarizes the type of gan-glionic action potential generated at various synapses, the type of receptor mediating the response, and the pri-mary transmitter or mediator that activates the receptor. 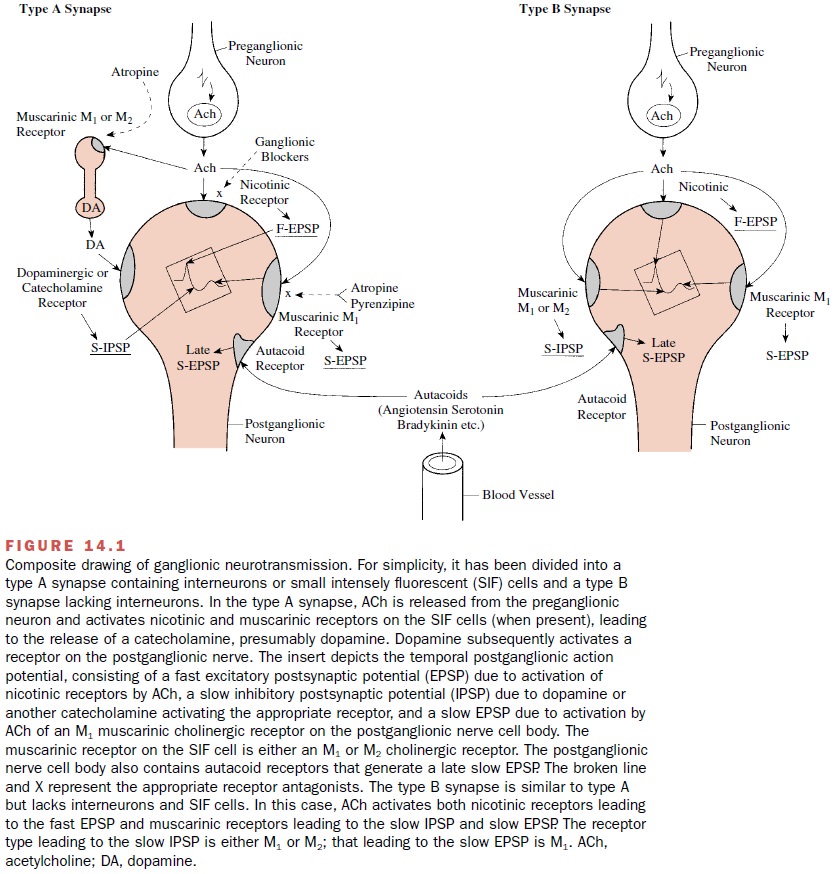