Although a number of drugs possessing ganglionic blocking properties have been developed, at the present time they are rarely used clinically.

Although a number of drugs possessing ganglionic blocking properties have been developed, at the present time they are rarely used clinically. Other drugs, such as curare, are not employed as ganglionic blocking agents, although they block ganglionic nicotinic receptors, es-pecially at high doses. The ganglionic blockers are still important in pharmacological and physiological re-search because of their ability to block autonomic ganglia.

Drugs can block autonomic ganglia by any one of sev-eral mechanisms. They may act presynaptically by af-fecting nerve conduction or neurotransmitter synthesis, release, or reuptake. Acting postjunctionally, drugs may affect the interaction between ACh and its receptor, or they may affect depolarization of the ganglion cell or initiation of a propagated action potential.

Ganglionic nicotinic blockers can be divided into two groups. The first group, characterized by nicotine and related drugs (e.g., lobeline, tetraethylammonium), initially stimulates the ganglia and then blocks them (discussed earlier). These agents are not therapeutically useful. The second group of drugs, which have some therapeutic usefulness but are rarely used, inhibit the postsynaptic action of ACh and do not themselves pro-duce depolarization, thereby blocking transmission without causing initial stimulation.

The site of action of many blocking drugs has been shown to be at the associated ionic channel rather than at the receptor. Prolonged administration of ganglionic blocking drugs leads to the development of tolerance to their pharmacological effects.

In any given tissue, the magnitude of the response produced by ganglionic blocking drugs depends largely on the quantity and relative proportion of the total autonomic input coming from sympathetic and parasympathetic nerves at the time of drug adminis-tration (Table 14.2). For example, if cardiac vagal tone is high at the time ganglion blockade is induced, tachycardia results. If heart rate is high, a decrease in rate may be seen. 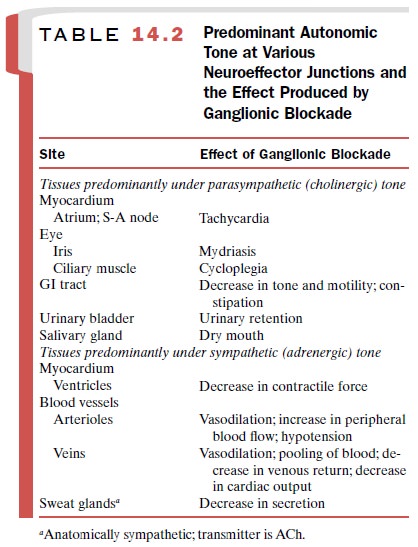 The extent of the hypotension, especially postural hypotension, produced by a ganglionic blocking agent also depends on the degree of sympathetic tone at the time of drug administration. For instance, patients with normal cardiac function may have their cardiac output diminished after ganglionic blockade, while patients in cardiac failure often respond to ganglionic blockade with an increase in cardiac output. To date, it has not been possible to develop ganglionic blocking drugs that have a high degree of selectivity for either sympathetic or parasympathetic ganglia. However, since these drugs do not affect all of the various ganglia equally, and since the time at which their peak effect occurs will vary among the various types of ganglia, some degree of se-lectivity of action does in fact exist.

Ganglionic blockers were once widely used in the man-agement of essential hypertension, and they constituted an important advance in the treatment of that disease. Unfortunately, the development of tolerance to these drugs and their numerous undesirable side effects re-sulting from their nonselective ganglion-blocking prop-erties led to a decline in their use. They have now been completely replaced by more effective and less toxic drugs. They do, however, retain some usefulness in the emergency treatment of hypertensive crisis.

Ganglionic blocking agents have been used to achieve controlled hypotension in plastic, neurological, and oph-thalmological surgery. They are most commonly used in surgical procedures involving extensive skin dissection.

All of the responses summarized in Table 14.2 can be produced by administration of ganglionic blocking agents. Many of these responses are undesirable effects that limit the therapeutic usefulness of these agents. Mild untoward responses include mydriasis, difficulty in vision accommodation, dry mouth, urinary hesitancy, constipation, diarrhea, abdominal discomfort, anorexia, and syncope. More serious but less frequent distur-bances include marked hypotension, constipation, par-alytic ileus, urinary retention, and anginal pain.