Here are the steps to write a bio-sketch.

A sample is given below.

Write the biography of R.K. Narayan in a paragraph, using the information given in the box.

R.K. Narayan, whose full name is Rasipuram Krishnaswami Narayan was born on October 10, 1906, at Chennai in Tamil Nadu. He is one of the finest authors of Indian writing in English. He completed his education in 1930 and worked as a teacher before he became an author. His first novel, ‘Swami and Friends’ written in 1935, is a narrative, recounting the adventures of a group of schoolboys. Most of Narayan’s works are set in the fictitious South Indian town of Malgudi. Narayan typically portrays the peculiarities of human relationships and the ironies of Indian daily life, in which modern urban existence clashes with ancient tradition. His style is graceful, marked by genial humour, elegance, and simplicity. He has written about 34 novels in addition to prose versions of two Indian epics, The Ramayana and The Mahabharata. He died on May 13, 2001 in Chennai.

a.        Given below are hints about a renowned British science fiction writer Arthur C. Clarke. Write a biographical sketch on the author in not more than 80—100 words based on the information given below. 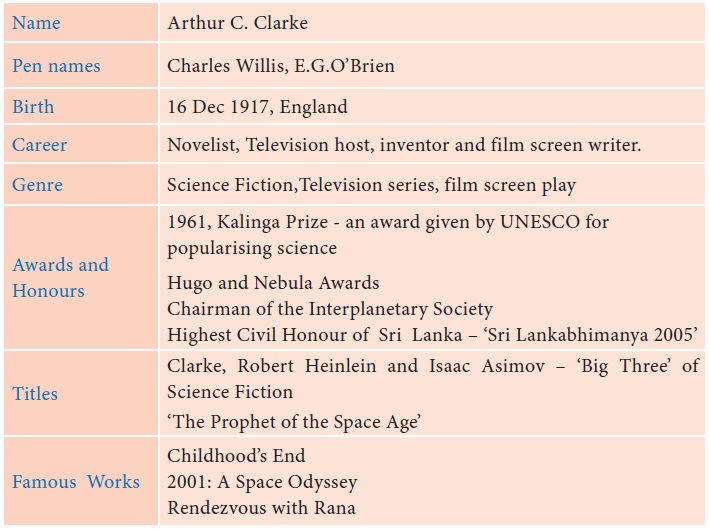 Arthur C. Clarke was bom in England on December 16, 1917. He established himself as a science fiction writer. He worked as a television host and film screen play writer. He wrote the novels Childhood’s End and 2001: A Space Odyssey. In 1961, he was awarded the Kalinga Prize, by UNESCO for popularizing science among the leading circle. He won liis first Hugo award in 1956 for his short stoiy “The star”. He won both the Nebula and Hugo awards for his novel “Rendezvous with Rama” in 1973. During the last decade of his life he was knighted by the British High Commissioner. In Sri Lanka he was granted the highest civil honour “the Sri Lankabhimnya 2005”. Clarke, Robert Heinlein and Issac Asimov were known as the “Big Three” of science fiction. He was the chairman of the British Interplanetary Society from 1946 -47 to 1951 -53.

·           The first step is to collect relevant material or information.

·           The next step is to organize the collected information and put it together in an outline.

·           A report can be written about an incident, accident or a natural calamity, or a coverage of an official function or the visit of a dignitary etc.

While collecting facts and writing a report, remember to check and include the following.

·           Correctness of facts (authenticity) or accuracy should be ensured to avoid legal complications.

·           Main text should include three components – introduction, discussion and conclusion.

The main parts of the report are:

Read the following report by Dinesh on the 50th Annual Day of his school.

On 10th August, 2018, a colourful and memorable Golden Jubilee Annual Day event was organized in our school. This event was held in the auditorium of our school. Many eminent personalities and educationists graced the occasion. The District Collector, who was the Chief Guest, inaugurated the function. It began with a prayer, hailing the goddess of knowledge and wisdom. This was followed by a colourful welcome dance by the students of kindergarten. The Principal welcomed the gathering, after which all the invitees were felicitated. The cultural programme, which followed, was a truly mesmerizing show. The cultural programme included items such as singing, dancing, poetry recitation, skits, mimicry and mono act shows. The audience sat enthralled by the show. In his address, the Chief Guest praised the efforts of the students and teachers alike. This was followed by prize distribution to teachers and students, for their achievements. The programme concluded with the vote of thanks proposed  by the School Pupil Leader.

a. You have recently attended a seminar on ‘Science and Literature’ in which writers presented  papers on Science Fiction and literature and focused on the creativity of young writers. Write a short report about it for a leading newspaper in about 100—120 words.

A SEMINAR ON “SCIENCE AND LITERATURE”

A Seminar on science and literature was conducted at Jamal Mohamed College on 18th July. Ten lecturers from different colleges presented papers explaining the relationship between science and literature. One teacher discussed the writings of II.G.wells. His novel ‘Time Machine’ is a very interesting work. The hero of the novel invents a machine which can travel over ime, and the hero travels into future and witnesses the life of the people. People in future will be very weak and fragile and they will not be able to bear sunlight.

Another lecturer focused on Isaac Isimov’s short story ‘The Fun They Had’. In the year 2157 children will not go to school but they will learn from the computer and internet. Margie’s classroom is only next to her bedroom. The children find a written book from the grandfather’s attic any they are surprised that the letters do not move. Science Fiction is highly imaginative and it motivates readers to think about the good and bad effects of science.

Thus, from the seminar 1 was enabled to appreciate the relationship between science and literature.

b.You are the School Pupil Leader. Your school organised an Inter-School Sports event at Nehru Stadium. Write a report on the special events conducted in 100—120 words for the school souvenir.

The much awaited Annual Sports Day of our school was held on Tuesday, October 18, 2018. The meet was inaugurated by our Headmistress Mrs.Mangalam. The students entered the spirit of the occasion in a grand way commencing with March Past of the five contingents of different houses Blue, Red, Yellow, Green and White. Our Headmistress Ma’am took the salute of the impressive March Past and also administered the oath. She declared the Meet open by releasing the balloons. The event included races in categories of 400mtrs, 200mtrs, lOOmtrs dash and 4xl00mtrs relay for boys as well as girls. The competitors participated with great excitement in the track and field events. The winners were awarded medals and certificates of merit. Outstanding Sports Performance awards were given to sports persons who have excelled in their respective fields at the State and National level. Blue House raised the 2016-17 Cultural Trophy as well as the Sports Trophy. The day ended on a cheerful note as the Physical Director, who declared that the Meet closed. And at last, the Headmistress declared that the next day (Wednesday) as a holiday, all the students clapped endlessly. .