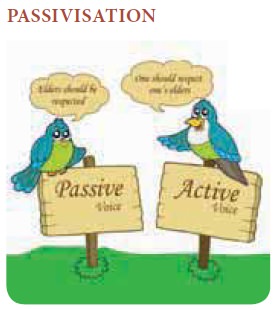 We use the active form to say what the subject does.

For example— I speak English everyday.

We use the passive form to say what happens to people and things - to say what is done to them. For example—English is spoken by me everyday.

A. Identify the changes in these pairs of active and passive constructions.

The airplane was flown to Bengaluru by the pilot.

The monkeys ate the bananas.

B. Change the voice of the following sentences.

The rules are followed by Mohammed.

The course has been completed by Mohan.

The prayer is being sung by Magadalence.

By whom was this complaint written?

May you be blessed with happiness by God.

They are constructing a house.

Do not slam the door.

The coach trained the team.

C. Make sentences using the passive forms of the verbs.

Tagore was awarded the Nobel Prize.

IIM Ahemadabad was established in 1961.

Chattisgarh was formed in 2000.

The first passenger train was inaugurated in India in 1853.

D. Look at the newspaper items given below. Use the information in the headlines to complete the sentence.

Heavy rains lashed Chennai last night. The normal life of people is heavily affected. The city is floating in the heavy rains now.

Two buses collided with each other at Chennai to Trichy by-pass near Perambalur last night. About 12 persons were injured and they had been admitted to hospital.

E. Expand the following news headlines in a sentence.

The State Election Commission announced that municipal elections would be held in the month of December.

Regional Director of Bharath Sanchar Nigam Limited announced that the customers of BSNL would get video phone facility soon.

Anu and her little brother want to refresh themselves with a hot cup of tea during study time. Help them prepare tea. Given below are the steps/instructions to make two cups of tea.

1. Complete the passage by filling the blanks with the passive forms of the verbs.

2. Here is a recipe to make chocolate cake in a pressure cooker. Rewrite the instructions in passive voice. The first one has been done for you.

v.               Heat the pressure cooker, covered with the lid but without the pressure, for 3-4 minutes on high heat. Then place the cake tin in the empty cooker (Do not add water in the cooker).

The flour, cocoa powder and baking powder are first sifted in a mixing bowl.

v.               The pressure cooker is covered with the lid and is heated without pressure for about 3-4 minutes on high heat. Then the cake tin is placed in the empty cooker without adding water.

3. Write the process of wrapping a Christmas gift in a paragraph in passive form, with the help of the pictures given below. 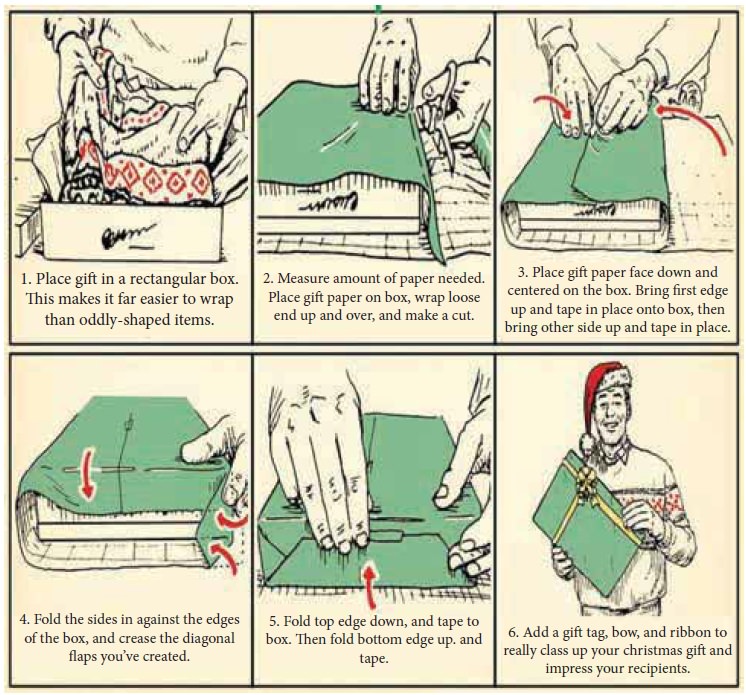 1.         The gift is placed in a rectangular box. This makes it easier to wrap than oddly shaped boxes.

2.         Then the amount of paper needed is measured and cut. The gift is placed on the paper and the loose end is wrapped up and over after which a cut is made.

4.         Then the sides are folded in against the edges of the box and the diagonal flaps are creased.

6.         At last a gift tag, bow and a ribbon are added to make it look classy and impress the recipients.

When you write a sentence you must make sure that the subject and the verb agree.

·           ’units of measurement and mathematical expressions

·           nouns connected with each of, each one, either of, neither of, someone, something, anybody, anything, no one, nothing, everybody, everything

A.      Underline the correct verb in these sentences.

1.        The girl and her sisters watch (watch, watches) television everyday.

B. Correct the following passage.

Where do does the deer and the antelope play? One place is Yellowstone National Park. It was were created in 1872. Parts of the park is in Wyoming, Montana and Idaho. The park are a safe place for many animals. Bears, mice, buffaloes imoose, buffalo, buffalo, deer and antelope live lives there. Beavers, otters, fish and eagles also enjoy enjoys the park. For them, Yellowstone is be ‘home sweet home.’