We can therefore identify different feeding types in an ecosystem, based on how the organism obtain (gets) its food. They are producers and consumers.

Producers are organisms that are able to produce their own organic food. They do not need to eat other organisms to do this. Producers are also called autotrophs. Can you name an organism that prepare it’s own food?

Plants are producers because they make their own food by photosynthesis.

What do plants need in order to photosynthesis?

There are many types of consumers and we can classify them into specific groups depending on the food that they consume. These are:

Animals that eat both plants and animals e.g: Humans, dog and crow

In a forest, deer eats grass; and in turn we know tiger eats deers. In any ecosystem there is a chain like relationship between the organisms that live there. This sequence of who eats whom in an ecosystem is called as food chain.

It describes how organisms get energy and nutrients by eating other organisms. 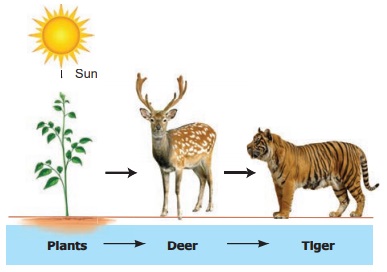 The food chain begins with the energy given by the Sun. Sunlight triggers photosynthesis in plants. The energy from the Sun is stored in the plant parts. When the grasshopper eats the grass, the energy flows from grass to grasshopper. Frog gets energy by eating grasshopper. This energy is transferred to a crow, when the frog is eaten by a crow. Thus we conclude the primary energy production in the world of living things is made by plants; that is by photosynthesis. 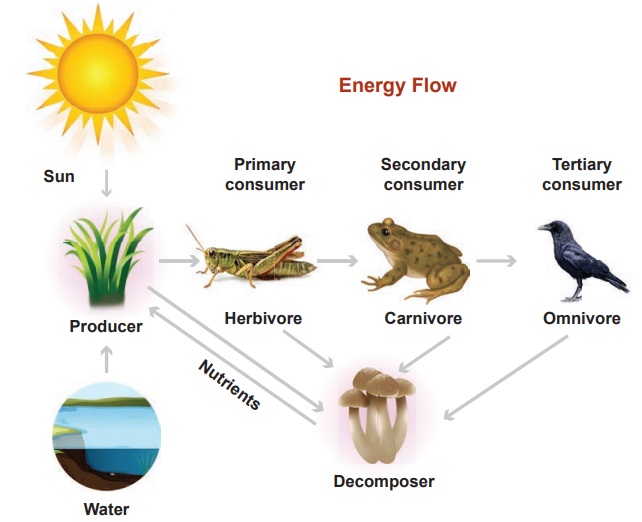 The micro organism reduce the excreata and the dead bodies of animals into primary simple components and puts them back into soil. It is this material that help the plants to grow. Thus we can see that there is a cycle of materials from primary producers to highest level predators, then back to soil.

Each of these levels in the food chain is called a trophic level. 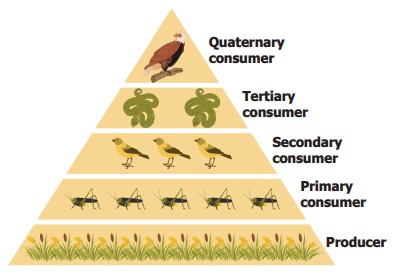 Organism uses up to 90% of its food energy for its life processes. Only about 10% of energy goes into new body cells and will be available to the next animal when it gets eaten. This loss of energy at each trophic level can be shown by an energy pyramid.

A rat eats grains; and in turn we know snake eats rat. Now snake is a prey for peacock and in turn peacocks are easy prey for tigers and leopards. Now think? Do tigers have any natural predators?

1 .Learning food chain help us to understand the feeding relationship and interaction between organisms in any ecosystem.

2. Understanding the food chain also helps us to appreciate the energy flow and nutrient circulation in an ecosystem. This is important because pollution impacts the ecosystem. The food chain can be used to understand the movement of toxic substances and their impacts.

Consumers have different sources of food in an ecosystem and do not rely on only one species for their food. If we put all the food chains within an ecosystem together, then we end up with many interconnected food chains. This is called a food web.

A food web is very useful to show the many different feeding relationships between different species within an ecosystem.

Activity 2: Take a square paper. Fold its diagonals. Draw three lines in three triangles as shown in the picture.

Cut from the edge of the diagonal to the center as shown in the picture.

If you fold this triangle and paste behind the third triangle you get a pyramidal shape.

In one of the triangles, draw images of each of the organisms in the different levels. 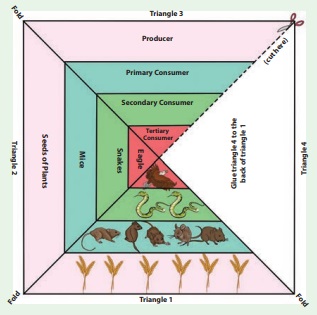 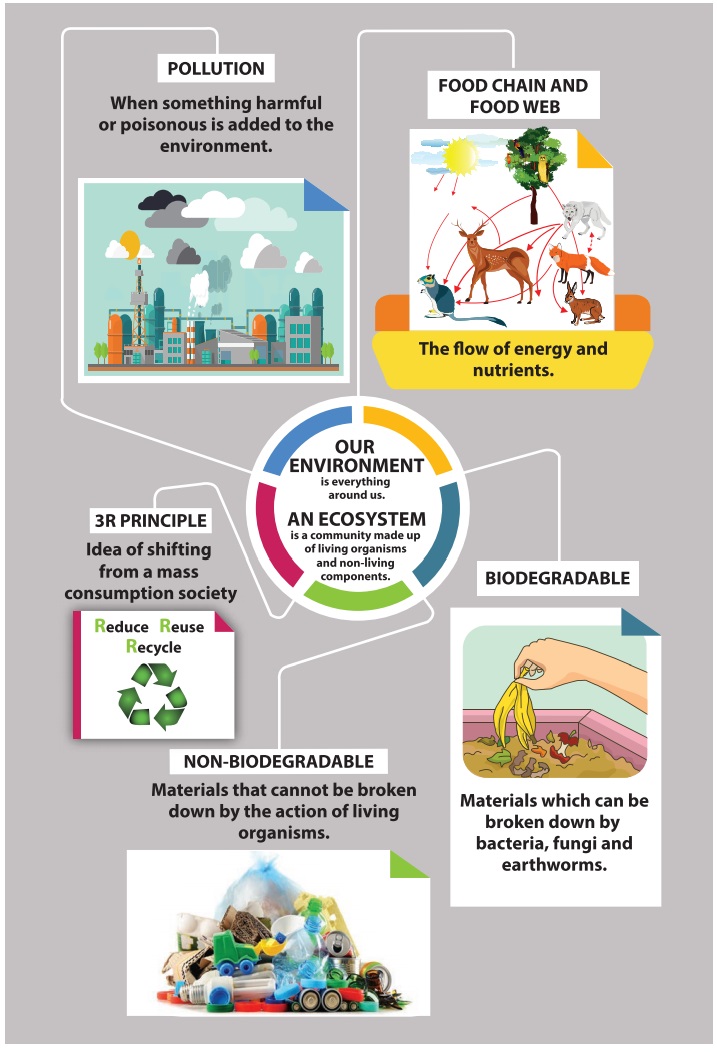 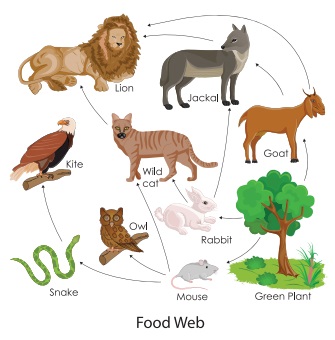