It was a sunny afternoon, after a long time in Ooty. Arul and Amudha were sitting on their balcony.

It was a sunny afternoon, after a long time in Ooty. Arul and Amudha were sitting on their balcony. The last three vacations were very exciting for them as they were involved in solving three mysterious cases in their city. They missed their friends - Sreejith, Jessy, and Fathima.

They called themselves ‘The Five Detectives’ or 5D. They were famous in Ooty for their courage and skill. The police appreciated 5D for their admirable acts. Amudha and Arul missed Pablo. Pablo was Sreejith’s dog. He played an important role in solving the mysteries. 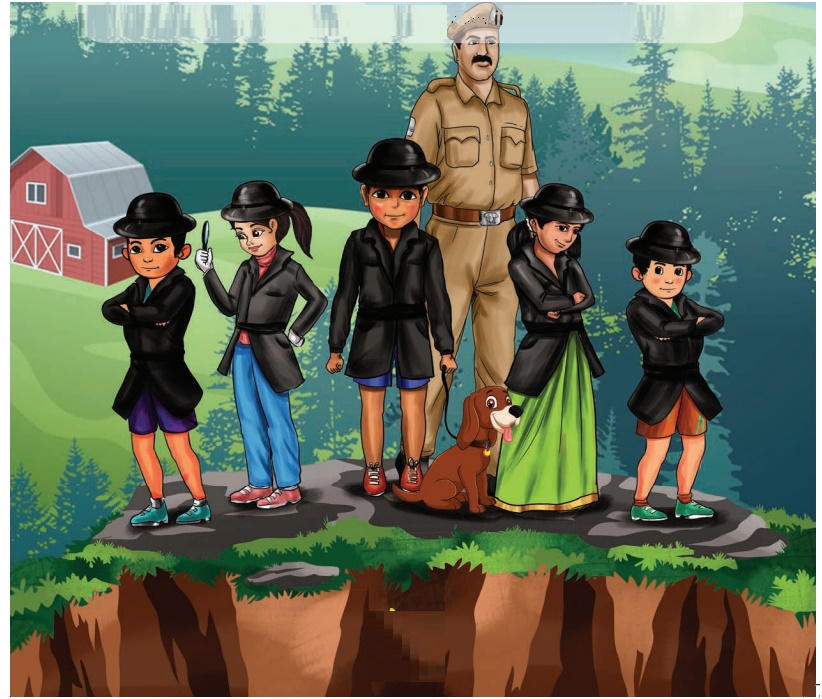 Sreejith, Jessy, Fathima and Pablo came to Amudha and Arul’s house. Pablo was jumping with joy and continuously wagging his tail.

Amudha:  I am so happy to see you all.

Arul: Now we can all head to solve a mystery. It will make our vacation interesting.

Sreejith: Mystery? Did something happen in the town while I was gone?

Arul: No, Sree. Nothing at all

Amudha urged that they all go the town's fair. She told them about different games, magicians and most importantly the ‘Waxworks’, a studio with many wax figures inside. After a lot of pestering, everyone agreed to go. On their way back, they saw Inspector Velayudham on his bike. He was the inspector of the area. "Inspector Velayudham has been very busy these days," said Amudha. This made the group curious about what was happening in their city that they had no clue of.

Jessy overheard her father talking on the phone about a robbery that was expected to take place in the museum. Jessy rushed to see her friends in the morning and told them what she heard.

Sreejith: Oh, now I know what Inspector Velayudham is up to.

Jessy: Let us solve this case before he does.

Sreejith: I feel we will find more clues if we are near the city area. We will also be able to observe more things. I will disguise myself as that old man we saw on the street.

Everyone agreed to it. Sreejith dressed as the old man. Sreejith sat on the old man’s bench, coughed and sniffed like him. No one could recognise Sreejith. Soon, a man on a cycle came and sat next to the old man. He said, “Where have you been since yesterday? Take this. 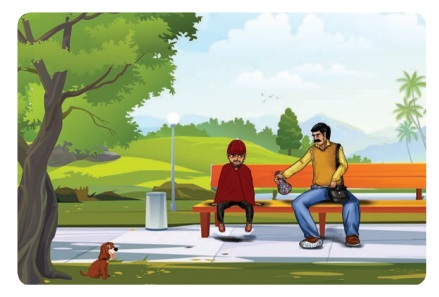 The man handed over Sreejith a packet of chocolate and went away.

Sreejith took the chocolate and kept it in his pocket. He saw the real old man coming in his direction from the other side. He also saw Inspector Velayudham rushing out of a shop towards him. Fathima and Jessy were watching all this from afar. They got worried and rushed with Pablo towards the Inspector. Pablo started barking and jumping on the Inspector. The inspector was annoyed with the dog. Sreejith saw it as a chance to run from there. He hid in a bush nearby. Inspector Velayudham ran towards the old man and caught him. Then, he asked him to give the chocolate to him. The old man was puzzled. Inspector took the old man to the Police station and locked him.

While this was happening, the 5D gathered in Jessy’s garage. They opened the chocolate to find a small chit. They opened it and found a list of grocery items. They were very confused.

Amudha:   I wonder if it is some kind of magic pen like the one you showed us. When we show it under a light, we can see the writing.

Jessy: It could be. I still have his pen with me. I will go and get it at once.

Jessy got the magic pen. They flashed the light on the paper, and some words glowed on it. The message said, “Tell Number 3. Waxworks. Tuesday. 9 PM. - Number 5”

Arul: Tomorrow is Tuesday. So the gang is meeting tomorrow.

While they sat in the garden.Inspector Velayudam saw Sreejith dressed as the Old man. He was furious. Then Sreejith had to confess. He handed over the chit to the inspector. The inspector was glad to have found the chit but was furious about their behavior. He warned them to stay away from the case.

Sreejith’s idea was to disguise himself as a wax statue. As it will be the most easy way to get all the information. That evening all of them went to ‘Waxworks’. They observed each wax statue and noted down details. While getting out of Waxworks, Sreejith unlocked one of the windows in the room.

He saw the Inspector inside Waxworks and had no way of getting in without being noticed. He was really sad and went home. In the morning, Sreejith heard the news of Inspector Velayudan arresting the three robbers and also the diamond necklace. Everyone was upset that they didn’t get the chance to solve the mystery. As they sat in Jessy’s living room, they overheard Jessy’s father on the call saying "Where is the real necklace?”

This news alarmed the 5D. Fathima told everyone to rush to the city as some message will be passed regarding this. Within no time, the 5D was in front of the old man’s bench. Everyone sat at different places to keep an eye on the man. After an hour, a man came and sat next to the old man. The old man was busy drawing something on the ground with his stick.

They noticed that inspector Velayudham was observing at a distance and started following that man. But they waited for the old man to leave and went to see what he had drawn on the ground and it said 'Waxworks'.

Sreejith: Amudha, if you were to place the diamond necklace in this place where would you place it? 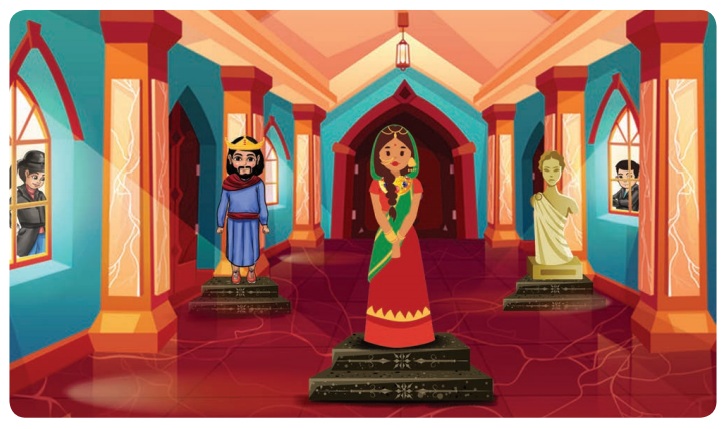 Amudha thought for a second and said, "On the princess statue. She already wears so many jewels that this will go unnoticed."

Everyone’s eyes lit up. They walked straight to the princess statue. They saw the diamond necklace. Sreejith carefully removed it and kept it in his pocket. As soon as they came out, there was a senior policeman standing. The children went straight to him and handed over the diamond necklace. They told him the whole story. They were appreciated for their courage and dedication towards their city.

overheard : to hear without the speaker’s knowledge

solve : to find the answer

sniffed : to smell by short inhalations